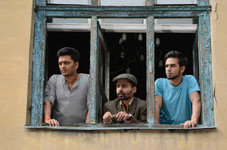 Zehra Abbas / fullhyd.com
EDITOR RATING
5.5
Performances
Script
Music/Soundtrack
Visuals
5.5
5.5
6.0
7.0
Suggestions
Can watch again
No
Good for kids
No
Good for dates
No
Wait to rent it
No
Bangistan is like a promising lab experiment that explodes with a "bang" in your face - right intentions but muddled execution. Just look at how good it is on paper: Two aspiring terrorists, Hafeez Ali and Praveen Chaturvedi (unaware of each other), live in the fictional country Bangistan, where the Hindus and Muslims are constantly at loggerheads. They are brainwashed into embarking on a suicide mission to Poland in order to disrupt a global religious conference that aims at creating peace between their faiths. To protect their identities, both men take on alter egos - Hafeez Ali becomes Ishwarchand Sharma (Riteish Deshmukh), while Praveen Chaturvedi turns into Allah Rakha Khan (Pulkit Samrat).

Fate brings the not-too-bright suicide bombers together, and they develop an instant sympathy for each other since they remind each other of "their people". A bromance ensues, and in the process of maintaining an authentic act, both men develop a deeper understanding of the religion that they are hell-bent on annihilating. Following this ideological shift, Hafeez and Praveen decide to combine saffron and green to create a new picture altogether.

So, the premise is entertaining enough, and considering that the film is a satirical comedy, you would think that the makers had struck gold. You'd be wrong.

The movie is a comedy that can't make up its mind about the track it wants to take - subtle satire or silly farce. In trying to straddle both, it trips and doesn't really get up again. Sure, there are funny moments - you'll enjoy the spoof on TVC ads when our terrorists go bomb-shopping (we take cash and crude oil), the "Star*ucks" and "FcDonalds" that Hafeez's rabid, America-hating leader loves (he takes only Diet Coke by the way), the tech-savvy Shankaracharyaji and Imam Saheb who are Skype buddies (both use only Apple gadgets incidentally), or the procession of religious leaders at the conference which is capped off by Darth Vadar (try telling a Star Wars fan that it's not a religion).

There's just one problem - even these don't really provoke laughter. Chuckles, sure - guffaws, no.

Then, there are the moments that don't even warrant a chuckle. The Citizen Husain nod to Citizen Kane made us yawn, the Hindi version of the iconic "You talking to me?" dialogue made us groan, and the terrorists stripping down to the same striped undies made us gape in disbelief. That's how they want to convey the idea of a shared humanity? Okay, then. Interestingly enough, they've conveyed a similar idea in a far more clever way - the fundamentalist leaders of Hafeez's and Praveen's terrorist outfits are played by the same actor, Kumud Misra.

But where, where are the truly comedic situations? Whatever happened to genuinely funny dialogue writing? And why does the pace of the film resemble a drone that sputters, spirals and then zooms off before you can say Bin Laden? Debutant director Karan Anshuman's inexperience peeks through the holes in the narrative, and it also shows in the performances of the ensemble.

Deshmukh does his best, but he seems miscast in the role of Hafeez, the serious, introspective and "reluctant" fundamentalist. Deshmukh is great at goofy, but Bangistan requires him to repress that natural gift. Also, his character arc in the second half of the film takes a trampoline jump that leaves him suspended in improbability. Samrat needs to tone down a tendency to overact, and it's telling that the makers didn't correct his hamming interpretation of the character's swagger. What was meant to be a yin-yang synergy between the actors turns into Chinese torture for the viewers.

Jacqueline Fernandez is like a breath of fresh air in a cameo as short as her outfits (she's the bomb), but it's a negligible, caricature of a role, and her waitress character unwittingly becomes a prime example of the film's banal treatment of the religious debate, when she says that she doesn't believe in any religion, but in being a good human being. Yes, you need a cup of Star*ucks at that point to rouse you.

Kumud Mishra is good, Chandan Roy Sanyal is wasted, and the other character actors seem content playing caricatures. Strange, considering that the film is critical of cultural and religious stereotypes.

The cinematography does a wonderful job of presenting both Ladakh and Poland beautifully. Ram Sampath's music is catchy and hummable enough, and the director's quiet nod to Wes Anderson is interesting. The use of saffron and green as motifs is appreciable, as is the symmetry in their usage. Sadly, the dual-coloured braid that the film creates so diligently is finished with a rather garish tassel at the end. Let's talk about the climax.

There is such a dramatic shift in the already confused tone and tenor of the film at the end, that you will be left asking yourself what the falafel just happened. The makers crammed every possible anti-terrorism, pro-unity message that they could think of into those fifteen minutes, threw in comedy, melodrama and action, and then ended it with an explosion that has the most unbelievable aftermath.

Bangistan has genuine sparks of brilliance every now and then, but it also has much that doesn't work well. Watch it if you're willing to tolerate the latter for the sake of the former. Karan Anshuman will hopefully continue to hone his craft and present a second film soon that will give us more "bang" for our buck. He's a brave man, considering that he used to be a film reviewer once and has now put his own ideas up for public scrutiny. And on that note, this reviewer would like to end with a prayer of thanks for her complete and utter lack of any filmmaking aspirations. Amen.
Share. Save. Connect.
Tweet
BANGISTAN SNAPSHOT 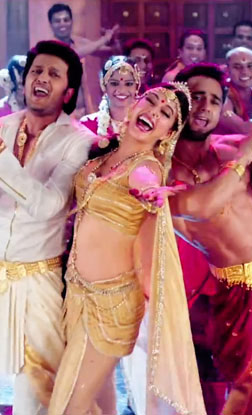 ADVERTISEMENT
This page was tagged for
Bangistan hindi movie
Bangistan reviews
release date
Riteish Deshmukh, Pulkit Samrat
theatres list
Follow @fullhyderabad
Follow fullhyd.com on
About Hyderabad
The Hyderabad Community
Improve fullhyd.com
More
Our Other Local Guides
Our other sites
© Copyright 1999-2009 LRR Technologies (Hyderabad), Pvt Ltd. All rights reserved. fullhyd, fullhyderabad, Welcome To The Neighbourhood are trademarks of LRR Technologies (Hyderabad) Pvt Ltd. The textual, graphic, audio and audiovisual material in this site is protected by copyright law. You may not copy, distribute, or use this material except as necessary for your personal, non-commercial use. Any trademarks are the properties of their respective owners. More on Hyderabad, India. Jobs in Hyderabad.