One Direction: This Is Us (3D) Review 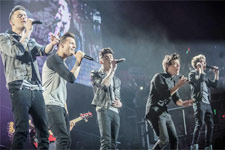 Nupur Barua / fullhyd.com
EDITOR RATING
7.0
Performances
Script
Music/Soundtrack
Visuals
8.0
7.0
7.0
7.0
Suggestions
Can watch again
Yes
Good for kids
Yes
Good for dates
Yes
Wait for OTT
No
It is likely, unless you are between 6 years and 16 years of age, and a girl, that you have never heard of One Direction. For the uninitiated, they are a big part of the "British invasion" in the USA, and they did not exist till about two years ago. What are they? Well, to put it generally, One Direction is a boy band of five boys aged 19 to 21.

They are more than the usual boy band, though, as one of the members points out in the concert film, One Direction: This Is Us. At the 2010 X Factor in the UK, five boys who had failed to make it to the finals as solo artistes were brought together to perform as a band at the Wembley Arena in London. This helped them qualify as contenders in the "group" category of the show, and although they did not win, they were quickly signed up by Simon Cowell, producer and TV personality, to record their debut album, Up All Night. Before one could compare them with Backstreet Boys and the likes, the debut single "What Makes You Beautiful" topped the UK Singles charts, and history was written.

The movie captures their lives during concerts, rehearsals and time spent with families, and also has footage from X Factor, and interviews with Simon Cowell and others. It begins with a collage of memories of these boys, and their aspirations as kids.

All of them come from working class families, and are not only shocked by their own popularity, but also prone to homesickness while on tours. Their mothers accompany them to certain countries, and they are equally surprised by how popular their boys are.

Niall Horan, 19, is from Ireland. He plays the guitar on stage, and he sings as well. Zayn Malik, 20, is of mixed heritage, and proud of it. His father is a British Pakistani. Liam Payne, 20, was a music technology student before he entered the band. Harry Styles, 19, was a baker and a part of a local band in his village. He is the one who came up with the name for the band. Louis Tomlinson, 21, dabbled in the world of acting before he auditioned for X Factor.

Together, these five boys, who did not know each other before they were thrust together as a band, are thicker than brothers, and each one of them is a prankster, driving their security and wardrobe crew up the wall with their antics.

The behind-the-scenes footage comprises a substantial portion of the movie. The idea is to make them lovable, and that is easy. To give the director credit, none of the sequences looks staged.

To add to the emotional angle, and maybe to humanise these superstars (because that is what they have become), there are interviews with family members and others from the regions that these boys belong to.

Nobody says a bad word about them, of course, but at no point will the kids irritate you. They are good at what they do, but they do not take life too seriously.

One Destination is then compared with The Beatles. While it may be too soon to comment on that, the fact remains that they have topped charts in about 37 countries across the world.

As the movie portrays, young girls from non-English-speaking countries know all the lyrics to all the songs by the band. Their reach is staggeringly wide. The boys cannot get over the adulation that they receive in various countries, but they acknowledge, more than once, the fact that their fans brought them to this level. "It is a team effort," one of them says, "between us and them".

Even while on tour, they make time for the hysterical, screaming young girls, who weep with joy when they manage a handshake or receive a smile from one of the band members. The makers interview a few fans, but the biggest surprise is the fact that Martin Scorsese and Chris Rock are followers, too.

The movie covers the story of One Destination from the beginning, even as it travels across continents with the band. There is enough coverage of their live concerts to make even the most cynical critic sit up and take notice of their talent and their following.

The music (mostly pop and teen rock) may or may not appeal to you, but the enthusiasm of the boys can get infectious. The best bits in the movie are the sequences in which the five boys let down their hair and chat with each other on various topics - there is a refreshing lack of ego tussles, and that makes them instantly likable.

What the movie misses out on, conveniently, is the darker side of fame. Everybody is always happy, and the film is almost a fluff piece. It is a well-known fact that Zayne Malik is a bit of a controversial figure on twitter. Also, the boys like to binge on alcohol and misbehave (albeit harmlessly) at music shows and parties.

Their personal lives are not all that great, either. Three of them come from broken homes. If the intention of the makers was to make them more human, then they could have incorporated some of the not-so-pretty aspects of their lives. In fact, one thing that is noticeable is the lack of offensive language, which is a part of growing up and definitely a part of the lives of the boys.

Also, the 3D seems rather forced. It works for the stage shows (a little on-your-face, but still...), but interviews and other footage can get a bit jarring. A 2D version would have worked equally well, and would have been less distracting.

So, even if you have never heard of One Destination earlier, and even if you detest boy bands and think they are overrated, One Destination: This Is Us should be in your list of movies to watch. Be prepared for a theatre filled with teenage girls swooning and screaming, though (apparently, the band is very popular in India).

Harry Styles, one of the band members, says, "A dream is only a dream...until you decide to make it real"; and this movie attempts to show you how nothing is impossible if you have what it takes to become what you want to be. Last heard, the collective personal wealth of the band members exceeded £25 million. How they went from small town boys to being compared with The Beatles is a story worth telling, and worth watching.
Share. Save. Connect.
Tweet
ONE DIRECTION: THIS IS... SNAPSHOT
ONE DIRECTION: THIS IS US (3D) SNAPSHOT 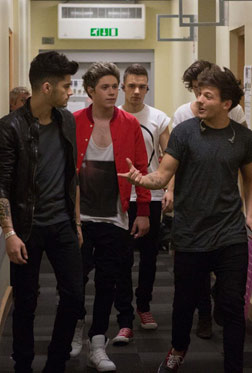 ADVERTISEMENT
This page was tagged for
One Direction: This Is Us (3D) english movie
One Direction: This Is Us (3D) reviews
release date
Niall Horan, Zayn Malik
theatres list
Follow @fullhyderabad
Follow fullhyd.com on
About Hyderabad
The Hyderabad Community
Improve fullhyd.com
More
Our Other Local Guides
Our other sites
© Copyright 1999-2009 LRR Technologies (Hyderabad), Pvt Ltd. All rights reserved. fullhyd, fullhyderabad, Welcome To The Neighbourhood are trademarks of LRR Technologies (Hyderabad) Pvt Ltd. The textual, graphic, audio and audiovisual material in this site is protected by copyright law. You may not copy, distribute, or use this material except as necessary for your personal, non-commercial use. Any trademarks are the properties of their respective owners. More on Hyderabad, India. Jobs in Hyderabad.