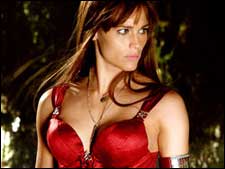 Ghazala Rizvi / fullhyd.com
EDITOR RATING
3.0
Performances
Script
Music/Soundtrack
Visuals
NA
NA
NA
NA
Suggestions
Can watch again
NA
Good for kids
NA
Good for dates
NA
Wait to rent it
NA
A narrative of great ingenuity, scary action sequences, entrail-twisting acting... if you are going to get a kick out of all these, you land a surprise. Elektra is all but electrifying in any way, and falls short of even a mediocre rating.

There are three ways of botching up a movie. Either the story is flimsy and scattered, or the performances are pathetic, or it's lacking in the visual or graphic finery of the day. Elektra scores an A on all these accounts. Though there is a story - the legend of the Marvel Comic character created by Frank Miller - the movie has transformed it into a complete drab.

Jennifer Garner is unleashed on the unsuspecting audience as Electra, and looks far removed from the original character of the legend. To portray somebody who has had an unhappy life, Jennifer takes an easy way out: she manages to look like a stunned zombie throughout the movie. So that takes care of the performance part.

Elektra prepares for her new job at a remote island to take on a new target. She does this by elaborately laying out her daily rations of fruit and healthy muffins, as well as new, factory-sealed toothbrushes and other toiletries, establishing the seriousness of her intentions.

Here she comes across Abby (Kristen Prout), the daughter of Marc (Goran Visnjic), and after overcoming some teenage hassles, becomes a favorite of the girl and the father. She then does a double hop and turns against her clients when she discovers that her newfound friends are to be the targets.

Hefty pauses, long and murky flashbacks from Elektra's life and flashes of conniption from Abby see the film through another half-hour. Suddenly remembering that Elektra is the super-killer set on a deadly mission, Krieger (Will Yun Lee) and his band of sidekicks are hastily pushed in.

This gives no breather to the audience, though bringing immense satisfaction to the filmmakers as they get a chance to spend a few more millions on the ludicrous action sequences. The villains compulsorily sport tattoos of animals, birds and death breaths, which are graphically brought to life but fail to jolt Elektra into putting some life into her act.

The film finally comes to a stop somewhere when the good guys dropping from air maroon the fleet of these animals, and everybody goes home. But not before mutating the terrific, lone and lithely stalking assassin of Marvel Comics into a moronic banshee.

Take my word - if you really want to enjoy Elektra, don't venture in the theater. Safely, grab a book.
Share. Save. Connect.
Tweet
ELEKTRA SNAPSHOT

ADVERTISEMENT
This page was tagged for
Elektra english movie
Elektra reviews
release date
Goran Visnjic, Jennifer Garner
theatres list
Follow @fullhyderabad
Follow fullhyd.com on
About Hyderabad
The Hyderabad Community
Improve fullhyd.com
More
Our Other Local Guides
Our other sites
© Copyright 1999-2009 LRR Technologies (Hyderabad), Pvt Ltd. All rights reserved. fullhyd, fullhyderabad, Welcome To The Neighbourhood are trademarks of LRR Technologies (Hyderabad) Pvt Ltd. The textual, graphic, audio and audiovisual material in this site is protected by copyright law. You may not copy, distribute, or use this material except as necessary for your personal, non-commercial use. Any trademarks are the properties of their respective owners. More on Hyderabad, India. Jobs in Hyderabad.