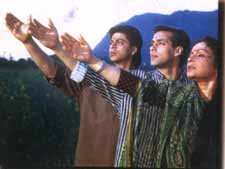 Christopher Domingo / fullhyd.com
EDITOR RATING
7.0
Performances
Script
Music/Soundtrack
Visuals
NA
NA
NA
NA
Suggestions
Can watch again
NA
Good for kids
NA
Good for dates
NA
Wait to rent it
NA
Picture a movie that has a mother praying to God to restore her dead sons, God actually doing that, and the sons then avenging their death in their previous birth. Sounds like a Ramsay flick, or, in any case, one that was made some 30 years back, right? With a story line like that, Karan Arjun became one the biggest hits of the nineties, frustrating again all theories being formulated about audience behavior.

One of the reasons was the star cast. Karan Arjun brought together for the first time on screen, the superstar Khans - Shahrukh and Salman. Then, the music was tops - Jaati Hun Main and Ranaji Maaf Karna are just two songs from the film that were runaway hits. A typical Hindi masala movie with loads of action and song and dance sequences, it was the treatment, the script and acting that made Karan Arjun better than the rest.

The story kicks off in rural India with brothers Karan (Salman) and Arjun (Shahrukh) and their loving mother Durga (Rakhee) living a content life as a happy family with a missing father. But soon it is revealed that the brothers are the only grandsons of the rich Thakur who, under the influence of his evil nephew Dhurjan Singh (Amrish Puri), had disowned his son for marrying the poor Durga.

The old man on his deathbed is repentant. Durga tells her sons that the evil Dhurjan killed their father, and heads off to meet their dying granddad. Dhurjan spoils the happy reunion - he murders the Thakur and, with the help of his brothers, brutally kills Karan and Arjun. Disillusioned and angry, Durga invokes the might of the Goddess Kali and pleads for the reincarnation of her sons.

Twenty-five years pass by and Durga's prayers are answered. Karan is reborn as Ajay, a professional street fighter with paramour Mamta Kulkarni, and Arjun is Vijay, an able stable hand in love with Kajol. Kajol happens to be betrothed to Dhurjan's son, and when she is forcefully taken away to Dhurjan's village, Vijay follows with friend Lingaiah (Johnny Lever).

On arrival, everything seems familiar, and eventually he meets Durga and his memories come back. He finds Ajay, and after a bit of convincing, his memory is refreshed too, and the stage is set for the final confrontation.

Like we said before, there is nothing new, but the controlled performances from Shahrukh, Salman and Rakhee, and a great music score, made Karan Arjun the hit that it was. It is not easy to handle two superstars, but Rakesh Roshan did great job of it, and was gifted with a movie that ran for over hundred days.
Share. Save. Connect.
Tweet
KARAN ARJUN SNAPSHOT

ADVERTISEMENT
This page was tagged for
Karan Arjun picture Hindi
karan arjun full movi stori hindi line
Karan Arjun hindi movie
Karan Arjun reviews
release date
Follow @fullhyderabad
Follow fullhyd.com on
About Hyderabad
The Hyderabad Community
Improve fullhyd.com
More
Our Other Local Guides
Our other sites
© Copyright 1999-2009 LRR Technologies (Hyderabad), Pvt Ltd. All rights reserved. fullhyd, fullhyderabad, Welcome To The Neighbourhood are trademarks of LRR Technologies (Hyderabad) Pvt Ltd. The textual, graphic, audio and audiovisual material in this site is protected by copyright law. You may not copy, distribute, or use this material except as necessary for your personal, non-commercial use. Any trademarks are the properties of their respective owners. More on Hyderabad, India. Jobs in Hyderabad.