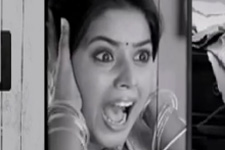 Kritika Deval / fullhyd.com
EDITOR RATING
6.0
Performances
Script
Music/Soundtrack
Visuals
8.0
5.0
6.0
7.0
Suggestions
Can watch again
Yes
Good for kids
No
Good for dates
Yes
Wait for OTT
Yes
An appetite that has been whetted to an optimum level and then left unsatisfied makes for a cranky viewer. And watching Avunu can leave you very cranky indeed.

Not that it is a bad movie. That's not what we mean at all. In fact, Avunu is that rare Telugu thriller that actually manages to do what thrillers are meant to, i. e. get your hindquarters to the edge of the seat, without sliding down to the meaningless mass of factory-outlet "scares" and the "shock" value of tomato ketchup-laden decapitated body parts.

Instead, it is subtlety - a commodity that is apparently in sporadic supply in the Telugu film industry - that Ravi Babu uses to take the viewers exactly where he wants them. And so you have an audience whose tension levels have been drawn tightly enough to be quivering like a high-pitched tuning fork. All of this is despite the fact that you'll find any number of "inspirations" to the movie ("The Shining", "Paranormal Activity", and even the hilariously non-scary "Hawa").

The story goes like this. Mohini (Poorna) and Harsha (Harshavardhan Rane) are newly-weds who've just moved to an isolated township in Hyderabad which has only three families living in the whole area. Sounds familiar, right? Another couple that lives there, with whom our turtledoves go on to get pretty tight, has a son who has started a new "game" of interacting with people he can't see, which his parents write off as a childhood phase.

Pretty soon the paranormal fun begins, with things going bump regardless of it being day or night. About a half-hour into the movie, the lecherous intents of our eeeeeevuuul spirit have been established, as he goes around playing peeping tom with the definitely peepable-at Mohini. The rest of the first half is filled with lots of spooky foreplay, metaphorically speaking, that leaves you pretty satisfied with what you've seen so far even though a few scenes do get rather repetitive.

Things speed up post interval. The tightly-knit plot, aided by symbolism-fortified cinematography, makes for a watch that provides chills and thrills without heading into cliché-land. And right when you're getting really really into it, everything just goes kaput with a brutally abrupt ending that saddens you just as much as it disappoints you.

We have a message for all those teachers who have brilliant students who don't quite manage to meet their potential. Dear teachers, we know exactly how you feel.

Avunu - with its surprising unpredictability, stellar cast, great screenplay, and a lack of lame song-and-dance sequences (for which we are extremely grateful) - had the potential to be a great movie. However, it has been let down by what we can only assume as being the writer's laziness towards the ending.

As far as the acting is concerned, Poorna almost entirely carries the movie on her dainty and capable shoulders as she works with her doe-like eyes and quivering lips to project every bit of her unease and fear onto the viewer. The little boy we mentioned earlier also needs watching out for. While all the men in the movie deal with their parts effectively, it is the women who really get to flex their thespic muscles.

There is so much about the film that works that the prematurely aborted ending really gets your goat. Also, it makes it really hard for you to figure out whether or not this is a good movie.

Go watch this one simply for the fun of watching a Telugu film that isn't built entirely around testosterone-y heroes. But also be prepared to cook up your own ending just so you won't die of frustration.
Share. Save. Connect.
Tweet
AVUNU SNAPSHOT 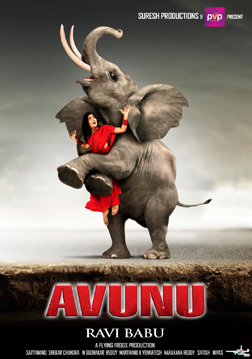 See Avunu full details
AVUNU USER REVIEWS
1 - 2 OF 2 COMMENTS
POSITIVE  |  NEGATIVE |  NEWEST  |  OLDEST  |  MOST HELPFUL  |  LEAST HELPFUL
USER RATING
7.0
2 USERS
Performances
Script
Music/Soundtrack
Visuals
NA
NA
NA
NA
Can watch again - NA
Good for kids - NA
Good for dates - NA
Wait for OTT - NA
Srinath on 25th Sep 2012, 8:29pm | Permalink
I actually liked the climax better. It would have been the boring stuff with the kid helping the damsel in distress to kill off the ghost, who cares. You wanted to be thrilled, you are. Now go home.
Praveen on 28th Sep 2012, 2:34pm | Permalink
We can always go home at our will. But I am talking people who prefer to watch it :-)
Praveen on 25th Sep 2012, 12:46pm | Permalink
Avunu.. It is difficult to tell whether this is a good movie or a bad one. First half is extremely disappointing. Second half is equally extremely engaging. Climax is so abrupt that you feel as if
i) you have got a life threating call and came out of the auditorium
ii) found that that is a wrong number
iii) you tried to come back to the auditorium only to know that the movie has ended right at the moment you came out of it.
You do not know whether to feel happy that the call was wrong or feel irritated that the director did not try to end the movie and left the job to you
RATING
6
LEAVE A COMMENT
fullhyd.com has 700,000+ monthly visits. Tell Hyderabad what you feel about Avunu!
MORE MOVIES
Latest Reviews
Jayeshbhai Jordaar
Sarkaru Vaari Paata
Doctor Strange In The Multiv...
Ashoka Vanamlo Arjuna Kalyan...
Runway 34
more
Heropanti 2
Acharya
Kanmani Rambo Khatija
Jersey (Hindi)
K.G.F. Chapter 2
Beast (Telugu)
Ghani
Fantastic Beasts: The Secret...
The Contractor
The Lost City
Contemporary Reviews
Vennela 1 1/2
Heroine
Dredd (3D)
Dredd (Hindi)
Rebel
more
OMG - Oh My God
Kamaal Dhamaal Malamaal
Arbitrage
Barfi
People's War
Life Is Beautiful (Telugu)
To Rome With Love
Raaz 3 (3D)
Raaz 3
Random Reviews
Allari
Avgat
Kalasukovaalani
Pellamtho Panenti
Sakhiya
more
Alexandra
Sobhana Ratrulu
Thulasi
Harry Potter And The Half Bl...
Riddick
Dawn Of The Planet Of The Ap...
Srimanthudu
Lion (English)
Shambho Shankara
Dolittle
SEARCH MOVIES
Dissatisfied with the results? Report a problem or error, or add a listing.
ADVERTISEMENT
SHOUTBOX!
{{todo.name}}
{{todo.date}}
[
ip{{todo.ip}}
]
{{ todo.summary }}... expand »
{{ todo.text }} « collapse
First  |  Prev  |   1   2  3  {{current_page-1}}  {{current_page}}  {{current_page+1}}  {{last_page-2}}  {{last_page-1}}  {{last_page}}   |  Next  |  Last
{{todos[0].name}}

ADVERTISEMENT
This page was tagged for
avunu
Avunu movie
Avunu
avunu movie
avunu telugu movie
Follow @fullhyderabad
Follow fullhyd.com on
About Hyderabad
The Hyderabad Community
Improve fullhyd.com
More
Our Other Local Guides
Our other sites
© Copyright 1999-2009 LRR Technologies (Hyderabad), Pvt Ltd. All rights reserved. fullhyd, fullhyderabad, Welcome To The Neighbourhood are trademarks of LRR Technologies (Hyderabad) Pvt Ltd. The textual, graphic, audio and audiovisual material in this site is protected by copyright law. You may not copy, distribute, or use this material except as necessary for your personal, non-commercial use. Any trademarks are the properties of their respective owners. More on Hyderabad, India. Jobs in Hyderabad.