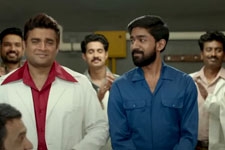 Punarvasu Pendse / fullhyd.com
EDITOR RATING
6.0
Performances
Script
Music/Soundtrack
Visuals
7.0
6.0
6.0
7.0
Suggestions
Can watch again
No
Good for kids
No
Good for dates
No
Wait for OTT
Yes
Rocketry: The Nambi Effect is the story of rocket scientist and aerospace engineer Nambi Narayanan - from his meteoric rise in ISRO as the first scientist to get accepted into an Ivy League institution, to the dark chapter in his life where he was accused of espionage and treachery, to his final redemption when he was exonerated of all charges and awarded a Padma Bhushan, India's third highest civilian honour.

Rocketry is R Madhavan's passion project - the veteran actor has directed, written, produced and starred in Narayanan's biopic. Madhavan, who has acted in Hindi, Tamil, Telugu, Malayalam, Kannada and even Malay (a language spoken in Indonesia, Brunei, Malaysia and Singapore) films, opted to shoot Rocketry in three languages simultaneously - Hindi, English, and Tamil.

Rocketry begins with the sudden arrest of Narayanan (R Madhavan) as his wife Meena (Simran) and their children can only watch in anguish. The entire movie is a flashback narrated during an interview with Shahrukh Khan (playing himself), before it turns on its head and leaps ahead.

Narayanan works with A P J Abdul Kalam in his (Narayanan's) stint with ISRO, is mentored by Vikram Sarabhai, and becomes the first scientist at ISRO to get into Princeton, where he learns about solid and liquid fuels which ultimately lead to his interest in cryogenics. The man single-handedly gets millions of dollars worth of free equipment to the Indian space mission from Scotland, is instrumental in getting dozens of Indian scientists access to the latest technology and education in France, and follows it up with securing Russian engines at a fraction of the cost that the West is offering them at. Everything seems to be going well, until it all comes crashing down due to baseless allegations.

Rocketry makes one thing clear - R Madhavan the director does not possess the flair that R Madhavan the actor does. Madhavan has this effortless charm that makes every scene he is in easy to watch, but the same cannot be said about his directorial prowess. Despite having a fantastic story to back up his film, Madhavan's Rocketry ends up looking simplistic and one-dimensional. The drama is heavy-handed, and there is no room for nuance - c

So characters in the film actually say "Nambi you are the real deal" or "Baadi teekhi cheez ho tum Nambi" as if the movie wants to cue the audience to be impressed. You get the same treatment when it comes to the emotional parts - the crew in the studio where the interview is being filmed start to get teary-eyed which is a cue for the audience to commence with the waterworks. Yours truly really felt like shouting here, "Please, the man is impressive enough by himself - we don't need cue cards to guide us on how to feel about his heroics."

At the same time, Rocketry is a celebration of a unique, talented Indian scientist - a man who sacrificed money, access to the latest and greatest technology, and the potential for better personal growth, just so he could make his country proud. Showing him let down by the very country he sacrificed everything for, the film is also a call for India to encourage its brightest minds. The last few minutes of the movie are an experience in themselves, and we are very glad Narayanan got a chance to tell his story.

Ultimately, Rocketry: The Nambi Effect falls short simply because it could have been a much superior film with the material it had at hand. A brilliant rocket scientist, the opportunity to film in several countries, espionage... the tale had all the elements to be either a riveting drama or a fantastic biopic. Rocketry, however, gets confused trying to do both - and ends up treading a safe middle ground.

Madhavan as the titular Nambi Narayanan is charismatic and sure of himself - portraying both the brash and the bent-down with equal elan. Simran portrays his partner Meena ably enough, but the movie is all about Narayanan. Shahrukh Khan plays himself, and quietly takes over the movie as its anchor point and narrator. He occupies the frame and commands attention, looking every bit the superstar he is - but we reiterate, this film is all about Narayanan.

Rocketry is a fantastic story, but not necessarily a fantastic film. It's still worth a watch - and on the big screen if you are a fan of R Madhavan.
Share. Save. Connect.
Tweet
ROCKETRY (TELUGU) SNAPSHOT 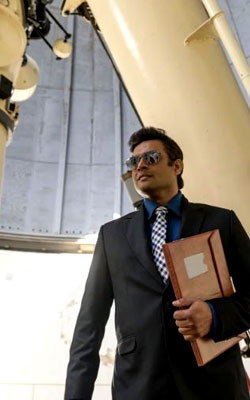 ADVERTISEMENT
This page was tagged for
Rocketry (Telugu) telugu movie
Rocketry (Telugu) reviews
release date
R Madhavan, Simran
theatres list
Follow @fullhyderabad
Follow fullhyd.com on
About Hyderabad
The Hyderabad Community
Improve fullhyd.com
More
Our Other Local Guides
Our other sites
© Copyright 1999-2009 LRR Technologies (Hyderabad), Pvt Ltd. All rights reserved. fullhyd, fullhyderabad, Welcome To The Neighbourhood are trademarks of LRR Technologies (Hyderabad) Pvt Ltd. The textual, graphic, audio and audiovisual material in this site is protected by copyright law. You may not copy, distribute, or use this material except as necessary for your personal, non-commercial use. Any trademarks are the properties of their respective owners. More on Hyderabad, India. Jobs in Hyderabad.