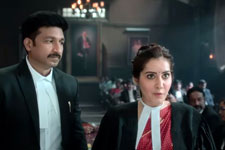 Sai Tulasi Neppali / fullhyd.com
EDITOR RATING
6.5
Performances
Script
Music/Soundtrack
Visuals
7.0
7.0
7.5
7.5
Suggestions
Can watch again
No
Good for kids
No
Good for dates
Yes
Wait for OTT
Yes
Lawyer Lucky loves money. Loves it in all its bedazzling forms - as sacks of cold hard cash, as Fortuner cars, as villas. Whatever egregious crime his clients may be on trial for, Lucky finds a way to get them acquitted, as long as they pay him a big, fat fee. He is, as he likes to repeat often, pakka commercial.

Writer and director Maruthi seems to be winking at us from beyond the screen because he uses "Pakka Commercial" as a double entendre. On the one hand, the title is suggestive of Lucky's mercenary character. And on the other hand, there's the nature of the movie itself. Maruthi seems to be addressing the fervent backlash to mass Telugu movies - that they are run-of-the-mill commercial affairs with too much vacuous singing and dancing, and too many outlandish fight scenes. Maruthi seems to ask, so what? And dials it up all the way.

By breaking the fourth wall and directly addressing the audience, Maruthi's characters warn you of an impending fight, or dance number. They goad you to give the film a good review and make it a box-office success. This brand of self-awareness in a movie can be grating, but it mostly makes you giggle. And if such explicit indulgence isn't to your liking, well, too bad for you, you sourpuss, Maruthi seems to say.

Lucky, played by Tottempudi Gopichand, is the anti-hero of the story. Well into the second half of the movie, he displays no redeeming qualities. For a top lawyer, he doesn't even seem to have the gift of the gab, instead using dubious tactics like witness-tampering and fake evidence to win his cases. He strikes a deal with the Devil and begins working for a sleazy industrialist Vivek (Rao Ramesh), and gets him off on multiple murder counts. From the sidelines, Lucky's father Satyanarayana Murthy (Satyaraj), an ex-judge, an honest and upright man to a fault, watches in dismay as his son devolves into a money-grubbing suit.

Whether our anti-hero finally becomes the good man that we know he is deep-down, is revealed in the climax. In other words, does Maruthi stick to the commercial script or tear it up - that's the subliminal mystery in the movie that is divested only in the very last scene.

Much of Pakka Commercial's story is told through a series of courtroom proceedings, each one a bigger travesty than the last. Any real lawyer in the audience will squirm in their seat when a judge asks the witnesses to prove they were at a satsang (not at the crime scene) by asking them to sing Sai Baba bhajans. In other ridiculous twists, Lucky turns against his own clients mid-argument, gets his opposing lawyer to take the stand, and strips him of his title.

One reason such globs of nonsense go down easy is the presence of the superbly-written character of Lawyer Jhansi (Raashi Khanna) - a TV serial actor who's played a lawyer in the serial but who's turned a real-life lawyer as well. Donning an oddball combo of traditional sari and a pair of John Lennon sunglasses, Jhansi oozes swag as she struts around the courtroom like a peacock, giving selfies to fans, trying to sue her producers for "murdering" her character in the TV serial.

Jhansi, as the shallow celebrity with a flair for the dramatic, is the perfect vehicle for Maruthi's self-aware style of story-telling. In a fight scene that she orchestrates, she brings in junior artistes from an action movie set to beat up Lucky. But before Lucky can land a punch on them, they fall to the ground in faux agony - just as in those big-budget Rajnikanth movies where a single man beats up an entire army of goondas. The gag is original and hysterical.

Gopichand is in tip-top shape to play the semi-action hero role of Lucky. Although known for playing gritty, serious roles, he seems to be able to let loose in scenes that call for physical comedy. However, his signature flat voice lacks the sparkle to carry long dialogues. Raashi Khanna, whose voice dubbing is on point, nails her role as Jhansi. Her comedic timing is so impeccable that even surrounded by certified comedians like Harsha Chemudu she is the one that brings home the laughs.

As the real villain of the movie Rao Ramesh is so convincing as the corrupt and depraved industrialist that it's hard not to cringe every time he enters the frame, in anticipation of his lascivious behaviour. He is truly a master of voice modulation. Even when sharing screen space with the decorated actor Satyaraj who plays Lucky's long-suffering father with an irksome dullness, Rao steals the scenes.

What would a mass-market movie be without some solid beats? Music director Jakes Bejoy gives us not one but four thumping dance numbers, each choreographed in a playfully unique style. One memorable song is a dream sequence where Jhansi and Lucky argue and dance their way around a courtroom decked up in snow and clouds as if it were from Narnia.

On a final note, if you are expecting this courtroom drama movie to have any eloquent arguments and opening statements - the kind you've seen on A Few Good Men or Lincoln Lawyer - just don't watch it. True to its title till the very end, the movie is loaded with masala, a healthy dose of humour, and a gaggle of eccentric characters
Share. Save. Connect.
Tweet
PAKKA COMMERCIAL SNAPSHOT 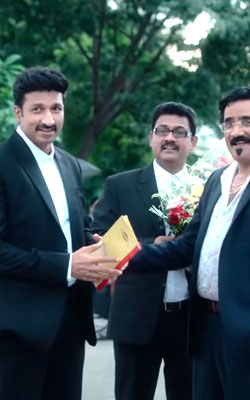 See Pakka Commercial full details
PAKKA COMMERCIAL USER REVIEWS
1 - 1 OF 1 COMMENTS
POSITIVE  |  NEGATIVE |  NEWEST  |  OLDEST  |  MOST HELPFUL  |  LEAST HELPFUL
Vara on 4th Jul 2022, 11:44am | Permalink
"Any real lawyer in the audience will squirm in their seat when a judge asks the witnesses to prove they were at a satsang" na na we have seen worst than that. In a court ruling, judge ruled in favor of a CM of state by miss calculating a zero.

ADVERTISEMENT
This page was tagged for
Pakka Commercial telugu movie
Pakka Commercial reviews
release date
Tottempudi Gopichand, Raashi Khanna
theatres list
Follow @fullhyderabad
Follow fullhyd.com on
About Hyderabad
The Hyderabad Community
Improve fullhyd.com
More
Our Other Local Guides
Our other sites
© Copyright 1999-2009 LRR Technologies (Hyderabad), Pvt Ltd. All rights reserved. fullhyd, fullhyderabad, Welcome To The Neighbourhood are trademarks of LRR Technologies (Hyderabad) Pvt Ltd. The textual, graphic, audio and audiovisual material in this site is protected by copyright law. You may not copy, distribute, or use this material except as necessary for your personal, non-commercial use. Any trademarks are the properties of their respective owners. More on Hyderabad, India. Jobs in Hyderabad.