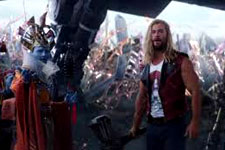 Punarvasu Pendse / fullhyd.com
EDITOR RATING
7.0
Performances
Script
Music/Soundtrack
Visuals
7.0
6.0
9.0
9.0
Suggestions
Can watch again
Yes
Good for kids
Yes
Good for dates
Yes
Wait for OTT
No
If Thor: Ragnarok was a complete shake-up of the literally-a-god phenomenon that Marvel had previously employed in Thor and Thor: The Dark World, Thor: Love And Thunder goes into overdrive as it completely dismantles any trace of the serious, brooding superhero.

Taika Waititi is back at the helm with his wondrous childlike sensibilities and a penchant for the subversive and the colourful (he ironically subverts the colourful by having an entire sequence in just black and white) after the much acclaimed Thor: Ragnarok. Waititi continues to be in his element in this latest installment, and has even written the script himself along with Jennifer Kaytin Robinson.

Thor (Chris Hemsworth) is out in space adventuring with the Guardians Of The Galaxy, and supposedly having a fantastic time at it. While the god of thunder is still struggling with finding a purpose after the fall of Asgard and defeat of Thanos, Sif (Jaimie Alexander) sends a distress message warning Thor about Gorr the God Butcher (Christian Bale). Gorr has a vendetta against all gods, and is particularly in search of Thor.

Meanwhile on New Asgard, Jane Foster (Natalie Portman) has taken up the mantle of the Mighty Thor after Thor's ex-weapon, the hammer Mjollnir, has deemed her to be worthy. After finding that the other gods are going to be of little help due to the influence of Zeus (Russell Crowe), the two Thors must face Gorr, with only Valkyrie (Tessa Thompson) and Korg (Taika Waititi) to help them.

Thor: Love And Thunder is a movie that is extremely earnest in being irreverent. At just under two hours, it is one of the shortest MCU movies that we can recall in recent history, and its frenetic pacing means there is never a dull moment. So much so, in fact, that it becomes quite chaotic, and the juxtaposition of serious scenes with the constant jokes can feel quite jarring. Thor: Ragnarok had its share of gags, but Love And Thunder is constantly trying to be funny - often at the expense of its identity. It settles down by the second half and finishes off with a beautiful third act, but the damage is done by that point, and the legions of casual watchers that enjoy Marvel movies might feel put off by all these tonal shifts.

As for the hardcore Marvel Cinematic Universe fans, there is so much information thrown at you! The number of references this movie has, from both within the MCU and from pop culture as a whole, is astounding. While there will be no dearth of fan forums discussing the Marvel references, we'd like to point out the cool pop culture ones we noticed. For starters, New Asgard is a theme park, a subtle dig at Martin Scorsese who called MCU movies theme park rides. Then there's Enya's Only Time playing while Thor does a split that is a nod to the epic split performed by Jean-Claude Van Damme for Volvo, and Valkyrie is doing a literal Old Spice commercial.

The musical association too continues, with Heimdall's son Astrid calling himself Axl in a film that features several songs from Guns N' Roses. Korg confuses Jane Foster for Jane Fonda first, and then Jodie Foster, and Russell Crowe parodies his own outfit from Gladiator with a bouncy skirt and a funny accent. Oh, and we also see children in cages - not every reference is amusing or quirky.

Thor: Love And Thunder is a fun film, but it isn't at the same level as its prequel. While Ragnarok had its lighter moments in between an overarching plot, Love And Thunder feels like a collection of short stories more than an unputdownable novel. It is entertaining enough, but ultimately it feels like a movie that is lesser than the sum of its otherwise excellent parts.

Marvel movies have always been more about the spectacle and the starpower than the script, and Love And Thunder brings out the big guns. Chris Hemsworth has completely dropped the brooding act from the first two Thor films, and is equal parts heroic and goofy. He has an assured confidence that stems from the fact that people are going to come to watch him, and he's not wrong. Natalie Portman, however, cannot let go of her more serious version of Jane Foster - and despite her chemistry with Hemsworth, she fails to feel at home in the silly shenanigans that Thor, Valkyrie, and Korg get into.

Tessa Thompson's Valkyrie is honoured by the title of king bestowed upon her, but she is dying to get out into a scrap, and Thompson has a lot of fun once her character is allowed to. Taika Waititi charms as the kiwi-accented, quick-talking Korg who is now some sort of a narrator as well. Christian Bale's portrayal of the unhinged Gorr is menacing, but the character feels lacking.

The extended cast is great, as you would expect, but most of them are just cameos. Russell Crowe has an amusing bit as Zeus, but the character feels like a frivolous addition. Chris Pratt has exactly one good line, and the rest of the Guardians feel unused, so do other recurring characters such as Darcy Lewis (Kat Dennings) and Erik Selvig (Stellan Skarsgard).

I can't remember the last time a film's music was this good. Michael Giacchino and Nami Melumad's score is thumping and effective - only let down by ringing occasional loudness. We are treated to multiple genres of music including heavy metal (Rainbow In The Dark by Dio), rock (multiple songs by Guns N' Roses including Welcome To The Jungle, Paradise City, Sweet Child O' Mine and November Rain), pop (Our Last Summer by ABBA) and hip hop (Family Affair by Mary J Blige). Waititi wanted the feeling of being out for a wild ride, especially referenced by Guns N' Roses which happens to be his favourite band.

Thor: Love And Thunder is a Marvel movie, which means that most people have already made up their mind on watching it. It is a solidly entertaining, albeit disjointed-feeling movie, and it continues the trend of giving directors in the MCU a chance to present their own take on largely formulaic source material. And while not to the extent of Thor: Ragnarok, it still works.
Share. Save. Connect.
Tweet
THOR: LOVE AND THUNDER... SNAPSHOT
THOR: LOVE AND THUNDER (TELUGU) SNAPSHOT 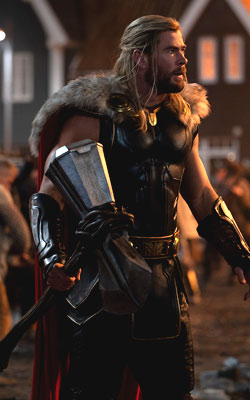 ADVERTISEMENT
This page was tagged for
Thor: Love and Thunder (Telugu) telugu movie
Thor: Love and Thunder (Telugu) reviews
release date
Chris Hemsworth, Natalie Portman
theatres list
Follow @fullhyderabad
Follow fullhyd.com on
About Hyderabad
The Hyderabad Community
Improve fullhyd.com
More
Our Other Local Guides
Our other sites
© Copyright 1999-2009 LRR Technologies (Hyderabad), Pvt Ltd. All rights reserved. fullhyd, fullhyderabad, Welcome To The Neighbourhood are trademarks of LRR Technologies (Hyderabad) Pvt Ltd. The textual, graphic, audio and audiovisual material in this site is protected by copyright law. You may not copy, distribute, or use this material except as necessary for your personal, non-commercial use. Any trademarks are the properties of their respective owners. More on Hyderabad, India. Jobs in Hyderabad.