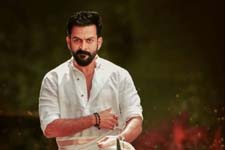 Aditya Devulapally / fullhyd.com
EDITOR RATING
2.0
Performances
Script
Music/Soundtrack
Visuals
2.0
1.0
7.0
1.0
Suggestions
Can watch again
No
Good for kids
No
Good for dates
No
Wait for OTT
No
It is the '90s, and Kuriyachan (Prithviraj Sukumaran), famously known as Kaduva (Tiger), is a low-key godfather in the quaint town of Pala, Kerala. When an ego tussle arises with Oesiputty (Vivek Oberoi), the IG of the district, Kuriyachan has to choose between his family and his ego.

Prithviraj became a star in Malayalam mirroring Mohanlal's work. The way he twirls his moustache or calls his wife resembles the former a lot. But unlike his tiger ring or his perfectly ironed white clothes, he never shines enough in this film. Because the film wants to make an extra effort at travelling back in time. Hero, villian, dishoom-dishoom, villain wins, hero loses, then hero wins, villain loses. The same template we have seen since the ages of our grandfathers.

Now you might ask: doesn't every hero-villain confrontation follow the same formula? Yes, but doesn't the depth of a confrontation also matter? When you watch a film like Ayyapanum Koshiyum, featuring the same Prithviraj Sukumaran at his finest, you finish the experience feeling blown over by that display of profound character depth. Who was the hero and who was the villain in that film?

Kuriyacham is shown as an epic provider of justice, but at times, as just the mortal heir of a wealthy rubber planter who gets caught in a messy confrontation. If humanising him was required then why go to the lengths of elevating him into a god in his intro? It felt like the makers occasionally reminded themselves, "Hey, let's not forget, this is a Malayalam movie!"

In all of this mud, the diamond that catches your attention is Jakes Bejoy. The musician becomes a pillar for this clumsy boredom of 3 hours. The film with Bejoy's music stripped off becomes a '90s television serial.

The question isn't whether you should watch the film. It is, do you like sitting in an air-conditioned hall for 3 hours staring at your phone.
Share. Save. Connect.
Tweet
KADUVA SNAPSHOT 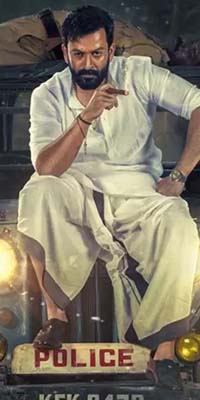 ADVERTISEMENT
This page was tagged for
Kaduva telugu movie
Kaduva reviews
release date
Prithviraj Sukumaran, Vivek Oberoi
theatres list
Follow @fullhyderabad
Follow fullhyd.com on
About Hyderabad
The Hyderabad Community
Improve fullhyd.com
More
Our Other Local Guides
Our other sites
© Copyright 1999-2009 LRR Technologies (Hyderabad), Pvt Ltd. All rights reserved. fullhyd, fullhyderabad, Welcome To The Neighbourhood are trademarks of LRR Technologies (Hyderabad) Pvt Ltd. The textual, graphic, audio and audiovisual material in this site is protected by copyright law. You may not copy, distribute, or use this material except as necessary for your personal, non-commercial use. Any trademarks are the properties of their respective owners. More on Hyderabad, India. Jobs in Hyderabad.