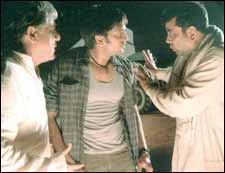 Yet the rustic characters, their crude, idiomatic talk, just their perfectly dirty clothes and langotis, the way they sit on their haunches and feed leaves to their goats – all that imagery keeps you hooked for a while. You can almost smell the unwashed sweat mixed with the scent of cow-dung covered courtyards. Which is an odd digression in a comedy movie. Which is why I say MW is bizarre. Crazy. Kooky!

The point is while Priyadarshan got the costume design and accents right, this isn’t a costume drama. It’s a situational comedy revolving around the oldest comic-theme in Bollywood. Men after money.

Jaane Bhi Do Yaaron, Maalamaal and Hera Pheri met their impeccable success with it, but MW tries to mash them all together and gives you an unbearably long-drawn and substandard village nautanki. It’s droll at its best and will bore you to jitters at its worst. And through it all, the village characters will dance irrelevantly around you mouthing boorish dialogues like in a disconnected dream.

The story goes that Lilaram (Paresh Rawal) is a lottery seller in the village of Laholi in UP. Balwant (Om Puri) has a daughter Sukhmani (Reema Sen) who is in love with Kanhaiya (Ritesh Deshmukh), but Ballu won’t let them marry ‘cause Kanhaiya is not exactly well to do. The Thakurayan (Sudha Chandran) of the village has a bratty brother Baje (Rajpal Yadav) who is out to get Sukhmani for himself too.

When Anthony (Innocent), the village drunkard, wins a lottery of 1 crore, Lilaram begins a quest of somehow getting the lottery ticket back from him before he finds out. Anthony kicks the bucket, and between a few Jaane Bhi Do Yaaron reminiscent scenes of transporting a dead body around while making it seem alive, the entire village finds out Lilaram’s plot one by one and each one wants his share too. So begins an insane rush to grab every penny possible as the number of suitors for the treasure multiplies geometrically with every new dawn.

Towards the end, there is a cloying epiphany, as the villagers sit huddled together berating themselves for having behaved like such animals. It’s obvious that by now Priyadarshan has run out of ideas and has fallen by the trackside into predictability and moralizing. The script paints itself into a corner, and it’s like the closer it gets to that corner, the faster it paints in a show of screwed-up strategy.

Maalamaal Weekly is ultimately an unfortunate waste of costume and set planning, and so many brilliant actors. It makes you feel that Priyadarshan needn’t have taken the trouble. A comedy is much simpler ‘cause its trigger is purely cerebral. More authentic characters or a snake-pit of a plot isn’t going to make anyone laugh harder. Just a genuinely funnier joke instead of the labyrinthine chases would have had the audience in raptures.

Even as the idea is to shock with Lilaram’s audacious and chronically ill-fated schemes, the tale only knots itself up further until it becomes as ungrounded as a fluffy cloud wandering in the summertime sky. And if his senseless shenanigans are supposed to make you laugh, all they really seem is senseless.

All in all, another brick from the same old kiln. Another movie you can’t stay awake through out. Another bunch of jokes as old as the Bible. And another bunch of decent actors turning somersaults trying to break out of a crappy script. Ditch it.
Share. Save. Connect.
Tweet
MALAMAAL WEEKLY SNAPSHOT

ADVERTISEMENT
This page was tagged for
Malamaal Weekly hindi movie
Malamaal Weekly reviews
release date
Paresh Rawal, Om Puri
theatres list
Follow @fullhyderabad
Follow fullhyd.com on
About Hyderabad
The Hyderabad Community
Improve fullhyd.com
More
Our Other Local Guides
Our other sites
© Copyright 1999-2009 LRR Technologies (Hyderabad), Pvt Ltd. All rights reserved. fullhyd, fullhyderabad, Welcome To The Neighbourhood are trademarks of LRR Technologies (Hyderabad) Pvt Ltd. The textual, graphic, audio and audiovisual material in this site is protected by copyright law. You may not copy, distribute, or use this material except as necessary for your personal, non-commercial use. Any trademarks are the properties of their respective owners. More on Hyderabad, India. Jobs in Hyderabad.