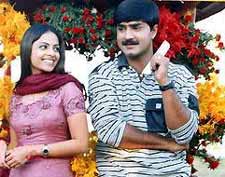 Ajay Bhashyam / fullhyd.com
EDITOR RATING
6.0
Performances
Script
Music/Soundtrack
Visuals
NA
NA
NA
NA
Suggestions
Can watch again
NA
Good for kids
NA
Good for dates
NA
Wait to rent it
NA
They don't kid around about the make-believe thing. Where else would you have a very ordinary looking and none-too-accomplished guy being sought after by two damsels? I mean, we guys have all been at it some time or the other, and we know, right? This dude's problems are quite the opposite - he has to spend half a film trying to shake off a Soundarya. Where are these problems when you need them?

Right from the name (ouch!), everything about Naa Manasista... Raa! is filmy. It's an old problem - the story starts off pretty okay and has enough steam to carry it till the interval, then there is the twist (which is, as is the norm, unraveled most ridiculously) and then the writer keeps coming up with new problems just to pull along the film for the second half.

Shankar (Srikanth) is a tenant in the house of one Prakash. Prakash's half-sister Nandini (Soundarya), who is a medical student, hates him while he pines to be accepted by her as a brother. Nandini and Shankar are great friends, and one day, when dropping her at the bus stop, he happens to see the unbelievably cute Seershika (Richa). It's love at first sight for both, but as usual it's all just aankhon-hi-aankhon-mein. Fun and games (and two imaginary songs) follow and they don't even know each other's names.

About an hour (movie-time) later, Shankar's highly rude and abusive father (Kota) lands in Hyderabad for his wife's heart operation and tells Shankar that his marriage is being arranged. Same scene in Seershika's house. And guess what? They are the two people about to be married. Of course, they don't realize this, and as expected, both avoid the meeting. It would have been a really short movie otherwise!

Some misunderstanding then occurs with the result that, to pacify his ailing mother until her operation, Shankar says that he'll marry Nandini. Further misunderstandings in his real love life occur due to this arrangement and he asks Nandini to tell the truth. The arrangement was her idea actually. She does an about turn and says that she really loves him. The film is enlivened by Soundarya's psychopathic obsession after this twist, leading up to a fairly engrossing climax.

I was never too impressed with Srikanth as an actor and remain so. Seeing him and Soundarya together (Kalisi Naduddam, in recent memory) has become sort of a routine. Soundarya looks overweight but is brilliant in the second half. She's very convincing as the obsessed female - a rarity these days!

Richa has hardly anything to do except smile (oh, so enchantingly!) and cry towards the end. Not more than ten lines in all. The support cast is okay; especially the comedy track with Brahmanandam, Sudhakar, etc. The extra half in the rating is for Richa and for Soundarya, who carries the second half on her own.

The music is no great shakes. There are about a million discrepancies in this film extensively shot in Hyderabad (Necklace Road, in particular) and in Switzerland (the songs). Lots of loose odds and ends in the story. Strictly for timepass or for Richa fans.
Share. Save. Connect.
Tweet
NAA MANASISTHA RAA SNAPSHOT

ADVERTISEMENT
This page was tagged for
na manasisthara
kalisi naduddam naa songs
naa manasista raa movie wikipedia
Naa manasisthara jeevi review
naa manasista raa movie naa songs
Follow @fullhyderabad
Follow fullhyd.com on
About Hyderabad
The Hyderabad Community
Improve fullhyd.com
More
Our Other Local Guides
Our other sites
© Copyright 1999-2009 LRR Technologies (Hyderabad), Pvt Ltd. All rights reserved. fullhyd, fullhyderabad, Welcome To The Neighbourhood are trademarks of LRR Technologies (Hyderabad) Pvt Ltd. The textual, graphic, audio and audiovisual material in this site is protected by copyright law. You may not copy, distribute, or use this material except as necessary for your personal, non-commercial use. Any trademarks are the properties of their respective owners. More on Hyderabad, India. Jobs in Hyderabad.