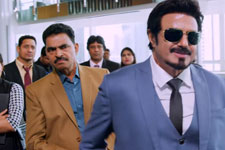 He is Balakrishna (cue to screams of "Jai Balayya" now), the equivalent of all the original Avengers combined, and the man who has dedicated himself to saving the lives of everyone - except the audiences.

There is something about Balakrishna's movies of late that beckons your amusement. You have too many spots where you just want to blurt out in laughter, but you don't do it because whatever you find funny wasn't intended to be funny. And whatever was intended to be funny never manages to tickle your funny bone. It feels like our dear Balayya has created some kind of an image of himself inside his head (a saviour of the underprivileged from a bad guy) and decides to do the same role over and over. Either you have two Balayyas (one of them will die), or only one Balayya who is driven to a near-death situation after which he returns with a new wig.

In case of Ruler, it's the latter. Sarojini Naidu (Jayasudha) saves Dharma (Balakrishna), who is driven to a near-death situation. She adopts him and names him after her dead son, Arjun Prasad. Balakrishna doesn't feel bad about the name change because he has memory loss now. Sarojini makes him the chairman of her company, and you have the "Balakrishna becomes Nandamuri Tony Stark" transformation.

Anyway, you are soon introduced to a UP Project File, that leads you to Dharma, the Balakrishna before he was Nandamuri Tony Stark. What follow are things you've seen countless times and countless reasons for you to stop watching Balakrishna movies.

Ruler feels like Balakrishna and his directors now make movies to offend our sensibilities. While logic was never really Balakrishna's forte, some of his larger than life performances endeared him to many people. His performances recently have however been nothing but stale. And the wigs he uses are worse than the stories he selects - there is a scene in the flashback where the goons are bashing him up, and you half-suspect it must be because they are pissed off by his wig. Whatever it is, this is not a performance anyone is going to remember.

What is Sonal Chauhan up to these days - apart from suddenly showing up in a Balakrishna movie, dancing in a couple of songs, falling in love with whichever character Balakrishna plays, and then silently disappearing because she understands how inconsequential her character is, that is? Vedhika too has such a shallow character - she asks Dharma if her figure is okay, and tells him that if he feels any part in her body is not in the right proportion, she is going to get plastic surgery done. Please kill us already.

The rest of the characters - Bhumika, Prakash Raj and others - look like they have taken up the "try not to laugh while shooting scenes" challenge, and really have nothing much to do except for being saved by Balayya.

The only good thing about the movie is Balakrishna dancing, even if you can't help but laugh at it. Kudos to the man for at least attempting to do so at his age. If only he put that kind of diligence into selecting scripts as well.
Share. Save. Connect.
Tweet
RULER SNAPSHOT 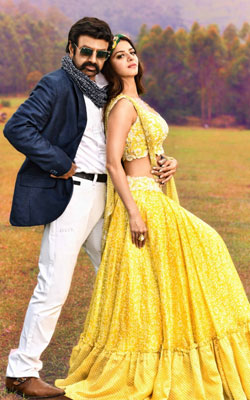 ADVERTISEMENT
This page was tagged for
Ruler telugu movie
Ruler reviews
release date
Balakrishna, Sonal Chauhan
theatres list
Follow @fullhyderabad
Follow fullhyd.com on
About Hyderabad
The Hyderabad Community
Improve fullhyd.com
More
Our Other Local Guides
Our other sites
© Copyright 1999-2009 LRR Technologies (Hyderabad), Pvt Ltd. All rights reserved. fullhyd, fullhyderabad, Welcome To The Neighbourhood are trademarks of LRR Technologies (Hyderabad) Pvt Ltd. The textual, graphic, audio and audiovisual material in this site is protected by copyright law. You may not copy, distribute, or use this material except as necessary for your personal, non-commercial use. Any trademarks are the properties of their respective owners. More on Hyderabad, India. Jobs in Hyderabad.