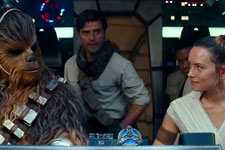 Punarvasu Pendse / fullhyd.com
EDITOR RATING
7.5
Performances
Script
Music/Soundtrack
Visuals
8.0
6.0
10.0
10.0
Suggestions
Can watch again
Yes
Good for kids
Yes
Good for dates
Yes
Wait to rent it
No
All good things come to an end - and that also includes the space opera that captured the imagination of generations of movie-goers.

We went through a lot to get here. The Star Wars franchise always courted controversy due to its disconcertingly loyal fanbase, but the sequel trilogy has been in the limelight more for its offscreen drama than anything in the actual movies: The fan backlash against Rian Johnson's The Last Jedi, the accusations that Disney ruined the Star Wars franchise (news flash - it had already been ruined by Lucas himself with the prequel trilogy), and the hard fact that baby Yoda's cuteness from the Mandalorian eclipsed the hype of the actual movies themselves.

But first, the tale. The Resistance is alarmed by the existence of The Final Order, a dark force assembled by a known Sith emperor that has put together the largest fleet ever seen in the universe. So, Rey (Daisy Ridley) and co embark on a new adventure to uncover a relic known as a Sith Wayfinder, the only link to the location of Darth Sidious. With Kylo Ren (Adam Driver) hot on their heels, Rey, Finn (John Boyega) and Poe (Oscar Isaac) dive into danger one final time, with everything on the line this time.

Director J J Abrams, who played it safe with The Force Awakens, is back at the helm, trying to placate that vociferous part of the fanbase that did not approve of Johnson's attempt to experiment with the franchise. This means we get a movie that Disney tries to appease everyone with - the people who despised the Last Jedi, the people who fell in love with the Last Jedi, the critics, the ride-or-die Star Wars veteran fans, and the weird corner of the Internet (yes, you, ReyLo shippers).

The end result is a film that returns to the familiar Star Wars formula, where you feel at home - with its long list of returning actors' cameos, its unsubtle nods to George Lucas' genius, and none of the intrigue that so defined its predecessor.

Don't get us wrong, The Rise Of Skywalker is stellar entertainment. Abrams is a master of engineering spectacles, and that coupled with some superb cinematography and grandiose set-pieces means that the newest Star Wars film is a treat on the eyes (they even managed to make a 3D film not look perpetually dark!). Plenty of throwbacks, tons of references, and action-packed revisitations of iconic locations give long time fans much to get nostalgic about.

The script brings back many beloved characters - you have get extended cameos, guest appearances, and even several voices from the overreaching Star Wars universe. Leia Organa (Carrie Fisher) gets the send-off she deserves, and Luke and Han serve as guides for the two major characters. The Millenium Falcon is piloted by Lando Calrissian (Billy Dee Williams) again. We'd wager that more than a few tears were shed by the collective audience.

But beneath all the gloss, The Rise Of Skywalker struggles with identity. The lack of time given to character building, the various plots and counterplots which cause said lack to occur, the high amount of exposition that comes with the task of reintroducing old favourites to a new audience - all of these lead to a film that is at odds with itself.

The performances are superb. This is easily Daisy Ridley's best performance in the Star Wars franchise yet - Rey is the finally the focal point that the series intended her to be. If we had a complaint, it would be that her arc feels accelerated, with Rey ending up more powerful than many canonical favourites despite undergoing significantly less training. Take nothing away from Ridley, though - she is out and out the lead character here.

Adam Driver is fantastic as Ben Solo/Kylo Ren, the yang to Rey's yin, although the Abrams script doesn't allow for the more complex interpretation of Kylo Ren in The Last Jedi.

Carrie Fisher is going to be missed. The film pays a fitting tribute to the last of the original Skywalkers, the final scene of the movie cementing her position in the revered family, a guiding light to the Jedi. Mark Hamill is back with a small but important part, as motivator-in-chief, and Harrison Ford joins him in doing the same. The presence of these veterans is always welcome, and never ceases to bring joy to the legions of Star Wars fans out there.

John Boyega isn't given the trademark humour his character Finn brings to the equation this time around. Finn, however, plays a more pivotal role in the proceedings - something Boyega enthusiastically tackles. The same can be said of Oscar Isaac - the pigheaded pilot Poe is acting commander at one point, but his character has moments of levity fueled by his interactions with past flame Zorii Bliss.

Dan Mindel's cinematography perfectly complements the special effects that the Star Wars verse so liberally uses. By liberally, we mean perfectly on point, as both CGI and practical effects combine to give us a brand new look at the universe which continues to dazzle fervent admirers and complete newcomers alike, over four decades later.

What can we say about John Williams' music that hasn't been said before? The iconic soundtrack has been stuck in the heads of millions, and we are no exceptions. Hell, the title track is looping on background as this review is being written. Williams had previously stated that this movie was going to be his final bow in the Star Wars universe, which makes us treasure this one all the more.

So is The Rise Of Skywalker a great film on its own? Probably not.

Is it worth watching? Absolutely.

Indeed, The Rise Of Skywalker is almost the perfect finale to cap off the phenomenon that is Star Wars, at least for now. This was a series made for film, not an adaptation of any existing material, and bringing to life now beloved characters for three generations of wide-eyed fans. If you're someone remotely invested in the Star Wars universe, you owe it to yourself to bid farewell to this magnificent space opera. And by God, it will be an emotional farewell.
Share. Save. Connect.
Tweet
STAR WARS: THE RISE... SNAPSHOT
STAR WARS: THE RISE OF SKYWALKER SNAPSHOT 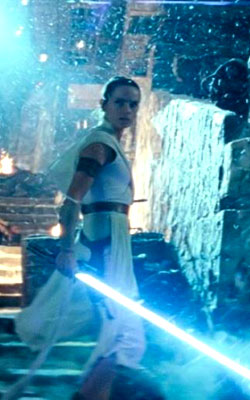 ADVERTISEMENT
This page was tagged for
Star Wars: The Rise Of Skywalker english movie
Star Wars: The Rise Of Skywalker reviews
release date
Carrie Fisher, Mark Hamill
theatres list
Follow @fullhyderabad
Follow fullhyd.com on
About Hyderabad
The Hyderabad Community
Improve fullhyd.com
More
Our Other Local Guides
Our other sites
© Copyright 1999-2009 LRR Technologies (Hyderabad), Pvt Ltd. All rights reserved. fullhyd, fullhyderabad, Welcome To The Neighbourhood are trademarks of LRR Technologies (Hyderabad) Pvt Ltd. The textual, graphic, audio and audiovisual material in this site is protected by copyright law. You may not copy, distribute, or use this material except as necessary for your personal, non-commercial use. Any trademarks are the properties of their respective owners. More on Hyderabad, India. Jobs in Hyderabad.