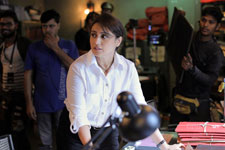 Punarvasu Pendse / fullhyd.com
EDITOR RATING
6.0
Performances
Script
Music/Soundtrack
Visuals
6.0
6.0
4.0
5.0
Suggestions
Can watch again
No
Good for kids
No
Good for dates
No
Wait for OTT
Yes
A crisply edited film that runs just over a hundred minutes is not the kind of fare we generally expect from Bollywood. Mardaani 2 gets rids of a lot of filmmaking clutter as it rushes towards the end credits, and we here at fullhyd.com don't want to lag behind either.

Shivani Roy (Rani Mukherjee) is back, this time posted away from Mumbai, put in charge of the city of Kota, Rajasthan. This time around, she is on the trail of a violent rapist and murderer, who is shown to feel no remorse or regret. Political backing, and a twisted interest in being famous, have this monster of a man trying to both one-up and impress Roy whose public condemnation of his heinous acts makes her the number one target of his misogynistic rage.

This is a film that should come with a trigger warning, given it has some pretty graphic scenes of brutality. The movie grabs your attention very quickly with some sequences that make you recoil, drawing audible gasps from the audience within the first few minutes - its opening credits roll during a scene in which a woman is abducted and sexually assaulted.

Indeed, writer-director Gopi Puthran stomps upon the sensitivities of his viewers, purposefully, to showcase the discomfort that women regularly face in this country. The antagonist is also regularly made to break the fourth wall, making his character even creepier.

However, much of all that adds nothing that would make the viewer think. The tension in the beginning, too, unfortunately, does not last for the entirety of the movie. Mardaani 2's script falls into the trap of dramatising its message, despite having the right intentions. For all her tough-tackling demeanour, Mukherji's Shivani Roy has to resort to sermonising on television her responses to what is essentially bait masquerading as tough questions.

Roy is also meant to be the one shining light in a bumbling police department, her laconism and honesty cutting through the bullshit that is thrown at her. Despite this setup, however, the criminal seems to always be two steps ahead of her, and every encounter between them looks like it was on his terms.

Mardaani 2, its problematic title notwithstanding, essentially boils down to the differences between men and women, with the worrying view of singularly giving the audience an antagonist to hate rather than the larger, institutional issues that lie beneath it all. Bollywood is rarely interested in delving into the complexities of sensitive topics, something we mentioned when we reviewed Section 375, and Mardaani 2, despite its initial promise, goes down the same road. 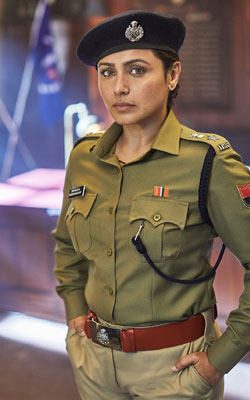 ADVERTISEMENT
This page was tagged for
mardaani 2 full movie
mardaani 2 movie full
Mardaani 2 hindi movie
Mardaani 2 reviews
release date
Follow @fullhyderabad
Follow fullhyd.com on
About Hyderabad
The Hyderabad Community
Improve fullhyd.com
More
Our Other Local Guides
Our other sites
© Copyright 1999-2009 LRR Technologies (Hyderabad), Pvt Ltd. All rights reserved. fullhyd, fullhyderabad, Welcome To The Neighbourhood are trademarks of LRR Technologies (Hyderabad) Pvt Ltd. The textual, graphic, audio and audiovisual material in this site is protected by copyright law. You may not copy, distribute, or use this material except as necessary for your personal, non-commercial use. Any trademarks are the properties of their respective owners. More on Hyderabad, India. Jobs in Hyderabad.