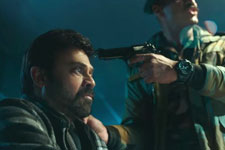 Neema Pramod / fullhyd.com
EDITOR RATING
5.5
Performances
Script
Music/Soundtrack
Visuals
6.0
4.0
5.0
4.0
Suggestions
Can watch again
No
Good for kids
No
Good for dates
Yes
Wait for OTT
Yes
It is when films like Manam and Venky Mama come along that you remember how almost every working male actor in Telugu cinema is related to each other in some way or the other. (Our working female actors on the other hand are from everywhere in the country except for the Telugu-speaking states, but that is another debate for another day.) The point here is, when so many of these actors are related to each other, merely casting some of them together is enough to guarantee a good opening day collection. And our directors seem to be well aware of it, too, if the recent trend of having real-life couples / siblings / father-son pairs / uncle-nephew pairs play their reel-life counterparts is anything to go by.

But casting can only take you so far - once the charm of watching the real-life relatives on-screen wears off, you start sensing the need for a solid story that justifies their presence in the film. Vikran Kumar managed to find the right balance between the meta-commentary and an intriguing plot in Manam. But Venky Mama - which has the real-life mama-alludu Venkatesh and Naga Chaitanya playing a reel-life version of the same - does not manage to fare nearly as well in this regard.

Venkatarathnam alias Military Naidu (Venkatesh) adopts his sister's son Karthik (Naga Chaitanya) after she and her husband are killed in an unfortunate accident. He abandons his military dreams and devotes his life to caring for Karthik without even getting married - much to the displeasure of his father (Nassar) who sees Karthik as a cause for their misfortune.

The love between Naidu and Karthik only strengthens as Karthik grows up - its strength going so far as to make Karthik throw away a lucrative career in London to stay close to his mama. However, trouble comes in the form of an unlucky horoscope. Is their love powerful enough to alter the alignment of the stars? And where does a corrupt MLA who loves to throw in English words and phrases into every sentence, feature in all this?

Before the film answers these questions, it spends half of its runtime establishing the relationship between the mama and alludu, with some romance thrown into the mixture. While Karthik attempts to set Venky up with the new Hindi teacher in town Meera (Payal Rajput), Venky is busy trying to get Karthik back with his ex-girlfriend Harika (Raashi Khanna), who Karthik had abandoned for his mama sometime back.

The entire first half of the film can be classified as mindless fun. The bromance between the mama and the alludu is endearing despite its saccharine nature, and the romance offers plenty of laughs. Some of the gags come with some double entendre, but thankfully stop short of being too offensive. And whenever they do seem to be crossing the line, Venkatesh manages to smooth them over with his trademark wit and charm.

But the cracks begin to show up when the makers finally get to the actual story. The warm, homely tone of the film is abruptly replaced by the dark, snowy military camp in Kashmir. The narrative suddenly shifts to that of the Indian army and its soldiers, and the tonal change is extremely jarring. Logic is never a strong forte for this film, but its absence is sorely felt with this detour. It is only the presence of Venkatesh that acts a saving grace in these portions.

Venkatesh is, to put it precisely, the best thing about Venky Mama. He has a lark with his part - goofing around, blushing, flirting, dancing, fuming, fighting and tearing up. It is hard to look away when he is on screen, which is what keeps you watching when the movie takes that terribly dull turn in the second half. Naga Chaitanya struggles to match up to his mama. Chaitanya has always struck me as a rather average actor, and when he is juxtaposed up against a greater talent here, his weaknesses as a performer really come to fore.

The heroines are not meant to be more than pretty faces, and both Payal Rajput and Raashi Khanna fit the bill, though you'll wish they had gone easier on the make-up with the former. The other actors like Nassar, Geetha, Rao Ramesh and Prakash Raj are as competent as you would expect them to be, despite not having much to work with.

K S Ravindra succeeds in making a somewhat entertaining movie out of a wafer-thin premise, but cannot hold it together until the end. Thaman's tunes are peppy, but nothing to write home about. The visual effects are tacky in many places, diluting whatever little tension you feel when watching those scenes.

Venky Mama is worth a watch just to see Venkatesh shine like the star he is, his carefree nature in front of the camera hopefully teaching a thing or two to his nephew. The rest of the movie though is quite predictable, and if you choose to walk out after the first half, you are likely to find strong public support.
Share. Save. Connect.
Tweet
VENKY MAMA SNAPSHOT 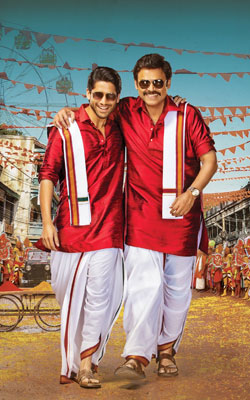 ADVERTISEMENT
This page was tagged for
venky mama movierulz
Venky mama movie rulz HD print
venky mama full move movierulz
venky mama movie on movierulz
movie rules
Follow @fullhyderabad
Follow fullhyd.com on
About Hyderabad
The Hyderabad Community
Improve fullhyd.com
More
Our Other Local Guides
Our other sites
© Copyright 1999-2009 LRR Technologies (Hyderabad), Pvt Ltd. All rights reserved. fullhyd, fullhyderabad, Welcome To The Neighbourhood are trademarks of LRR Technologies (Hyderabad) Pvt Ltd. The textual, graphic, audio and audiovisual material in this site is protected by copyright law. You may not copy, distribute, or use this material except as necessary for your personal, non-commercial use. Any trademarks are the properties of their respective owners. More on Hyderabad, India. Jobs in Hyderabad.