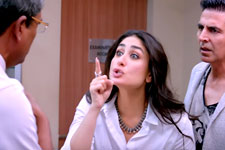 Chaitanya Karthik / fullhyd.com
EDITOR RATING
7.0
Performances
Script
Music/Soundtrack
Visuals
8.0
6.0
5.0
6.0
Suggestions
Can watch again
No
Good for kids
Yes
Good for dates
Yes
Wait to rent it
Yes
Of late, Akshay Kumar has been guilty of making movies that are either patriotic at their core or named Housefull, a movie that is unsure about the number of Ls in its title. Thankfully, this time he chooses to digress from his usual territory and picks ups a subject that is devoid of the seriousness that a patriotic film beckons or the silliness of a Sajid Khan movie.

Good Newwz is about two Batra couples, whose worlds are as far apart as they can be from each other. There are the Batras from Mumbai, Varun (Akshay Kumar) and Deepti (Kareena Kapoor), sophisticated and carrying an air of importance around them, and there are the Batras from Chandigarh, Honey (Diljit) and Monika (Kiara), naïve and often coming across as goofy. Both the couples have been trying to have kids for a few years now, but are not able to conceive naturally. They end up in the fertility clinic of Dr. Joshi (Adil), that promises its customers one thing: Good Newwz!

But when they are bracing themselves to hear that good news, the good is omitted. A sperm mix-up (what Honey calls a spam remix) happens because the person in charge of the process remembers that a Batra sperm must meet a Batra's egg but doesn't care about the who's who. As a result, the couples find themselves in an unusual situation they have no idea how to deal with.

For most part of the movie, the humour stays true to the story, gently aiding it without trying to derail its treading. But there are parts where the humour is crass and it feels that the director is trying a bit too hard to keep the laughs going. There is a scene where Varun smokes weed to escape from all the stress that their predicament has caused him and he is laughing at Moni's expense, who clearly isn't that bright and says "flesh" for "flush", "horrors" for "honours" and "Raat Pasineki" for "Raat Pashmineki". Now you have Varun laughing for about 5 minutes straight here and you can forgive him for being stoned, but you don't want to forgive the director for putting you through it. Scenes like these remind you of that one boy in the gang whose laugh is funnier than his jokes. "Jokes" like these betray the movie they need to elevate. Thankfully, however, the good humour overshadows the bad humour.

Everyone involved in the story plays their part to perfection but Kareena steals the show with ease and elegance. It is her character that lends some kind of credibility and seriousness to a complicated situation majorly used to generate laughter. Given her recent spate of films, it is easy to forget just how amazing an actor she is - there's a poetic grace that she carries around herself. She is the soul of Good Newz, and if there's anything about the movie that moves you, it has to be her portrayal of Deepti.

Akshay Kumar is good in his part as the insensitive husband who just wants to get out of the whole mess and hardly has any emotional strings attached to him. His comic timing is too good and he can sell even the pathetic jokes. Diljit, who plays the loud-mouthed Sardar who acts like a clown, and Kiara, who plays the sweetheart Moni, manage to create an impression despite the looming shadows of Akshay and Kareena. Hopefully they will manage to create their own niches as actors in the future. Adil and Tisca are good in their parts, too.

One of the issues with the film is its stubborn insistence on explaining and simplifying everything. It repeats itself so many times in order to do so, and you can't help but feel that your biology test is due. One objective of the movie must have been to highlight the use of IVF, but the movie unwittingly ends up making that idea preposterous. The screenplay is pretty ordinary and fails to explore the depth and the complexity of the situation.

The music feels like it doesn't belong, and it is especially loud because, well, there are Punjabis in the movie. It is these issues that reduce what could have been Great Newwz to just Good Newwz. Thankfully, the runtime is only 134 minutes - if it were any more, the movie would have to be titled Good Newwzzzz.

Overall, with its light-hearted humour, Good Newwz manages to make for an entertaining watch. However, if you are judicious with your wallet, you should perhaps wait for the movie to be released on Amazon Prime.
Share. Save. Connect.
Tweet
GOOD NEWWZ SNAPSHOT 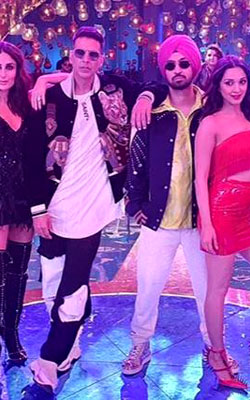 ADVERTISEMENT
This page was tagged for
+is good newz,the hindi movie,good for kids to watch
+reviews of good newz hindi movie
Good Newwz hindi movie
Good Newwz reviews
release date
Follow @fullhyderabad
Follow fullhyd.com on
About Hyderabad
The Hyderabad Community
Improve fullhyd.com
More
Our Other Local Guides
Our other sites
© Copyright 1999-2009 LRR Technologies (Hyderabad), Pvt Ltd. All rights reserved. fullhyd, fullhyderabad, Welcome To The Neighbourhood are trademarks of LRR Technologies (Hyderabad) Pvt Ltd. The textual, graphic, audio and audiovisual material in this site is protected by copyright law. You may not copy, distribute, or use this material except as necessary for your personal, non-commercial use. Any trademarks are the properties of their respective owners. More on Hyderabad, India. Jobs in Hyderabad.