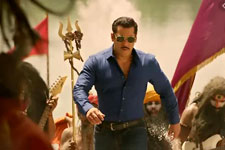 T J Reddy / fullhyd.com
EDITOR RATING
4.0
Performances
Script
Music/Soundtrack
Visuals
6.0
2.0
3.0
3.0
Suggestions
Can watch again
No
Good for kids
No
Good for dates
No
Wait to rent it
Yes
All the food we consume is either converted to the energy we expend or the reject we dispose of. The Dabangg franchise was once popcorn cinema, which the audience consumed with glee, and now its latest installment has reached the end of the digestive cycle. Only, this specific one takes about 3 hours to make its way out.

But why does it take so long? Have the makers of this film not heard of Metamucil, fruits and vegetables, or a script with no fat? Apparently not.

The script reintroduces us to Chulbul Pandey and his mustache (Salman Khan and his mustache), as he doles out one-liners, punches some bad guys and sometimes does both at the same time. Chulbul's reign over his area of jurisdiction comes under threat when the evil Baali Singh (Kiccha Sudeepa) is made aware of the former's presence. Baali has an old score to settle with Chulbul, and by the time we are made privy to their backstory and explore about six kabillion other sub-plots, three hours pass us by like 10,800 slaps to the face.

Like with any repeated action, it begins amusingly at first, then turns frustrating, then morphs into infuriating and finally bludgeons you into quiet submission. You can kick and scream, but you aren't overpowering Bhai and his many side-bhais anytime soon. They are loud, brash, and unrelenting. Bhai, who is a co-writer on this project, lays down one inane set up after another where the only punchline is Bhai Roxx. Bhai writes jokes that have him castrating men, has men kissing other men, has men grabbing other men by the family jewels, and men stabbing each other in the male versions of hens and cows simply because Bhai can be the only real man in a Bhai film.

But how is a man a "real man" if he doesn't prop up the women around him? Bhai spends valuable time educating the audience about the horrors of dowry, the evils of female sex trafficking, the terrors our women face at the hands of jilted lovers and so forth. But most importantly, Bhai refuses to write actual characters for his female co-stars. "Sit there and look pretty, honey," says Bhai, "the crowd in the theatre came for my pecks and the item girl's breasts, not for your brains."

Lest we forget, this film has time for poop and fart jokes. Hmm, cue our poop jokes.

The one actor whose performance and interpretation of his character that makes this long, hard bout with constipation worth enduring is Kiccha Sudeep's turn as Baali Singh. While he treads the line of being a villainy villain that does villainy things more often than not, the movie delves into his psychology in some detail. The film in general, and the actor in particular, attempt to offer a window into a warped perception of love and affection. Baali's hatred for all that Chulbul stands for stems from dissonance in ethos and not from the point of convenience or contrivance. Baali Singh convinces the audience of the merits of sitting through the pain and doing the deed in the hopes that we will be lighter and healthier on the way out.

Try as Baali might, however, the movie ultimately belongs to Chulbul. Chulbul as a character is fun, and Salman as an actor is at his best when he interacts with personalities as strong as he is. Salman's performance is at its peak when sparring against Baali Singh or sharing a laugh with the returning Naina Devi (Dimple Kapadia). When these elements go missing from the film, Salman devolves to his worst tendencies. He doesn't go down alone either - everyone around him joins in as well.

Sonakshi Sinha, Arbaaz Khan and the host of other supporting actors never come close to overshadowing Bhai. Hence the music and the cinematography enlist themsleves to do the heavy lifting of making this movie more interesting than it is.

Our mothers, religious leaders, teachers and Superstar Rajni said, "Empty vessels make more noise." If the raucous sound and a cocaine-addled camera prove anything, it is that Dabangg 3 is the emptiest of all vessels. It is so bereft of ideas sometimes that it has no trace of moisture left in it. Rajjo once makes a joke about her use of lines harkening back to the '70s and the '80s. We want to say, when a film's plot is stolen straight from the '50s and the '60s with no doubts, throwaway lines from the '70s and the '80s are the least of its worries.

Dabangg 3 makes us privy to the fact that Chulbul Pandey is not a police officer, nor is he a gunda. He is a PoliceWalaGunda, which means that he has no line that he won't cross in his pursuits. We subscribe to the same philosophy, too, and hence if he makes sh*t, we'll make sh*tty jokes about it. 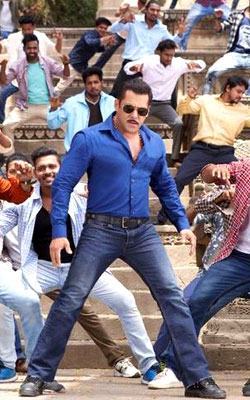 ADVERTISEMENT
This page was tagged for
dabang movie in telugu
dabang 3 telugu review\
dabang 3 review in telugu
dabbang 3telugu movies
Dabangg 3 (Telugu) telugu movie
Follow @fullhyderabad
Follow fullhyd.com on
About Hyderabad
The Hyderabad Community
Improve fullhyd.com
More
Our Other Local Guides
Our other sites
© Copyright 1999-2009 LRR Technologies (Hyderabad), Pvt Ltd. All rights reserved. fullhyd, fullhyderabad, Welcome To The Neighbourhood are trademarks of LRR Technologies (Hyderabad) Pvt Ltd. The textual, graphic, audio and audiovisual material in this site is protected by copyright law. You may not copy, distribute, or use this material except as necessary for your personal, non-commercial use. Any trademarks are the properties of their respective owners. More on Hyderabad, India. Jobs in Hyderabad.