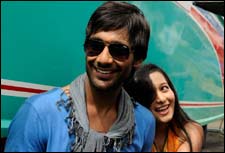 Deepa Garimella / fullhyd.com
EDITOR RATING
4.0
Performances
Script
Music/Soundtrack
Visuals
6.0
4.0
6.0
5.0
Suggestions
Can watch again
No
Good for kids
No
Good for dates
Yes
Wait to rent it
Yes
Priyudu is a silly film, but Telugu film followers will be interested to note that Varun Sandesh has indeed picked up a few skills as he said in a recent interview. Good for him, and here's hoping we'll see him in something nice some time in the future.

The movie is a plain commonplace romance, nothing more than an over-dramatization of the kind of unremarkable situations that college youth get into. This relationship-based movie gives you the moral high-ground that makes you look down condescendingly upon campus canteen crowds and go - "Sheesh, I can't believe we were such zits!" Even if you're one of them.

The story is about 1 Nos. easy-going "cool dude", Karthik (Varun Sandesh), who loves being single and hates the idea of getting into a relationship. The demure Madhu Latha (Preetika) falls for him, and her confession to her parents about her crush leads to them landing up at the boy's house to take things further. This, when her infatuation is not even a month old, and she hasn't even talked about this with Karthik. The families are even more eager to seal the match.

Karthik walks into this blissfully blissful scene in the end, and has no clue about what just happened. It is at this moment that the girl is teased into "proposing her love to her lover", and she does so, to have Karthik blurt a "yes" just to get out of this highly uncomfortable situation.

And then starts Karthik's painful exercise of trying to break up with her but not having the cheek or the brains to tell anyone how he feels. He does tell an uncle (Kota Srinivasa Rao), who gives him some drivel about how, in his times, the bride and the groom never even saw each other before getting married, and that that is why Karthik must give this a chance.

Our hero's friends tell him that he must now make Madhu Latha fall in love with another guy so that she can willingly break up with Karthik. This way, Karthik will not be the bad guy. Karthik finds an easy sucker, an admirer (Ranadheer Reddy) of Madhu Latha. Meanwhile, the lady is smitten by K, and doesn't find anything wrong with him even when he actively snubs her a billion times.

Yes, this movie has been officially "inspired by so many films", as the opening credits actually say. Every move is highly predictable, and you don't even empathize with a single character. If the romance puts you to sleep, the melodrama makes you groan.

The kids are satisfactory. Varun Sandesh has, visibly, worked on his voice, diction and his expressions, but he is still unconvincing at the things that other commercial heroes do - fight, dance, make a girl swoon. Preetika is quite suitable for her girl-next-door role, and is also attractive in an unobtrusive way. Ranadheer Reddy does well, but isn't he a misfit for the part of the meek, silent suitor?

Taagubothu Ramesh has apparently not run out of fun situations to play the wandering drunkard. In Priyudu he spruces things up at times. Vennela Kishore and Ali's fake swami act get boring after a point.

ADVERTISEMENT
This page was tagged for
Priyudu telugu movie
Priyudu reviews
release date
Varun Sandesh, Preetika Rao
theatres list
Follow @fullhyderabad
Follow fullhyd.com on
About Hyderabad
The Hyderabad Community
Improve fullhyd.com
More
Our Other Local Guides
Our other sites
© Copyright 1999-2009 LRR Technologies (Hyderabad), Pvt Ltd. All rights reserved. fullhyd, fullhyderabad, Welcome To The Neighbourhood are trademarks of LRR Technologies (Hyderabad) Pvt Ltd. The textual, graphic, audio and audiovisual material in this site is protected by copyright law. You may not copy, distribute, or use this material except as necessary for your personal, non-commercial use. Any trademarks are the properties of their respective owners. More on Hyderabad, India. Jobs in Hyderabad.