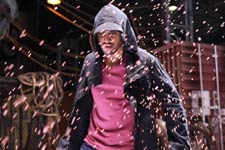 Ravi Kandala / fullhyd.com
EDITOR RATING
5.0
Performances
Script
Music/Soundtrack
Visuals
6.0
5.0
3.0
6.0
Suggestions
Can watch again
No
Good for kids
No
Good for dates
Yes
Wait for OTT
Yes
The term "average" is ambiguous. When someone says something is of "average" quality, there is little you can gather about the product in question. It could mean that it bordered on being good but never got there, or it could mean that it bordered on being bad but never got there either. It is quite alright if the product errs on the side of being good, but if the scales tilt towards the bad side, that is when you get a headache.

Tadakha is that kind of a film. Average through and through, with nary a single attempt of rising above the tide. From the leads to the production values to the music to the action, every aspect of the film borders on being mediocre, with the only good thing being that it is never really bad.

The film is about two brothers - Sivaramakrishna (Sunil) and Karthik (Naga Chaitanya). Siva is the timid sort, and Karthik is the brash younger one who keeps saving the elder one from trouble. When their father, a police inspector played by Nagendra Babu, passes away, Karthik forces Siva to accept the posting that is given to a family member.

Siva, who is scared of everything, lands up with a posting in a coastal town which is ruled by Bagga (Ashutosh Rana), a violent gangster prone to uttering punchlines and doing little else. Siva keeps solving complex cases with the help of his brother, and gets promoted twice as quickly as normal.

Trouble erupts in paradise when the goons discover his professional secret, and they then target Sunil. After this, it is standard-issue fare wherein the coward turns into Shaktimaan and the brothers finish evil together.

Thrown into this mix is the love story of the two brothers with two sisters played by Andrea Jeremiah and Tamannaah. The love stories are just excuses for songs, with no hurdles and no romance either.

The story of the film is as standard as they come. This is the kind of film in which in olden days, you would expect to see a hero in a double role do both the timid and brash acts. The only change here is that there is no double-role here, and that the younger brother only wears different colored hoodies to mask the fact that he is not who he is.

The director, Dolly, who delivered a dud earlier with Konchem Ishtam Konchem Kashtam, sticks to the Tamil original, and does not bother with any innovation. He showcases Naga Chaitanya and Sunil equally well, and gives each a shot at action, histrionics and comedy. What he sorely misses is the ability to develop strong characters that the audience will identify with. The bonding between brothers is way too superficial to draw the audience's interest. The lack of this emotional core renders the film ineffective to an extent.

Naga Chaitanya improves visibly by his earlier standards, but that is not saying much. He acquits himself well in the romantic scenes, thanks to his chemistry with Tamannaah, and is passable in the action scenes, but falls flat in the emotional scenes.

Sunil plays a stellar character that allows him to showcase comedy, action and emotion, and delivers the goods to perfection. His transformation is super believable, and was received with whistles and cheers.

Tamannaah wears demure salwars and ghagras in all the scenes she is in, and short dresses with shorter bottoms in all the songs she is in. Andrea gets a limited role, and does decently well. However, why the director chooses to show her in weird angles that project her nose awkwardly is a thing he knows best.

Ashutosh Rana is usual in the role of a badman who keeps screaming out his punchlines and making totally non-scary threats.

Thaman's music has finally broken through the barrier where it can be officially called cacophony. Extremely loud songs mar the film, and the picturisation with two good dancers (Sunil and Tamannaah), one mediocre dancer (Andrea) and one guy with three (or perhaps three hundred) left feet (Naga Chaitanya) is equally insipid.

Tadakha is clearly a film that was churned out double quickly in order to make it to the theatres in summer and get through as an also-ran instead of adding to the tally of flops that Naga Chaitanya has been drumming up. Watch it if you want to know how Sunil is drawing louder cheers than Naga Chaitanya, clearly indicating the popularity that he has begun to enjoy, and the work Naga Chaitanya has to do to catch up.
Share. Save. Connect.
Tweet
TADAKHA SNAPSHOT 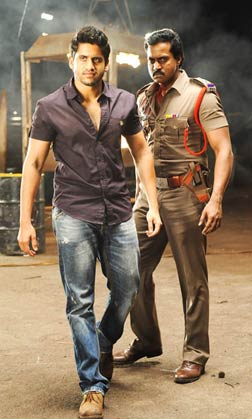 ADVERTISEMENT
This page was tagged for
Tadakha telugu movie
Tadakha reviews
release date
Naga Chaitanya, Sunil
theatres list
Follow @fullhyderabad
Follow fullhyd.com on
About Hyderabad
The Hyderabad Community
Improve fullhyd.com
More
Our Other Local Guides
Our other sites
© Copyright 1999-2009 LRR Technologies (Hyderabad), Pvt Ltd. All rights reserved. fullhyd, fullhyderabad, Welcome To The Neighbourhood are trademarks of LRR Technologies (Hyderabad) Pvt Ltd. The textual, graphic, audio and audiovisual material in this site is protected by copyright law. You may not copy, distribute, or use this material except as necessary for your personal, non-commercial use. Any trademarks are the properties of their respective owners. More on Hyderabad, India. Jobs in Hyderabad.