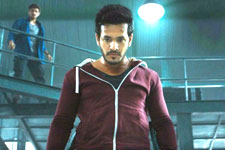 Ravi Kandala / fullhyd.com
EDITOR RATING
6.5
Performances
Script
Music/Soundtrack
Visuals
7.0
6.0
7.0
7.0
Suggestions
Can watch again
Yes
Good for kids
Yes
Good for dates
Yes
Wait for OTT
No
Appropriately enough, has to be destiny. I opened an old Word file with a previous review to begin typing this review. And I changed the cast and other details, and then I noticed the summary - it said "Just what the doctor ordered for a comeback movie". The review I was editing was that of Khaidi No. 150. And the summary could not have been more apt. Hello is probably just what the doctor ordered as a comeback movie for Akhil.

Vikram Kumar is a man who likes to stick to his patterns. His films always have signals where many of the important events of the movies start. There is an infinite emphasis on clocks. Destiny plays a very important role in the movies, and you necessarily have to suspend your disbelief since these are events that will only happen in a movie (actually, will seem far-fetched even in movies). But if you look at the movies as some kinds of fairy tales, they can seem pretty good. Ask yourself a simple question before you head to Hello - did you buy the conceit in Manam? If the answer is yes, Hello will probably work pretty well for you.

Hello is the story of a boy Avinash (Akhil, and played by Mikhail Gandhi in the child version), who is waiting for a girl who he had met when they were both very young children and who moved to Delhi. Avinash cannot forget her, and keeps going to the signal where he had met her, at exactly 7:30 am every day. One day, he hears a tune being played while on a phone call, and before he can find out where the tune is being played, his phone is stolen. How Avinash gets his phone and the love of his life back form the rest of the movie.

Hello is a story steeped in coincidences and unnatural happenings. Akhil's efforts to retrieve his phone are divided into three long parkour stunt sequences that are interspersed with flashbacks. The entire movie happens in a day while the flashbacks keep telling you what led to those points in the story. It is to Vikram Kumar's credit that he does not confuse the audience no end with this toggling screenplay.

His minute attention to detail stands out, too. The hundred rupee notes used in the childhood episodes are all from the old series. He uses newspapers to show you the time period (like he did in Manam), and even makes an environmental statement in the middle of all the action and love sequences. The pace of the movie, however, is quite leisurely, and for people unwilling to take a slow romance, the film might prove quite boring. Towards the end the coincidences pile up and might seem like too much of a stretch for people unable to take the leap of faith.

Akhil does well. The story requires him to behave like a rich kid in search of something, and he pulls it off quite easily and naturally. Kalyani Priyadarshan is cute and plays her role quite convincingly - definitely another deviation from the alabaster automations from North India that we are used to. There are hardly four or five other characters in the movie, and they all enact their roles well enough, with special mention going to the girl who essays the young Junnu.

The songs play out really well on screen, and the music - background and otherwise - stands out. Anup Rubens clearly has another winner on his hands. The visuals are a delight - the entire film looks beautiful, and it is the DOP's credit that the movie, shot in and around Hyderabad, shows us the city in an entirely new light. The production values are extravagant and show on screen.

Hello is just what the doctor ordered for Akhil. It shows him as a young, athletic city-bred boy instead of in the massy avatar that Akhil tried to project him in. Go watch this one after taking your thinking cap off, and you won't regret it one bit.
Share. Save. Connect.
Tweet
HELLO SNAPSHOT 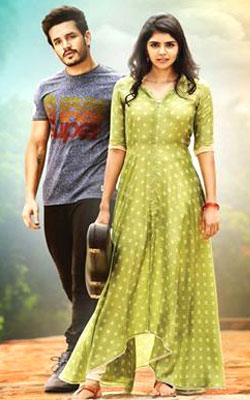 ADVERTISEMENT
This page was tagged for
Hello telugu movie
Hello reviews
release date
Akhil Akkineni, Kalyani Priyadarshan
theatres list
Follow @fullhyderabad
Follow fullhyd.com on
About Hyderabad
The Hyderabad Community
Improve fullhyd.com
More
Our Other Local Guides
Our other sites
© Copyright 1999-2009 LRR Technologies (Hyderabad), Pvt Ltd. All rights reserved. fullhyd, fullhyderabad, Welcome To The Neighbourhood are trademarks of LRR Technologies (Hyderabad) Pvt Ltd. The textual, graphic, audio and audiovisual material in this site is protected by copyright law. You may not copy, distribute, or use this material except as necessary for your personal, non-commercial use. Any trademarks are the properties of their respective owners. More on Hyderabad, India. Jobs in Hyderabad.