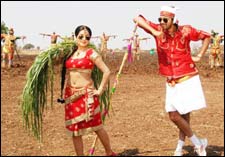 Deepa Garimella / fullhyd.com
EDITOR RATING
7.0
Performances
Script
Music/Soundtrack
Visuals
8.0
7.0
6.0
6.5
Suggestions
Can watch again
Yes
Good for kids
Yes
Good for dates
Yes
Wait for OTT
NA
Move over big-budget banners, the season's Allari Naresh flick is here. As always, it merely walked in rather humbly and with a job to do - sans pre-release fanfare, sans inflated promises, sans the fuss. And as (almost) always, it is destined to have the last laugh, and possibly, the most staggering ROI amongst its competitors this summer.

Slapstick, simple old-fashioned emotions and a dose of gentle viplavam come together in a film that is both thigh-slappingly hilarious as well as tear-jerkingly sweet. Indeed, there's no other way to say this - Seema Tapakai is a masterstroke in its genre.

It's the kind of film in which Brahmamandam's entry - usually used to power up limp second halves of movies nowadays - and his presence pale in comparison with whatever else is happening on screen. And it's not even a hard-core comedy cast that we're talking about: most of Seema Tapakai has only Allari Naresh, Sayaji Shinde and Nagineedu (the latter two not even being comedians), and a miscellaneous cast consisting of people like Sudha and Surekha Vani.

The plot goes like this - Krishna (Allari Naresh) is the son of a crorepati GK (Sayaji Shinde), and was brought up in the lap of luxury. He falls in love with Satya, a largely naive girl whose sole purpose of life is to make the rich give up their wealth for the poor.

Krishna, with the help of his sidekick (amazingly played by Vennela Kishore), spends half the movie trying to make him and his family look poor and getting her to agree to marry him. The bigger problem, however, is Satya's family (Nagineedu and Rao Ramesh).

Essentially, it is Krishna's endeavors to look beggarly that are hilarious. So are his later attempts to win over the raging factionist Venkatappa (Jayaprakash Reddy). The humour is well-written and neatly executed. There are few weak links in the tireless string of jokes thrown at you.

Also, Seema Tapakai makes no bones about the messages it wants to send out and the emotions it deals with. Satya's aim of telling billionaires to spend money on the poor is a concept cleverly delivered - with the movie poking fun at itself first, and then showing you some poignant scenes involving people actually changing heart. Ditto for its anti-violence agenda, which is implemented to rather touching effect. Sure, there are caricatures and 2-dimensional characters galore, but it's all very easy on the senses, and no one's left unhappy in the end.

The casting is perfect, and the whole ensemble of actors is clearly having fun. Whether it is Allari Naresh's poker-faced rendering of dialogues like "Daridram maa nanna ni 20-20 aadukuntondi", Sayaji Shinde's exasperated screams of disgust, or Jayaprakash Reddy's comical discomfiture and his Seema accent - the on-screen party is highly infectious. And it's nice to see Vennela Kishore getting a lot of airtime, which he handles well.

The women also have some great humour moments. Poorna has no comedy, but makes for a good heroine overall.

The songs are better than those in most Allari Naresh flicks, but they're so much of a distraction from the movie that you don't care. The production values are above average, too.

The most delightful Telugu film to have hit theatres in quite a while. Take the friends, take the kids, take the parents, take the grandparents. And let your hair down, even if for just a while.
Share. Save. Connect.
Tweet
SEEMA TAPAKAI SNAPSHOT

ADVERTISEMENT
This page was tagged for
seema tapakai full movie
seema tapakai telugu movie
Seema Tapakai telugu movie
Seema Tapakai reviews
release date
Follow @fullhyderabad
Follow fullhyd.com on
About Hyderabad
The Hyderabad Community
Improve fullhyd.com
More
Our Other Local Guides
Our other sites
© Copyright 1999-2009 LRR Technologies (Hyderabad), Pvt Ltd. All rights reserved. fullhyd, fullhyderabad, Welcome To The Neighbourhood are trademarks of LRR Technologies (Hyderabad) Pvt Ltd. The textual, graphic, audio and audiovisual material in this site is protected by copyright law. You may not copy, distribute, or use this material except as necessary for your personal, non-commercial use. Any trademarks are the properties of their respective owners. More on Hyderabad, India. Jobs in Hyderabad.