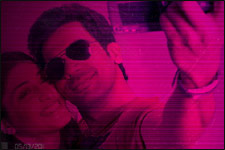 Nupur Barua / fullhyd.com
EDITOR RATING
6.0
Performances
Script
Music/Soundtrack
Visuals
8.0
6.0
6.0
8.0
Suggestions
Can watch again
Yes
Good for kids
No
Good for dates
Yes
Wait for OTT
No
Rumour has it that Ekta Kapoor was warned, by well-wishers, not to produce a paranormal thriller, but she went ahead with Ragini MMS. She also made her title credits roll against a backdrop of chants from the Hanuman Chalisa, in an attempt to ward off any negative forces.

A popular devotional mantra as a title song may place you in a dimension far removed from horror, true, but in this case, it eases you into the movie. And as you settle into your seats to watch the story of a date gone horribly wrong, here is a warning - do not get too comfortable, and make sure you have somebody to cling to.

Uday Jhala (Raj Kumar Yadav) and Ragini (Kainaz Motivala) set out alone for a romantic weekend, to a bungalow in the middle of nowhere. Uday is a crass, cursing, obnoxious young man with a video camera, and apparently unpopular with Ragini's friends. He is also a wannabe actor, willing to sell his soul for his 15 minutes of fame. Ragini, on the other hand, is the girl next door, made of sugar and spice and all things nice, who lies to her mother about where she is headed over the weekend. The couple purchases petrol, basic essentials and an obscene number of condoms, and they drive out of town.

They finally reach a large gate, outside which they park their vehicle, and trek a short distance to the old house beyond the tall trees. As Uday looks for the mains that will turn on the electricity, you discover that he has his own agenda for bringing Ragini to this deserted place - his godfather in the industry has rigged the entire house with hidden cameras, a la Bigg Boss, to record the couple's sexcapades. The footage, the benefactor guarantees, will make Uday a celebrity overnight.

A few creaking stairs, slamming doors, graphically inserted centipedes and loud bangs later, the couple realise that they are not alone. The element of suspense is done away with earlier in the movie, when a visiting friend tells Uday that the house is haunted by a woman who was killed by her own family. What is left to speculation is what this ghost plans to do with the couple. Needless to say, despite the numerous intimate scenes, the condoms are never used.

The first half of the movie is slightly pointless, and depends on shock value. The character of Uday cannot stop abusing, and Ragini's meekness is slightly exasperating. Just before intermission, as they are about to go beyond the heavy necking, Uday feels somebody tugging at his hair. And thus begins the action.

The second half is far superior to the first, and Ekta has a winner here. This is the portion of the movie that the audience comes away with. Raj Kumar Yadav, of Love, Sex Aur Dhoka fame, is a brilliant actor, to say the least. Make no mistake, he is here to stay. Kainaz Motivala is a gem of a discovery. Together, these two young actors turn what could have become an average horror movie into what might just become a cult classic.

The execution is heavily influenced by The Blair Witch Project, Paranormal Activity, and even 127 Hours. Why the Maharashtrian ghost, whose dialogues are sub-titled in Hindi, wants to harm the couple remains a mystery. The script could have been tighter and more logical.

The supporting cast could have been chosen a little more wisely, especially the visiting couple whose histrionics get on to your nerves. And the background score need not have been so obvious. None of that is important, however. What matters is that you will shut your eyes more often than not, and, when you walk out of the theatre, you will wax eloquent about the two actors. As Ekta Kapoor admitted before the release, the movie drains you, but you will recommend it to your friends, if not your family.
Share. Save. Connect.
Tweet
RAGINI MMS SNAPSHOT

ADVERTISEMENT
This page was tagged for
Ragini MMS hindi movie
Ragini MMS reviews
release date
Raj Kumar Yadav, Kainaz Motivala
theatres list
Follow @fullhyderabad
Follow fullhyd.com on
About Hyderabad
The Hyderabad Community
Improve fullhyd.com
More
Our Other Local Guides
Our other sites
© Copyright 1999-2009 LRR Technologies (Hyderabad), Pvt Ltd. All rights reserved. fullhyd, fullhyderabad, Welcome To The Neighbourhood are trademarks of LRR Technologies (Hyderabad) Pvt Ltd. The textual, graphic, audio and audiovisual material in this site is protected by copyright law. You may not copy, distribute, or use this material except as necessary for your personal, non-commercial use. Any trademarks are the properties of their respective owners. More on Hyderabad, India. Jobs in Hyderabad.