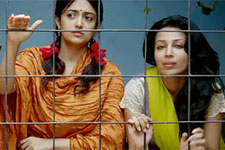 Nupur Barua / fullhyd.com
EDITOR RATING
5.0
Performances
Script
Music/Soundtrack
Visuals
6.0
5.0
5.0
6.0
Suggestions
Can watch again
No
Good for kids
No
Good for dates
No
Wait for OTT
Yes
When Nagesh Kukunoor burst into our lives in 1998 with Hyderabad Blues, he was immediately hailed as one of the most important filmmakers this country has ever had. His subsequent films, however, were relatively disappointing, although Iqbal did receive plenty of critical acclaim, and 3 Deewarein has a cult following. Known for his relationship-based films, mostly, his latest release, Lakshmi, is not quite what you expect from him; but then again, as he mentioned in various interviews, he wanted to pick on an issue that most filmmakers often gloss over, and remind us that the world is not a rosy place.

Chinna (Nagesh Kukunoor) is on a truck with a group of girls, headed to an unidentified location, when the movie begins. The truck driver drops them off in the middle of nowhere, and they sit by the side of the road, till Chinna's elder brother, Reddy (Satish Kaushik), arrives. He notices that one of the girls, Lakshmi (Monali Thakur), is but a minor, and he slaps Chinna, saying that he should know better.

He then takes Lakshmi home, where he hands her over to his housekeeper (Vibha Chibbar). The frightened Lakshmi eventually relaxes and becomes the housekeeper's assistant.

Three weeks into her stay, Reddy comes home one evening and drags her into his bedroom, where he rapes her. Lakshmi is then handed over to Chinna, and he in turn hands her over to Jyothi (Shifaali Shah), the "madam" who runs his brothel.

With aid from a helpful and sympathetic roommate Suvarna (Flora Saini) and advice from Jyothi, Lakshmi settles down to becoming a prostitute, servicing as many as seven men in a night. She forms a bond with the other women, but she never gives up on her plans to run away. After one of her numerous failed attempts, Chinna beats her badly enough to make her ill, and she is not allowed to avoid clients. Fortunately, a surprise raid rescues her, and she is placed in an NGO hostel, which is when she decides to sue the Reddy brothers for her fate.

Before the movie begins, the makers tell us that the story is based on incidents that really happened but that the narrative is fiction. This contradictory statement is what prevents you from being too involved with the protagonist. The shock value is extreme, to say the least, in dialogues and actions, and keeps you riveted, at least till interval, to your seat.

When the court case begins, the story begins to lost plot, and hurries towards a predictable end. There is no drama, nor intrigue, despite the angle of a young girl taking on some very dangerous men. To add to the confusion, the makers tell you, at the end, the fate of Lakshmi, her father, Reddy, etc. Wait a minute, did the director not say that this is based on various events, and therefore a work of fiction?

Setting aside that one sore point, the director has obviously done his research, and it shows in the helplessness of these women who are forced into a profession that has no dignity. The lack of alternatives in the lives of such women is scary. For example, when the NGO rescues them, they relax in the hostel for a while, and then they run back to the brothel, since they have nowhere else to go, and since basket-weaving is just so dull. In a country that worships female deities, it is ironic that a girl's own family is responsible for her despair and vulnerability.

Nagesh Kukunoor does not believe in sugar-coating his message, and the film is a hard-hitting one. It makes you cringe, especially since he does not shy away from discussing the state of a 14-year-old prostitute's genitalia after too much sex.

Monali Thakur, with her wide eyes and perfect skin, is a convincing teenager. She knows her expressions, and this movie rests squarely on her shoulders. There are times when she looks older than the character she portrays (because she is older), but only when she has make-up on.

Nagesh Kukunoor is the perfect villain - he looks psychologically disturbed, and you can see why the girls are scared of him. You forget that this is the soft-spoken man that you see on television interviews.

Satish Kaushik is suitably slimy, and Shifaali Shah is perfect in her role. Flora Saini and Vibha Chibbar deserved lengthier roles. And Ram Kapoor looks confused about the intensity with which he has to play a nervous lawyer. In fact, he looks more sleepy than paranoid.

The movie is set in Hyderabad, but it could be anywhere, so realistic are the locations. The absence of glamour, even in rich man Reddy's house, is commendable. The interiors of the brothel are a little too dingy, but it works.

The costumes are done well, but Lakshmi wearing girly clothes after her transformation seems a little stretched. The cinematography is gritty, and effective, but the insertion of lower resolution footage once in a while does not serve any purpose, and can be distracting.

The music is mostly in the background, and not jarring, but it is a little average. The length of the movie ensures that it does not become too tedious to watch, and some of the sequences are edited quite well. Some self-indulgence is evident in sequences such as the one about Jyothi's revenge, and those look contrived.

Lakshmi is an important film, because it reminds us that we are lucky to be alive in a world that is so cruel. It exposes our vulnerability and our lack of choices. And, to paraphrase the tag line, it reminds us that we need to become more human. Watch it for the message, and for the acting.
Share. Save. Connect.
Tweet
LAKSHMI (HINDI) SNAPSHOT 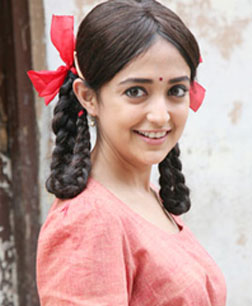 ADVERTISEMENT
This page was tagged for
Lakshmi (Hindi) hindi movie
Lakshmi (Hindi) reviews
release date
Monali Thakur, Satish Kaushik
theatres list
Follow @fullhyderabad
Follow fullhyd.com on
About Hyderabad
The Hyderabad Community
Improve fullhyd.com
More
Our Other Local Guides
Our other sites
© Copyright 1999-2009 LRR Technologies (Hyderabad), Pvt Ltd. All rights reserved. fullhyd, fullhyderabad, Welcome To The Neighbourhood are trademarks of LRR Technologies (Hyderabad) Pvt Ltd. The textual, graphic, audio and audiovisual material in this site is protected by copyright law. You may not copy, distribute, or use this material except as necessary for your personal, non-commercial use. Any trademarks are the properties of their respective owners. More on Hyderabad, India. Jobs in Hyderabad.