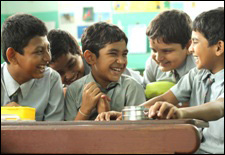 Nupur Barua / fullhyd.com
EDITOR RATING
5.0
Performances
Script
Music/Soundtrack
Visuals
6.0
4.0
5.0
5.0
Suggestions
Can watch again
Yes
Good for kids
Yes
Good for dates
Yes
Wait for OTT
Yes
Inspired by Ekta Kapoor, whose Ragini MMS also released this Friday, Partho told his father, Amole Gupte, that the crew of Stanley Ka Dabba needed to visit a few places of worship in the city, to guarantee appreciation for the film. Whether you believe in divine intervention or not, fact remains that this 'little story with a big heart' will be noticed for its protagonist, and for the quirky title montage.

Stanley (Partho) is a student of Class 4F, at the Holy Family School, who reaches the classroom much before his classmates make an appearance. He is a teller of tall tales, always dramatising incidents of his daily life, and is extremely popular with the other boys for his ability to sing, dance and generally entertain. Even the English teacher, Miss Rosy (Divya Dutta), cannot help but display some favouritism towards him.

Babubhai Verma, a.k.a Khadoos (Amol Gupte) is the paan-chewing mumbling Hindi teacher, who has no qualms stealing food from a colleague's handbag, but never forgets to reprimand Stanley for helping himself to his generous classmates' dabbas. The Science teacher (Divya Jagdale) spends a quarter of her class in reminding the students to sit straight and to praise students who can churn out not-so-innovative ideas for projects.

The plot revolves around the daily interactions between Stanley and his friends, and his teachers. Many dabbas later, you realise that Stanley seems to be harbouring some deep, dark secret, inviting the ire of the Hindi teacher. Stanley's attempts to express his creativity lead to more chastisement. Khadoos even goes so far as to tell a left-handed Stanley that Saraswati dwells in the right hand, and that therefore he should endeavour to become 'normal'.

Stanley Ka Dabba is not really a children's movie, although it is promoted as one, and is simple enough. A slice-of-life film, it gets a little monotonous at times. There are no major conflicts, and the anti-hero, Khadoos, is more of a caricature than a threat. In the end, it is a only story of unconditional friendship, overcoming adversaries, and smiling through it all. Nor is it a serious film with an issue, although there are references made to the education system and the pressure on a child to keep up appearances.

The script has some major logical flaws. In real life, every teacher of a school is made aware of a child's background, especially if there is something tragic or extraordinary about it. Most schools nowadays insist on Parent Teacher Associations. But in the movie, the Principal (Rahul Singh) is the only one who knows anything about Stanley.

The story begins at a point in Stanley's life where everybody in class knows and loves him. However, somewhat inexplicably, his classmates become conveniently curious about his life only towards the end. And although Miss Rosy is sugary-sweet, there is no reason why she should address 10-year-old boys with 'Good morning, my babies', or, 'How are you, my sweeties?'.

Partho is a natural, and ably supported by a crew of young boys with great potential. Amol Gupte is believable as Khadoos. Both the Divyas overact a bit, but create an impact. Raj Zutshi's role as the new History teacher is pointless, and wasted. Aditya Lakhia makes his presence felt as the peon, but he has some 3 scenes, none of which contribute to the story. Rahul Singh as the benevolent Principal could have done better.

Shot on 7D, Stanley Ka Dabba is a result of workshop sessions with school children, every Saturday, apparently. The crew was limited to about 5 people. Amol Gupte claims that most of the time, the children did not know that they were being filmed, thanks to the presence of an unintimidating camera. The music is decent, and the twist in the tale is predictable.

The movie has its moments, sure, but comparisons with Taare Zameen Par are inevitable, given Gupte's contribution to both films. Stanley Ka Dabba lacks drama, but the sincerity of the project makes up for it, almost - if only it were shorter in length.
Share. Save. Connect.
Tweet
STANLEY KA DABBA SNAPSHOT

ADVERTISEMENT
This page was tagged for
Stanley Ka Dabba hindi movie
Stanley Ka Dabba reviews
release date
Partho, Amole Gupte
theatres list
Follow @fullhyderabad
Follow fullhyd.com on
About Hyderabad
The Hyderabad Community
Improve fullhyd.com
More
Our Other Local Guides
Our other sites
© Copyright 1999-2009 LRR Technologies (Hyderabad), Pvt Ltd. All rights reserved. fullhyd, fullhyderabad, Welcome To The Neighbourhood are trademarks of LRR Technologies (Hyderabad) Pvt Ltd. The textual, graphic, audio and audiovisual material in this site is protected by copyright law. You may not copy, distribute, or use this material except as necessary for your personal, non-commercial use. Any trademarks are the properties of their respective owners. More on Hyderabad, India. Jobs in Hyderabad.