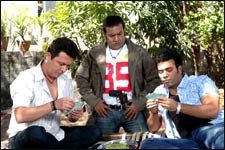 Deepa Garimella / fullhyd.com
EDITOR RATING
6.0
Performances
Script
Music/Soundtrack
Visuals
7.0
5.0
7.0
6.5
Suggestions
Can watch again
No
Good for kids
No
Good for dates
Yes
Wait to rent it
Yes
The trailers looked eager to please, and seemed inspired by contemporary box-office-friendly fare. Fortunately, what you saw there was quite what you get in Zabardast. Because the show just got better.

Somebody finally seems to have access to a decent amount of money - and heck, online partners - now, and it shows. The Angrez team has now come up with a product that might well start making their franchise appeal to an audience wider than their current, restricted - although loyal - target market.

The shift is even more significant than in their last movie, thanks mostly to the quality camera work and the engaging soundtrack, the latter of which actually makes the script look good. There's rap music, beats, titled camera angles, close-ups, and more, in what looks like a step forward.

The outcome of it all is not just a better movie - it's potential. Aziz Nasser, the director of most of these flicks, comes across as a fine actor. And Adnan Sajid, already beloved among his fans (to draw a parallel for the uninitiated, he's pretty much the Brahmanandam of Hyderabadi movies), is a good performer, too. Coupled with better writing and direction, these actors do seem ready for bigger things.

Moving on to the plot, 2 handcuffed criminals Laddoo (Mast Ali) and Ajju (Aziz Nasser) make a run for it from under the nose of inspector RK (RK). They unwittingly land in Shaitanpur, where Tillu Terror (Adnan Sajid) claims he has a hold.

Tillu wants to make use of the pair of smart-aleck fugitives in order to find a treasure he's been hankering after. Meanwhile, there's a bunch of other goons that the Tillu Terror camp has to worry about.

A little bit of toilet humour aside, there's a fair amount of slapstick delivered well. The lines are basic, but the trio (Mast Ali's deadpan included) is good at the comic timing. In the end there's a Priyadarshan-style chase caper that the makers would rightly want to brag about as the high point of the flick.

However, the romantic tracks reek of little innovation, making the women look like unnecessary distractions. Also, the heroines in this franchise seem to need better stylists now.

The slick treatment, like we said, is what works for this movie. So do the performances. RK, Dilwar Faheem, Zarine Ali and others are peripheral but they all do a pretty good job.

Things are probably still not there as yet, but for an assembly line that seemed to be stuck with churning out tiresome B-grade fare, the latest one seems like a welcome break. Those not familiar with this brand of movies might want to wait a bit for something better, but the curious can go give it a try.
Share. Save. Connect.
Tweet
ZABARDAST SNAPSHOT

ADVERTISEMENT
This page was tagged for
zabardast hyderabadi movie
zabardast hyderabadi movie cast
Hydrabad movie jabardast online
hyderabad movie zabardast
Zabardast hindi movie
Follow @fullhyderabad
Follow fullhyd.com on
About Hyderabad
The Hyderabad Community
Improve fullhyd.com
More
Our Other Local Guides
Our other sites
© Copyright 1999-2009 LRR Technologies (Hyderabad), Pvt Ltd. All rights reserved. fullhyd, fullhyderabad, Welcome To The Neighbourhood are trademarks of LRR Technologies (Hyderabad) Pvt Ltd. The textual, graphic, audio and audiovisual material in this site is protected by copyright law. You may not copy, distribute, or use this material except as necessary for your personal, non-commercial use. Any trademarks are the properties of their respective owners. More on Hyderabad, India. Jobs in Hyderabad.