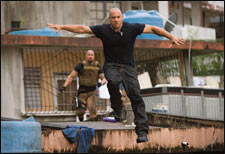 Nupur Barua / fullhyd.com
EDITOR RATING
5.0
Performances
Script
Music/Soundtrack
Visuals
5.0
4.0
4.0
5.0
Suggestions
Can watch again
Yes
Good for kids
Yes
Good for dates
No
Wait to rent it
Yes
If you are a fan of the Fast And The Furious series, you will find nothing abnormal in grown men air-surfing on a car plunging many feet into a fast and furious river, in cars racing at the speed of lightning, in a pregnant woman driving out of a moving train onto an unpaved road, unharmed, in surviving bullets and cars that turn turtle with alarming alacrity, and in the mind-boggling biceps that The Rock possesses. Hold on to a willing suspension of disbelief, and join the fast (yes, very) and the furious (always) men and women, as they embark on their 5th adventure in yet another exotic location.

First and foremost, embrace the knowledge that Americans are allowed to enter any country, and beat the living daylights out of the citizens there, without repercussions. They can also kill, destroy public property, and deface the region, but they are answerable only to authorities from the USA (read FBI). If Obama can order Osama killed in a country where the USA has no official administrative authority, and become a hero, then Hollywood is justified in presenting art that imitates life.

Dominic Toretto (Vin Diesel) is on his way to prison, but some clever car tricks later, in which the bus transporting prisoners is smashed (but no fatalities - a miracle), he is rescued from a life behind bars by his beloved sister Mia (Jordana Brewster) and her boyfriend Brian O'Conner (Paul Walker).

They disappear, to Rio de Janeiro, and immediately sign up for a mission that involves stealing exotic cars from a moving train. Not only do they mess up the operation and manage to attract the attention of the FBI (after the deaths of a couple of agents who were on the train, in charge of the cars), they also acquire a powerful enemy, Reyes (Joaquim de Almeida). Reyes is so powerful in Rio that he can store his ill-gained cash in an institution safer than a bank - the police headquarters.

Enter Hobbs (The Rock), a bald and bearded FBI agent, who specializes in capturing absconding criminals. He makes Rio his backyard, barking orders at local law officers, imposing his team on them, and picks his personal choice of local assistant - a young officer named Elena (Elsa Pataky), who, he believes, has 'motivation' since her policeman husband was killed not too long ago.

Now Mia is pregnant, and she wants to settle down. However, Dom is determined to teach Reyes a lesson, and thus begins the planning of one last heist, which is impossible, of course, unless they have their trusted team members flying halfway around the world into Rio. Enter some familiar faces from the past four movies, and the game begins. The rest of the movie is all about performing unbelievable feats on speeding vehicles.

Worth watching for the action, mostly, Furious Five has many references to the first 4 movies, which you have to watch to understand the equation between all the characters. Vin Diesel mumbles his way through this one, too. Jordana Brewster is no longer caught between her brother and her lover, so she seems a little relaxed, but has less to do.

Paul Walker is one-dimensional. He seems incapable of emoting, especially when Mia tells Brian that she is pregnant. The Rock perspires all over screen while flashing his big arms. There are some electric moments when The Rock and Vin Diesel fill the screen. Tyrese Gibson gets some genuinely funny dialogues, and he delivers them with panache. The relationship between Elena and Dom seems implausible.

This is Justin Lin's third Fast And Furious movie, and the comfort level shows. Watch it for an adrenaline rush, but do not expect anything spectacular. It has an average plot, and, one suspects, this movie is just an ordinary curtain raiser to the 6th film in the series. What is commendable, however, is the lack of blood and gore, no matter how fatal the accidents. Can watch with the family.
Share. Save. Connect.
Tweet
FAST & FURIOUS 5 SNAPSHOT

ADVERTISEMENT
This page was tagged for
Fast & Furious 5 english movie
Fast & Furious 5 reviews
release date
Vin Diesel, Paul Walker
theatres list
Follow @fullhyderabad
Follow fullhyd.com on
About Hyderabad
The Hyderabad Community
Improve fullhyd.com
More
Our Other Local Guides
Our other sites
© Copyright 1999-2009 LRR Technologies (Hyderabad), Pvt Ltd. All rights reserved. fullhyd, fullhyderabad, Welcome To The Neighbourhood are trademarks of LRR Technologies (Hyderabad) Pvt Ltd. The textual, graphic, audio and audiovisual material in this site is protected by copyright law. You may not copy, distribute, or use this material except as necessary for your personal, non-commercial use. Any trademarks are the properties of their respective owners. More on Hyderabad, India. Jobs in Hyderabad.