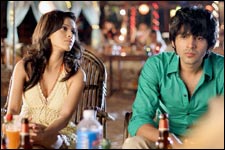 Deepa Garimella / fullhyd.com
EDITOR RATING
5.0
Performances
Script
Music/Soundtrack
Visuals
6.0
6.0
7.0
7.0
Suggestions
Can watch again
No
Good for kids
No
Good for dates
No
Wait to rent it
Yes
The easier thing to do while watching Pyaar Ka Punchnama is to call it misogynistic. Or to dismiss the ordeal that its leading boys go through, by saying that they hooked up with the wrong women. The tougher thing to do (if you're a woman, that is) is to acknowledge the b***h in you. Which - let's face it, sisters - is always the tougher thing to do.

While many will argue that the only way the human race can be happier is by becoming asexual, fact remains that people - both men and women - in general are in denial about the fact that men and women are simply wired differently. Which is the page you ought to be on if you're watching Punchnama, a film that is being marketed as a woman-basher, but that actually had potential.

Pyaar Ka Punchnama, if perfected, could have been a stupendous film. The gaalis might have the young men in the audience all cheering and clapping, but there's immense depth beyond the cool-dude-ish buddy bonding and the anti-romance comebacks that the makers are using to advertise the movie.

Written by someone with a clever understanding of the man-woman divide, the movie is an incredibly astute look at romantic relationships. 3 young men are getting into relationships for the first time, and get involved with the kind of women who give women a bad name.

So you have needy, demanding, manipulative, arbitrary, talkative, manipulative, shrill, provocative, manipulative and unwittingly-unethical - all this put together in just 3 ladies. As for the boys, they never form a "union" or do any of the mean things they advertise in their speeches in the promos, but just grin and bear it all.

Well, it's tricky to do this without seeming offensive and irreverent to some extent. There are jokes and swear words being bandied around. However, the wearisome boy-girl conversations are uncannily real, and might seem worth a chuckle every once in a while (especially if you're in your '20s and know them to happen, either to you or to someone you know). Again, if you're female, you'd need a good ability to laugh at yourself in order to enjoy this.

Which turns out to be the film's main flaw. The writers caricaturize the girlfriends and stretch their foibles to uncomfortable extents, treading a thin line between satirical and offensive. The girls are clearly at fault the whole time, and it's unbelievable that they can be so consistently selfish and insensitive. Also, the film drags towards the end, looking exactly like a collage of boyfriend-girlfriend fights you've probably aren't interested in seeing resolved.

The performances aren't out of the world, but on the plus side, Divyendu Sharma (who plays Liquid) packs in a heart-rending punch towards the end. Among the girls, Nushrat is good.

Also, the film's been edited pretty well. Some of the dialogues are well-written; they're not reams of prose, but quite well-timed and spot on. The music powerfully aids the film's mood, which ranges from comical to emotional. The story's been set in Delhi, so the look and feel of the movie are urban.

As is obvious, head for it if you're a guy who's been newly introduced to a woman's jagged edges. And if you're a woman who can laugh at her jagged edges. We can't promise much for the rest, or for people out on a date.
Share. Save. Connect.
Tweet
PYAAR KA PUNCHNAMA SNAPSHOT

ADVERTISEMENT
This page was tagged for
Pyaar Ka Punchnama hindi movie
Pyaar Ka Punchnama reviews
release date
Kartikeya Tiwari, Rayo Bhakhirta
theatres list
Follow @fullhyderabad
Follow fullhyd.com on
About Hyderabad
The Hyderabad Community
Improve fullhyd.com
More
Our Other Local Guides
Our other sites
© Copyright 1999-2009 LRR Technologies (Hyderabad), Pvt Ltd. All rights reserved. fullhyd, fullhyderabad, Welcome To The Neighbourhood are trademarks of LRR Technologies (Hyderabad) Pvt Ltd. The textual, graphic, audio and audiovisual material in this site is protected by copyright law. You may not copy, distribute, or use this material except as necessary for your personal, non-commercial use. Any trademarks are the properties of their respective owners. More on Hyderabad, India. Jobs in Hyderabad.