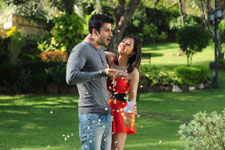 Nupur Barua / fullhyd.com
EDITOR RATING
3.0
Performances
Script
Music/Soundtrack
Visuals
5.0
3.0
4.0
5.0
Suggestions
Can watch again
No
Good for kids
No
Good for dates
No
Wait to rent it
No
An Indian rom-com is a precarious proposition, and the writer is usually so taken in by the Hollywood movies in the genre that, usually, nothing original shines through. Badmashiyaan - Fun Never Ends is a strangely titled movie, endorsing, as it does, dishonesty as a fun thing, and, as expected, falling flat on its face in its effort to make a mark in Indian cinema. First, however, the story.

Naari (Suzanna Mukherjee) is a con-woman. She effectively ruins the lives of three men, who all happen to fall in love with her. First, there is Dev (Sidhant Gupta), a rather self-assured young romantic. He falls head over heels in love with her, and even borrows an obscene amount of money from the bank to buy a dream-house for his love and himself. In typical con-woman style, Naari disappears. And Dev wonders where he went wrong.

Which is why he hires his old friend, Pinkesh (Karan Mehra), who is also a detective, to look for her. Pinkesh is intrigued enough by his chum's story to jump headlong into a search, and he finally finds her. Given his fascination with Naari, it is inevitable that Pinkesh will fall in love with the said trickster. The smart Naari, however, merely plays along.

What Pinkesh does not know is that Naari already has a dangerous history, and that includes a mobster, Jazzy (Sharib Hashmi). You see, Naari has left Jazzy in the lurch as well, and he is determined to teach her a lesson. Unfortunately for Pinkesh and Dev, Jazzy comes in contact with them, and their shared misfortunes need not necessarily be a safety net for the romantic lover and the intense detective.

In the meantime, Dev may have just moved on with Palak (Gunjan Malhotra), who has been his shoulder to cry on ever since he turned to impractical deeds to overcome the great betrayal. Will Naari's reappearance create chaos? Of course. How will it all play out, though? For that, you have to sit through the movie.

And it is not easy to do that, despite the very simple premise that the script is built on. The writing is lazy, for one. And predictable. And after Dolly Ki Doli, not so unique or interesting, either. It is imperative that a con-woman in Indian cinema possess a heart of gold - otherwise she would not make a good protagonist. Naari is dull, and tedious, and you wonder why she has three men running after her. The hunt for Naari is reminiscent of There's Something About Mary, but without the excitement of the chase.

The humour is bland, to put it mildly. And very, very contrived. It is almost embarrassing, in fact, to watch the characters act out their "funny" bits. The inclusion of various sub-plots - an effort, no doubt, to add to the chaos and humour quotient - seems unnecessary, and adds nothing to the screenplay. The dialogues fare no better, and, again, do not aid your understanding of this seemingly inane plot. In short, you will neither empathise nor sympathise with the characters, and that is bad news as far as the entertainment quotient is concerned.

Suzanna Mukherjee, a Roadies girl, goes over the top with her portrayal of Naari. She overdoes every reaction and dialogue, and is too loud for you to be indulgent about the fact that this is her first film. Sidhant Gupta is dull, and Sharib Hashmi is out of his depth. Gunjan Malhotra is sincere, and Karan Mehra is the only actor in the movie to display some calibre. The other actors are not very impressive, either.

The production and costume designs add to the dreariness of the script. The setting is Chandigarh, but there are no interesting visuals that add to the character of the movie. The costumes are dull, and look like they have been put together hurriedly with not much thought put into them. The quality of the visuals is decreased by the lacklustre cinematography. The music is instantly forgettable, and the editing is sloppy.

It is unfortunate that independent and small-budget filmmakers do not take advantage of the opportunity to give us a story worth sitting through. Badmashiyaan is not worth a watch, and avoiding it would be a favour you'd do yourself this weekend.
Share. Save. Connect.
Tweet
BADMASHIYAAN SNAPSHOT 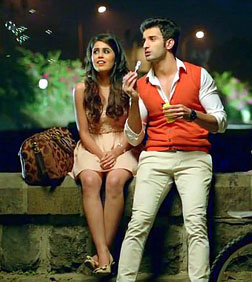 ADVERTISEMENT
This page was tagged for
Badmashiyaan hindi movie
Badmashiyaan reviews
release date
Suzanna Mukherjee, Sidhant Gupta
theatres list
Follow @fullhyderabad
Follow fullhyd.com on
About Hyderabad
The Hyderabad Community
Improve fullhyd.com
More
Our Other Local Guides
Our other sites
© Copyright 1999-2009 LRR Technologies (Hyderabad), Pvt Ltd. All rights reserved. fullhyd, fullhyderabad, Welcome To The Neighbourhood are trademarks of LRR Technologies (Hyderabad) Pvt Ltd. The textual, graphic, audio and audiovisual material in this site is protected by copyright law. You may not copy, distribute, or use this material except as necessary for your personal, non-commercial use. Any trademarks are the properties of their respective owners. More on Hyderabad, India. Jobs in Hyderabad.