Snow White And The Huntsman Review 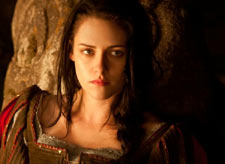 Samrat Sharma / fullhyd.com
EDITOR RATING
5.5
Performances
Script
Music/Soundtrack
Visuals
7.5
3.5
7.0
8.0
Suggestions
Can watch again
No
Good for kids
No
Good for dates
Yes
Wait to rent it
Yes
Snow White And The Huntsman starts off with a really promising take on the whole mythology, giving the evil queen a backstory, a motivation and a complex character. In this version, Queen Ravenna (Charlize Theron) is a woman wronged by a previous king, so she has no qualms about killing the present king and taking over his kingdom. She runs it using her powers to remain beautiful and immortal, a curse to her as she resents that a woman has to resort to them to command power.

The character has a strong motivation to be bad, and some complex psychological issues, playing the victim and being insane at the same time. Unfortunately, the film chooses to keep her bound to a castle for most of the running time, so she can't really affect the plot or move it forward.

That honour goes to Snow White (Kristen Stewart) - someone about whom we never learn why she was left alive for 8 years while Ravenna consumes young women in her kingdom. It is also never explained why she never attempts an escape before those 8 years. She does escape, however, and lands in the enchanted woods. Ravenna dispatches a surly widower huntsman (Chris Hemsworth) to hunt her down, with a promise to bring his wife back if he should succeed.

The film nosedives in interestingness, quality and originality from that point onwards, and remains a low-rent copy of the countless fantasy films you have seen before. When the reluctantly helpful huntsman, and Snow White, meet the dwarves and her childhood crush eventually, events come to a head, and you have an even more generic battle, and then good wins over evil.

It's shocking how much director Rupert Sanders steals from Princess Mononoke, Pan's Labyrinth, Lord Of The Rings, and every other fantasy film that had a battle sequence. It is generic and borrowed, and feels uninspired.

Worse, the imagery used in the film is not for any particular purpose - it is there simply because it looks cool. Nothing that is shown to us has any depth beyond the surface, keeping the film feeling thematically shallow.

Theron's Ravenna helps whenever she comes for a small snippet every now and then, chewing the scenery like a seasoned pro, but she isn't the point of the plot, so that is only enjoyable fluff. Stewart has 3 expressions - that of anger, awe and fear - which she uses throughout without a single change. She doesn't share any chemistry or on-screen charisma with Hemsworth, which leads to particularly strained sequences in the middle.

The Aussie has shown he can act, but he remains angry and confused throughout, leading me to think that is just a pay cheque he hopes to cash. Wasting top talent like the ones here on the angry dwarves is the biggest criminal act, however. These are all consummate actors, and the film barely gives them anything to do.

I cannot honestly recommend the film, but you could watch it for Theron's fun take on the character for the first half hour or so. It is certainly visually appealing in a standard music-video sort of way, so it's not a waste of money. Though it certainly is a waste of time and talent.
Share. Save. Connect.
Tweet
SNOW WHITE AND THE... SNAPSHOT
SNOW WHITE AND THE HUNTSMAN SNAPSHOT 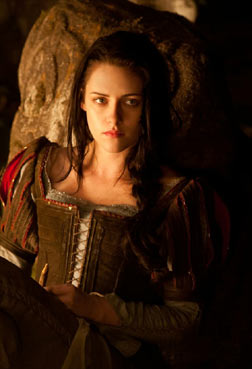 ADVERTISEMENT
This page was tagged for
Snow White And The Huntsman english movie
Snow White And The Huntsman reviews
release date
Kristen Stewart, Charlize Theron
theatres list
Follow @fullhyderabad
Follow fullhyd.com on
About Hyderabad
The Hyderabad Community
Improve fullhyd.com
More
Our Other Local Guides
Our other sites
© Copyright 1999-2009 LRR Technologies (Hyderabad), Pvt Ltd. All rights reserved. fullhyd, fullhyderabad, Welcome To The Neighbourhood are trademarks of LRR Technologies (Hyderabad) Pvt Ltd. The textual, graphic, audio and audiovisual material in this site is protected by copyright law. You may not copy, distribute, or use this material except as necessary for your personal, non-commercial use. Any trademarks are the properties of their respective owners. More on Hyderabad, India. Jobs in Hyderabad.