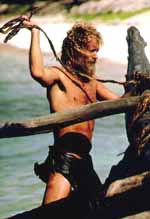 Feroz Hassan / fullhyd.com
EDITOR RATING
8.0
Performances
Script
Music/Soundtrack
Visuals
NA
NA
NA
NA
Suggestions
Can watch again
NA
Good for kids
NA
Good for dates
NA
Wait to rent it
NA
Remember the ad where the courier guys await Columbus in America with a package addressed to him? That says something about the brash confidence of these companies in delivering your package anywhere, anytime. So, imagine the professional embarrassment that FedEx employee Chuck Noland (Tom Hanks) has to endure when he is washed ashore an island with no address, with no clue for anyone to trace him. He, now, is a package that has to be delivered back to civilization, and who better than a FedEx agent (himself) to deliver it.

Gladly, the movie is not as shallow as that. As much a critique of the trappings of civilization as a celebration of the spirit of man, Cast Away presents Tom Hanks to us in all the dotty glory of Forrest Gump. Indeed, the Hanks-Zemeckis pairing looks to epitomize the single-minded resolve that looks to have been the mantra of the corporates in the '90s. But each time Zemeckis has taken the issue out of the bounds of the conventional. If in Forrest Gump it was a mentally challenged Forrest, then here it is a yuppie that has been thrown back into a scene that seems to be out of the Stone Age, with himself being its first denizen.

We are taken through the initial travails of Chuck as his resourcefulness is brought to the fore. But more than once, the desperation, the out-of-range feeling shows through. When he first screams for help, even his words seem to have no meaning. Need for communication drives him to make a face out of a football and speak to it. Then there are moments of 'discovery' and exultation, like when he makes fire, and then the mundane creeps in when, years later, even fishing with a spear becomes the quotidian.

Then, when he finally makes it back to Memphis, there is a sudden change of scene and where he would have been noticed by family and friends, he has to contend with the awe of the world. And there is his sweetheart, Kelly Frears (Helen Hunt), who couldn't wait for a 'dead' man.

The movie has only two things about it that make it a masterpiece - Tom Hanks' performance, and the overall concept itself. Here is an instance where you have a movie for a star, but the star himself doesn't precede the character. Instead, Hanks allows the character to overtake him. There is a thin line between the two and most of Hollywood is still on the wrong side of the line. If something's to be said for Indian movies on the issue, then it's that they are too far away from it to ever know it.

Finally, one wonders how many from our 'Survivor' era have a spirit that has not been blunted by modern tools and one that would help us survive such a situation. We never know till we do.
Share. Save. Connect.
Tweet
CAST AWAY SNAPSHOT

ADVERTISEMENT
This page was tagged for
Cast Away english movie
Cast Away reviews
release date
Tom Hanks, Helen Hunt
theatres list
Follow @fullhyderabad
Follow fullhyd.com on
About Hyderabad
The Hyderabad Community
Improve fullhyd.com
More
Our Other Local Guides
Our other sites
© Copyright 1999-2009 LRR Technologies (Hyderabad), Pvt Ltd. All rights reserved. fullhyd, fullhyderabad, Welcome To The Neighbourhood are trademarks of LRR Technologies (Hyderabad) Pvt Ltd. The textual, graphic, audio and audiovisual material in this site is protected by copyright law. You may not copy, distribute, or use this material except as necessary for your personal, non-commercial use. Any trademarks are the properties of their respective owners. More on Hyderabad, India. Jobs in Hyderabad.