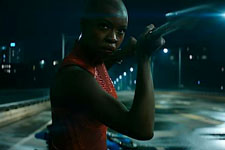 Punarvasu Pendse / fullhyd.com
EDITOR RATING
6.0
Performances
Script
Music/Soundtrack
Visuals
6.0
6.0
7.0
9.0
Suggestions
Can watch again
Yes
Good for kids
Yes
Good for dates
Yes
Wait for OTT
No
Marvel's plans for its new generation of superheroes continue, with some getting their own shows à la Ms Marvel, and some getting movie or TV series appearances, like Kate Bishop in Hawkeye. Riri Williams / Ironheart, introduced in Black Panther: Wakanda Forever, is soon going to get her own show. The film thus takes the past, the present and the future of the MCU, and tries to present it in one neat little package with interesting, albeit inconsistent, results.

Director Ryan Coogler is back at the helm to direct part two of the Black Panther franchise, this time facing the major dilemma of working without its lead and fan favourite, the titular Black Panther T'challa. Marvel made the decision to not recast the character after Chadwick Boseman's untimely death to colon cancer - and the whole film feels like a tribute to the original Black Panther.

T'Challa (Chadwick Boseman), the ruler of Wakanda, has passed away due to a mysterious illness that his sister Shuri (Letitia Wright) tried in vain to cure. With its talismanic king dead, Wakanda is under renewed international pressure to surrender their deposits of vibranium, with foreign powers believing that the internal instability has weakened the otherwise strong kingdom. Shuri and her mother Ramonda (Angela Bassett) have to deal with this situation while also having to deal with the threat of a vibranium detecting machine.

When it rains, it pours - Wakanda is almost on the verge of recovery when the kingdom gets threatened by a mysterious race of creatures that dwell underwater, with a king (Tenoch Huerta) who is rumoured to be a god. Without the Black Panther as their protector, Wakandans are forced to join a conflict they do not wish to be involved with, as the alternative is all-out war.

Black Panther: Wakanda Forever has its heart in the right place. After a long time, the MCU explores a storyline where there is genuine grief involved. The very first sequence in the film features the women in T'Challa's life - his mother, his sister and his trusted lieutenant Okoye (Danai Gurira) are all united in their grief as they mourn the king's death, and his former partner and Wakandan spy Nakia (Lupita Nyong'o) pours her heart out in a later scene.

It sets the tone for the film - quiet moments with mournful silence alongside song and dance to celebrate the life of their guardian protector. It is quite interesting to see the sequel of a billion dollar movie, not to mention its quarter billion dollar budget, written around women, and black women at that. Of course, it remains to be seen if it is indeed a step in the right direction, or a case of aiming too high too soon.

Despite Black Panther's earnestness, this is Marvel's second longest film after the era-defining Avengers: Endgame, and by far its most bloated offering. The movie, in fact, is all over the place - a great portrayal of grief and loss, an average but watchable plot, and some truly bizarre choices that could be completely omitted with nothing of value lost. Martin Freeman's entire role of CIA Agent Everett Ross feels extremely tacked on except for the last scene, as does the role of Julia Louis-Dreyfus as his boss and ex-wife Valentina Allegra de Fontaine (the latter at least had the excuse of being an introduction to future appearances). This is not a movie that can justify a 161-minute running time, and at times just makes you want it to hurry up.

Letitia Wright is a tad underwhelming in a lead role as Shuri, and Chadwick Boseman is sorely missed. Tenoch Huerta plays an interesting character, and his almost manic energy is intoxicating - you want to believe in his character's delusions. Lupita Nyong'o and Angela Bassett deliver powerful performances, and Danai Gurira and Winston Duke round up the characters we all know and remember. Dominique Thorn's Ironheart almost feels organically introduced, until the film decides to chuck it all aside and force her into the superhero role.

As we have often repeated, Marvel movies are visual spectacles, and Ludwig Göransson's music does justice to the impressive visuals. We get Latin-American futuristic vibes to complement African futuristic vibes, and the mournful periods of silence add a nice touch to the overall audio arrangement.

A decent watch for neutrals, and a surprisingly emotional experience for Marvel regulars, Black Panther: Wakanda Forever is a movie that shines in places but drags on in others. All things said, it introduces important future characters, and it marks the end of phase four. And onwards rolls the Marvel juggernaut into phase five, showing no signs of stopping. 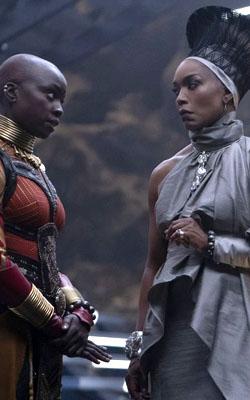 ADVERTISEMENT
This page was tagged for
Black Panther: Wakanda Forever telugu movie
Black Panther: Wakanda Forever reviews
release date
Letitia Wright, Lupita Nyong'o
theatres list
Follow @fullhyderabad
Follow fullhyd.com on
About Hyderabad
The Hyderabad Community
Improve fullhyd.com
More
Our Other Local Guides
Our other sites
© Copyright 1999-2009 LRR Technologies (Hyderabad), Pvt Ltd. All rights reserved. fullhyd, fullhyderabad, Welcome To The Neighbourhood are trademarks of LRR Technologies (Hyderabad) Pvt Ltd. The textual, graphic, audio and audiovisual material in this site is protected by copyright law. You may not copy, distribute, or use this material except as necessary for your personal, non-commercial use. Any trademarks are the properties of their respective owners. More on Hyderabad, India. Jobs in Hyderabad.