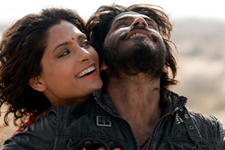 Jaiwantika Dutta-Dhupkar / fullhyd.com
EDITOR RATING
5.0
Performances
Script
Music/Soundtrack
Visuals
4.0
4.0
4.0
5.0
Suggestions
Can watch again
No
Good for kids
No
Good for dates
Yes
Wait for OTT
Yes
Mirzya is a contemporary take on the traditional Indian folktale of tragic lovers Mirza and Sahiban, and so it juxtaposes the old with the new in a refreshing way. It attempts a modern-day retelling of classic folklore, perhaps in an attempt to say that some stories never really die.

Suchitra (Saiyami Kher) is betrothed to a true-blue prince, Karan (Anuj Choudhary), and all seems well in their paradise, but she lusts after stable-hand Adil, who we're eventually told is her long-lost juvenile delinquent pal, Mohnish - the one who got sent away for shooting their schoolteacher, the one who loved Suchi to delinquency and dementia.

After some inconsequential capers involving horses and several song sequences involving Rajasthani street dancers, some night safari scenes with bad graphics and some make-out scenes totally bereft of chemistry between the lead pair, Suchi and Adil/Mohnish elope on her wedding day, only to be given hot pursuit by her father and her prospective in-laws. The film ends tragically for the lovers because Suchi, like Sahibaan, sabotages her lover's weapon, resulting in his death and her eventual suicide.

Tragic lovers aren't a cultural monopoly per se, and it's amazing how shockingly similar their stories are across time and cultures. There are Shakespearean references in this rather theatrical film, but they seem irrelevant and unnecessary appendages. Mirzya's eventual martyrdom at the hands of his sabotaging ladylove is intended to smack of class-conflict, and woman-hating is always a part of the game, but the death fails to draw enough sympathy. Maybe because Adil/Mohnish doesn't seem ardent enough. Suchitra seems more zealous about the relationship than he is, and her Prince Charming Karan is the most zealous of them all. Unfortunately there are no make-out scenes between Suchitra and her husband-to-be, so we only have our best guess about their chemistry. Theatrical films have always been an eyesore, and the melodrama in Mirzya can be too much to handle.

Both Saiyami Kher and Harshvardhan Kapoor make good debuts, although their dialogue deliveries are seriously below par and could do with improvement. Saiyami Kher actually looks better with blue contact lenses than she does without.

The film has some well-shot sequences, sometimes going OTT. It takes much creative liberty, depicting the traditional Mirza Sahiban folktale with a Scandinavian-style war sequence and Punjabi folk music playing in the background. The cinematography makes this a pleasant watch, and the action sequences have been choreographed well.

The movie makes do without the traditional songs and dances, but there are several folk songs choreographed in street style and they're peppered all through the narrative. The dancers take the place of the traditional narrator in a play, and offer their own perspective, even though you wonder at the necessity of it all.

Mirzya is like going to an upmarket joint to eat really fancy paani puri. It's fancy, but it's still paani puri.
Share. Save. Connect.
Tweet
MIRZYA SNAPSHOT 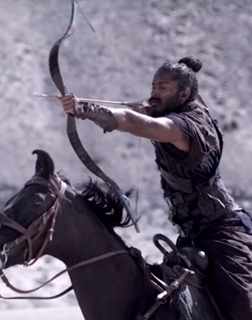 ADVERTISEMENT
This page was tagged for
Mirzya hindi movie
Mirzya reviews
release date
Harshvardhan Kapoor, Saiyami Kher
theatres list
Follow @fullhyderabad
Follow fullhyd.com on
About Hyderabad
The Hyderabad Community
Improve fullhyd.com
More
Our Other Local Guides
Our other sites
© Copyright 1999-2009 LRR Technologies (Hyderabad), Pvt Ltd. All rights reserved. fullhyd, fullhyderabad, Welcome To The Neighbourhood are trademarks of LRR Technologies (Hyderabad) Pvt Ltd. The textual, graphic, audio and audiovisual material in this site is protected by copyright law. You may not copy, distribute, or use this material except as necessary for your personal, non-commercial use. Any trademarks are the properties of their respective owners. More on Hyderabad, India. Jobs in Hyderabad.