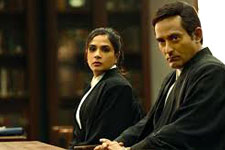 Punarvasu Pendse / fullhyd.com
EDITOR RATING
4.0
Performances
Script
Music/Soundtrack
Visuals
6.0
4.0
5.0
6.0
Suggestions
Can watch again
No
Good for kids
No
Good for dates
No
Wait for OTT
Yes
The morally ambiguous "grey areas" have been the playground of filmmakers for as long as we can remember. And Bollywood is getting sneakier and sneakier at that.

Section 375 is director Ajay Bahl's second outing since 2012, after the rather divisive BA Pass. And his second movie is going to split even more opinions, for sure.

Section 375 wastes no time on small-talk, and gets right to the story-telling right from the get go. Privileged, rich film director Rohan Khurana (Rahul Bhat) is accused of raping an assistant costume designer, Anjali Dangle (Meera Kapoor). A lower court finds him guilty and sentences him to ten years of imprisonment, which he plans to contest in the High Court.

Top lawyer Tarun Saluja (Akshaye Khanna) is appointed to fight to case on his behalf, pitted against rising public prosecutor Hiral Gandhi (Richa Chadda) - who also happens to have a working personal relationship with the experienced lawyer, having once worked in his chambers.

The second half is very different from the first, as the case is now personal for Saluja after negative press for his decision to defend an alleged rapist. Saluja leaves no stone unturned as he strives to prove that his client is not guilty. The film gets to the real courtroom drama as all pretences are shed, and the truth comes out. And, for better or worse, come out the aforementioned grey areas.

To be fair, Section 375 s a well-made film. The kind of courtroom drama that makes a reviewer wonder if he gave something away. There are some haunting shots which make you feel small and helpless about how much trauma inept officials put a victim of sexual assault through. Then there are the harrowing moments where an unempathetic cross-examination makes it appear like the victim is on trial.

None of this, however, takes away from the problems Section 375 has.

To put it lightly, it is an irresponsible film. Its entire "law vs justice" debate is deeply rooted in its own bias towards one of the parties shown in the movie, the scope of which extends well outside the movie theatre. Asking questions that involve these grey areas is of paramount importance, no doubt, but not by an individual who has already picked his side.

Take off the restraints, and I would straight up call it a defence of Bollywood's inherent sexism and misogyny, hidden under the garb of being "a film that makes you think". Section 375 is great at building up an atmosphere of presumed ambiguity, where it presents both sides of the argument clearly. And it does partially succeed at that, mind you, for the best part of the first half - facts are ably presented, evidence is clearly exhibited. But (and there's always a but), there are also facts that are outside what the story wants to tell you that are equally convincing. The defendant is a man and so is his counsel, and the plaintiff is a woman and is represented by one. "The online court of Twitter" is mentioned to be unfair to the accused, and the role of social media is said to be subversive. Supporters of women's rights are shown to be violent, and clash with the police outside the court; one even goes on to smear Saluja's face with black ink (the act of humiliation that brings about a distinct change in the way he goes about with his defence).

The primary reason for the spread of the #MeToo movement was the Internet, and it made it possible for women to speak out against powerful men. The movie taking slight digs at that, undermining the cause, and picking a side in its "law vs justice" argument is not just unsettling because of how sneaky it tries to be - frankly, in 2019, it is tiring.

Akshaye Khanna gets the best lines, and pulls them off as the lawyer who needs to be scummy for his client (I would like to have believed he is a good person otherwise, though the ending doesn't show much promise in that regard). Richa Chadda is the idealistic public prosecutor, but her inexperience is a little too off-putting - the script needed to do more for an actor of her level.

The fact that just looking at Rahul Bhat's face in the movie is enough to annoy you is testament to his capabilities. Meera Chopra is the least convincing of the cast, which is disappointing because of how important her character is (not that the script helped).

Clinton Cerejo's score is off-putting at times, but doing away with song and dance is a win for the movie. Overall, not much to complain about in the music department.

To quote (myself) from the very first movie I wrote about for fullhyd.com, "A lot of culture is made normative through film in today's world..." It is the same year, yet here we are. Bollywood generally leaves me with dim hopes where topics that need to be dealt with empathy and conviction are concerned, and Section 375 is another movie to add to that long list. 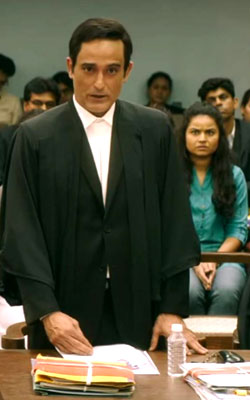 ADVERTISEMENT
This page was tagged for
filmyjilla
filmyjilla 1.com
Filmyjilla.in
section 375 movie full in hindi downtown
section 375 full movie filmyjilla
Follow @fullhyderabad
Follow fullhyd.com on
About Hyderabad
The Hyderabad Community
Improve fullhyd.com
More
Our Other Local Guides
Our other sites
© Copyright 1999-2009 LRR Technologies (Hyderabad), Pvt Ltd. All rights reserved. fullhyd, fullhyderabad, Welcome To The Neighbourhood are trademarks of LRR Technologies (Hyderabad) Pvt Ltd. The textual, graphic, audio and audiovisual material in this site is protected by copyright law. You may not copy, distribute, or use this material except as necessary for your personal, non-commercial use. Any trademarks are the properties of their respective owners. More on Hyderabad, India. Jobs in Hyderabad.