Kritika Deval / fullhyd.com
EDITOR RATING
5.0
Performances
Script
Music/Soundtrack
Visuals
6.5
3.0
4.0
4.0
Suggestions
Can watch again
No
Good for kids
No
Good for dates
No
Wait for OTT
Yes
So, the universe was being demolished by giant snakes which were trapped by goddess Ammavaru (Bhanupriya) who in turn trap her in a rock on an anonymous hill once every millennium (or whatever sounds more ominous). This, we are told by someone who wishes to commit an ancient version of land fraud a millennium back, is a trap that is broken when someone born under the simha rashi voluntarily burns to ashes in a fire that burns endlessly in front of her statue.

He still happily gulls the villagers into thinking that Ammavaru wants them out of those hills, and, after they are scared enough to leave on their own anyway, gets a bunch of goons to push them all from cliffs, presumably because he is an aficionado of the orchestra of the screams of doomed souls. Also, he wants the hills cleared out so he can grow marijuana there and sell it to kings.

This plot is foiled when quintuplet girls save the goddess via the ancient art of self-immolation, and for their sacrifice the girls are given goddess statues alongside that of Ammavaru. Following this, the goddess breaks free of her trap and kills the crook and his goons, and goes back to being a rock with eyes.

A millennium has passed, and once again evil must strike (in the form of a ball of fire from outer space that is born as a human, off a random woman, within 5 rather excruciating minutes) and must be vanquished (by a woman who likes to sing and to annoy farmers by messing with their work).

Evil takes another 5 minutes to grow from toothy infant that tore out of its mother's womb to little bear person to werewolf to Karkotaka (Satya Prakash). Meanwhile, the one who must vanquish it is Rajeswari aka Raji (Radhika), a village belle who is laughably alien to her rural surroundings.

And then starts a series of events so illogical we have to wonder if the dear goddess forgot to invent logic after all. We understand. Really. What with the galaxy-sized snakes roaming around in the universe trying to smash through planets (and somehow not causing a chain reaction of damage), and then getting the snakes onto the Earth to trap them (which somehow ends up in Her being trapped Herself).

The baffling lack of logic in the rest of the story is even more astonishing given that the film began with a complete denial of all laws of physics and the universe, as well as how cause-and-effect works, to start with. To beat that would take nonsense of humongous proportions, and the movie delivers.

So you have a hero, Prasad (Rishi), who is trapped in his house and given sweets laced with something that give him hallucinations, which, being the foreign-educated health-conscious strapping young lad that he is, he does not figure out at all. And you have a woman who is drowned in a well and then shows up completely unharmed to marry the hero. We get that she is under the protection of the goddess, but apparently the goddess made it so that none of it ever occurred.

The story has no reason to exist except to exhibit the graphic artists' ability to create tentacled monsters that are always vaguely sexual in nature. And, if you want a villain to combat with one of the most powerful entities in Hindu mythology, for heaven's sake, pick someone who can speak full sentences! We get that this is great progress for a 2-day-old, but naaku nachcha and naaku nachche growled in an adult baby voice don't quite make for super-villain-ish catchphrases.

The point is, for all of Arundhati's meaningless violence, its plot possessed coherence. Avatharam is an overhaul of the '90s style of devotional cinema in all the worst possible ways. "It's about gods" is not a good enough excuse to go on what seems to be a very pot-ridden attempt at screenwriting.

The performances are good, especially considering that everybody had to use exactly four expressions - enigmatic, evil, happy and sad. Radhika looks so very out of place that it took this writer a while to be sure that they were actually going to use her as the heroine.

The graphics obviously don't match up to their Western counterparts in any way, but even setting that aside, have been put to awfully disturbing uses. The music is strictly mediocre.

The biggest strength of Avatharam is that it is very difficult to stop watching it once you get into the theatre. It is our duty to stop you from ending up over there in the first place, and to tell you that, yes, God will forgive you for waiting to watch this one until it gets to the TV.
Share. Save. Connect.
Tweet
AVATHARAM SNAPSHOT 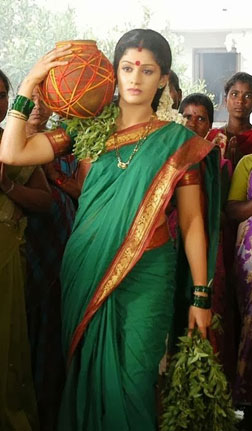 ADVERTISEMENT
This page was tagged for
the power avataram cast
avatharam cast
avatharam telugu movie
pawar of awtaram telgu movie actars name
avatharm
Follow @fullhyderabad
Follow fullhyd.com on
About Hyderabad
The Hyderabad Community
Improve fullhyd.com
More
Our Other Local Guides
Our other sites
© Copyright 1999-2009 LRR Technologies (Hyderabad), Pvt Ltd. All rights reserved. fullhyd, fullhyderabad, Welcome To The Neighbourhood are trademarks of LRR Technologies (Hyderabad) Pvt Ltd. The textual, graphic, audio and audiovisual material in this site is protected by copyright law. You may not copy, distribute, or use this material except as necessary for your personal, non-commercial use. Any trademarks are the properties of their respective owners. More on Hyderabad, India. Jobs in Hyderabad.