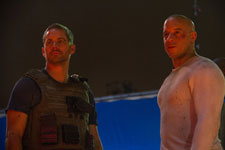 Nupur Barua / fullhyd.com
EDITOR RATING
7.0
Performances
Script
Music/Soundtrack
Visuals
6.0
6.0
6.0
8.0
Suggestions
Can watch again
Yes
Good for kids
No
Good for dates
Yes
Wait for OTT
No
Furious 7, or Fast & Furious Seven, has been in the news for many reasons over the past few months. It was during the production of this film that the charming Paul Walker lost his life, and the cast and crew took some time off to mourn his passing. While they did that, the makers of the film also had to figure out a way to complete the movie without the main lead, and they found a few solutions to make that happen. And last but not the least, the movie has a few surprise appearances, and that is one of the reasons you cannot miss it.

Dominic Toretto (Vin Diesel) and his crew have retired, from the time being, from their life of crime. Han is dead, and the mysterious phone call that Dom received is not yet forgotten. Agent Luke Hobbs (Dwayne Johnson), however, may have stumbled upon something when he comes face to face with a man named Deckard Shaw (Jason Statham). When Deckard tries to kill him, Hobbs manages to escape, badly hurt.

In the meantime, on a day that Dom gets a visit from his sister Mia (Jordana Brewster) and Brian (Paul Walker), and their son Jack, he also receives a parcel from Tokyo that blows up his entire house, but all of them escape unharmed.

Hobbs calls Dom to the hospital where lies bedridden, and tells him that Deckard Shaw is none other than Owen Shaw's elder brother, and that he is Han's killer. Deckard is obviously out to avenge Owen's death, and is like a shadow that sneaks up behind you.

Dom and his crew go out to Tokyo for Han's funeral. When Dom sees a mysterious car at the cemetery, he follows it, and comes face to face with Deckard. Deckard is about to shoot him when they are interrupted by an army of sorts, led by Frank Petty (Kurt Russell). Petty is the back-up support that Hobbs has arranged for Dom and gang, and before they know it, Dom, Brian, Roman (Tyrese Gibson), Tej (Chris Bridges) and Giselle (Michelle Rodriguez) are together again, on yet another mission.

The mission is to rescue the hacker Megan Ramsey (Nathalie Emmanuel) from the clutches of the terrorist Jakande (Djimon Hounsou). Megan has developed a tracking device that could be dangerous in the hands of Jakande, and useful for Dom's crew in tracking Deckard. The information for the tracking device is with Megan's friend (Ali Fazal) in Abu Dhabi, but he has sold it to a Jordanian prince. So the gang has to first rescue Megan, contact the friend, and then figure the plan forward, but Deckard is already on their trail.

The movie is a sequel to Fast & Furious 6, and continues where it left off. With the relationship between Hobbs and the gang veering towards positivity, the latter becomes less criminally-oriented. While their past is not exactly wiped clean, Dom, Brian, and crew now actually team up with the law to deliver justice. It may not sound very practical, but that is the graph that the franchise has developed over the years.

Also, with all their characters firmly etched in the annals of the Fast and Furious movies, this instalment does not offer introductions and explanations. It jumps right into the action, and that never stops. To be fair, it is an action movie, and the story is incidental, which is why the screenplay is rather simple, without twists or turns. It is a good guys versus bad guys film, and the outcome is predictable.

The dialogues are pretty staid, and the humour is a bit stale. You have to be tuned in to the previous movies of the franchise to understand the references the characters make to each other's personalities. Petty is the only one who appears witty, even when he spouts conventionally standard funny lines. Again, the plot is simple, with some complicated detours, but it all comes together in the end.

The minute the film begins, you are aware of the fact that Paul Walker is not going to be around for the next one. The plot has been manipulated to feed in the concept of his retirement from the action, and this is the last time he will be in this gang. Throughout the film, Dom keeps asking Brian if this is what he has been missing and if it is all worth it, now that he has a family to look after. Dom dominates the story, and Brian seems reluctant to do more than follow orders. A passive Brian may be a disappointment to fans of the franchise, but, as we mentioned earlier, it is necessary for the character to slowly fizzle out.

The movie delves into the relationship theme quite a bit. The past that Dom and Giselle share is referred to often, for example. As are the bonds between Brian and Mia, who is conspicuous by her long absences in the story. The gang consider themselves a family, and this, too, is appreciated by Hobbs and Petty. Loyalty is paramount to this group of people, and although the screenplay does not really call for a test, it is referred to a couple of times.

The friendship between Dom and Brian is mentioned in the end, with a touching tribute involving a friendly car race/drive between the two. As Dom points out in the end, no matter where Brian is, they will always be together in spirit. Since you know that this is a tribute to Paul Walker, you may become slightly emotional, especially if you have been following their story since the beginning (and even if you have not, there is a montage that gives you a glimpse of Brian's life since the first movie).

As expected, the film is full of action. Since there is only so much you can do with cars on the road, this time, they are made to fly out of planes and buildings. It becomes more and more surreal as the story moves ahead, and is almost fantastical by the time they reach the Etihad Towers in Abu Dhabi. The action sequences include car chases, a bus falling off a cliff, and Brian flying out of that falling bus.

The surprise item, though, is the appearance of Tony Jaa and his legendary martial arts. To give the makers credit, they never show Brian defeating Tony Jaa by displaying superior martial arts moves - not even the most diehard Paul Walker fan would believe that - but by using incidental intelligence. And where there is Tony Jaa, there is pure adrenaline - but unfortunately, not too much of it.

Vin Diesel and Dwayne Johnson both star in this movie. Enough said. Of course, both are not really known for their acting abilities, but it is fascinating to see them make an effort, very sincerely. Add to that Jason Statham, with his grimaces, and you have a trio of men who are strangely magnetic, and grab eyeballs, all without doing much.

Paul Walker is rather sedate in this film, but that has more to do with the fact that it is not really Paul Walker almost half the time. Michelle Rodriguez, Jordana Brewster, Tyrese Gibson and Chris Bridges do their bit with dedication, and almost blindfolded. The exciting appearances of Kurt Russell, Tony Jaa and Ronda Rousey add colour and life to the movie, but all of them deserve more screen time. As does Ali Fazal, whose Middle East accent is pretty convincing, and whose humour is the wittiest of the lot. Nathalie Emmanuel, best known for her role as Missandei in Game Of Thrones, is pleasant, and a welcome addition to the gang.

This time around, the production design concentrates more on live locations than sets. The film is shot in Los Angeles, Tokyo, the Middle East and other exotic locations, and the sweeping shots of various terrains are spectacular. Needless to say, the action sequences seem to be better shot, but the cinematographer has obviously had a great time shooting the entire movie. The idea of God's Eye, the tracking device that everybody runs after, is executed efficiently and explained well with visuals.

The high point of the movie is the CGI used on Paul Walker's stand-ins to recreate his role, and if you do not know about it, you will never guess which the real Paul Walker is and which is not. It helps that the stand-ins were the late actor's brothers Caleb and Cody, who resemble him very closely.

The 3D neither helps nor mars the movie experience, but some of the landscape shots look better in 3D. The editing is pretty much tuned to the way the director must have wanted the movie to shape up, but the final climax sequence is unbearably lengthy, and somewhat repetitive.

Fast and Furious 7 is a film that you must watch, primarily because of Paul Walker. Vin Diesel's final tribute is touching, and that establishes that although the franchise may carry on, we will never see Walker again. It is the end of an era, and it is time to say goodbye to the wonderful roller coaster ride that the movies have taken us on. 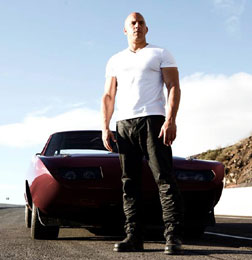 ADVERTISEMENT
This page was tagged for
furious 7 movie in hindi hd 720pgolkes
Fast and Furious 7 full movie in Hindi
the fate of the furious 7 full movie download in hindi
fast and furious 7 watch movie in hindi
fast and furious hindi 7
Follow @fullhyderabad
Follow fullhyd.com on
About Hyderabad
The Hyderabad Community
Improve fullhyd.com
More
Our Other Local Guides
Our other sites
© Copyright 1999-2009 LRR Technologies (Hyderabad), Pvt Ltd. All rights reserved. fullhyd, fullhyderabad, Welcome To The Neighbourhood are trademarks of LRR Technologies (Hyderabad) Pvt Ltd. The textual, graphic, audio and audiovisual material in this site is protected by copyright law. You may not copy, distribute, or use this material except as necessary for your personal, non-commercial use. Any trademarks are the properties of their respective owners. More on Hyderabad, India. Jobs in Hyderabad.