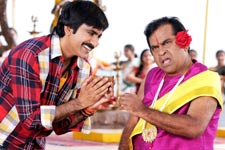 Deepa Garimella / fullhyd.com
EDITOR RATING
5.5
Performances
Script
Music/Soundtrack
Visuals
4.0
5.0
5.0
7.0
Suggestions
Can watch again
No
Good for kids
No
Good for dates
No
Wait for OTT
Yes
Vidya Balan, Nithya Menen and Rajamouli's Eega are some of the very few things noteworthy about Daruvu (to demistify that, Brahmanandam and a sidekick play dance teachers called Vidya Balan and Nithya Menen, respectively; and as for Eega, we were talking about both the trailer, and a little joke on Rajamouli's reincarnation fantasy plugged into the script). Much else of the film is a joke, mostly on you.

Oscillating wildly between the juvenile and the asinine, Daruvu is yet another of those assembly line Ravi Teja projects that seem to be competing for the "Director That Made Hero Scream The Loudest" award. Daruvu maker Siva may as well walk away with the accolades, since this is perhaps the most ear-splitting Ravi Teja has gone in a long, long time.

Bullet Raja (Ravi Teja) is a small-time crook in Chennai, who takes pride in his lawless ways. In another world, in Yamalokam, Chitragupta (M S Narayana) is plotting against the newly-crowned Lord of Death, the son (a scintillating Prabhu) of Yama (Kaikala Satyanarayana). Chitragupta decides to kill Bullet Raja before his time, because he knows that Bullet Raja would get livid with the gods of Death, if he finds out that he's been killed "by mistake" (and because it is common knowledge that Telugus are as dangerous a clan as they are nice, as evidenced by previous Telugu outings to Yamalokam, including those of NTR, Chiranjeevi and Jr. NTR).

Bullet Raja indeed arrives in Yama's abode, but is given a chance at life again, this time, in the body of AP's Home Minister Ravindra.

Daruvu does have some genuine moments of both comedy and melodrama. The makers, in a limited way, try to make this an engaging affair - there is some Yama-gola sprinkled in, there is a reincarnation element, and there is some dose of fun. In addition, the idea of a corrupt Home Minister changing his ways has been dealt with well, and the climax, despite being an extremely cheesy affair, stirs the right emotions in you.

But saddled as all of this is with generally poor execution, Daruvu just about scrapes past the watchability test by a whisker. There is a tiresome decibel level, and a terrible disregard for logic. The reincarnated Ravindra's good-natured deeds and "reforms" (like the episode of sending away all residents of an old-age homes to their children's homes) are pretty illogically and handled - the writers don't even try to make Ravindra a believable character, instead keeping him as comic-book-ish as is possible. Plus, scenes are hurled upon you rather than presented neatly.

That an otherwise bankable star is starting to be as much of a burden as he is an asset is something everyone here needs to think about. The fact that deserves notice is that Ravi Teja's brief but subdued act as the evil Home Minister has enough potential in it to merit a whole watchable film all by itself. While for the rest of the movie he is clowning around, it is in those few minutes that you remember that here is the kind of screen presence that is grossly abused and exploited by repetitive comedy. He's getting a little old for those characteristically rough ways with words and women, and it would be nice to see him do something suave now.

Vennela Kishore's comic timing is proving to be quite the replacement for aging comedians who are increasingly getting monotonous. Jayasudha's graceful act as Ravi Teja's mother is a picture of sanity in the proceedings. Sushant Singh makes for a competent villain, and Sayaji Shinde is quite funny. Raghu Babu's swami act draws in laughs. Meanwhile, Taapsee has nothing to do.

The music serves no purpose other than to extend the length of the movie. The visual effects are a little tacky, but that doesn't mean this is a low-cost production.

Daruvu is an exhausting movie to sit through, and it might be less of a challenge to watch it on the small screen.
Share. Save. Connect.
Tweet
DARUVU SNAPSHOT 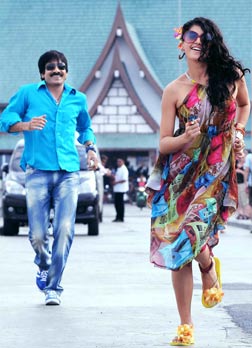 ADVERTISEMENT
This page was tagged for
daruvu full movie telugu ravi teja
Daruvu telugu movie
Daruvu reviews
release date
Ravi Teja, Tapsee
Follow @fullhyderabad
Follow fullhyd.com on
About Hyderabad
The Hyderabad Community
Improve fullhyd.com
More
Our Other Local Guides
Our other sites
© Copyright 1999-2009 LRR Technologies (Hyderabad), Pvt Ltd. All rights reserved. fullhyd, fullhyderabad, Welcome To The Neighbourhood are trademarks of LRR Technologies (Hyderabad) Pvt Ltd. The textual, graphic, audio and audiovisual material in this site is protected by copyright law. You may not copy, distribute, or use this material except as necessary for your personal, non-commercial use. Any trademarks are the properties of their respective owners. More on Hyderabad, India. Jobs in Hyderabad.