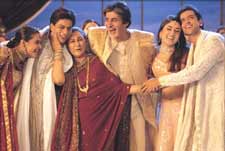 Smriti Kashyap / fullhyd.com
EDITOR RATING
6.0
Performances
Script
Music/Soundtrack
Visuals
NA
NA
NA
NA
Suggestions
Can watch again
NA
Good for kids
NA
Good for dates
NA
Wait to rent it
NA
Now here's a movie that has more stars than the American flag does, and is so imaginative that you could let your brains take a walk in the garden and return after an hour only to discover you didn't need them at all in the first place.

Unlike its rather promising title, Kabhi Khushi Kabhi Gham has just a little khushi and a great deal of gham. The flick takes lengths to new lengths, as we first deal with the ghastly long title and then, the ominous length of the flick - about 3 hours and 59 minutes.

The movie starts to assault our senses right from the word Kabhi. The Raichands are one big happy family, comprising of Pa Raichand (the Big B), Ma Raichand (Mrs. Big B), and betas Rahul (SRK) and soon to be 'Muscleflex Man' Rohan (Hrithik). They all live together in utter harmony in a house that seems to be the Parliament of some country. And when they are not hopping in and out of helicopters, they sing and dance in huge banquet halls with a certain Naina (Rani Mukherji), who Pa Raichand wants to make a bahu of the house.

But beta Rahul has plans of his own as he meets and falls in love with a girl from Chandini Chowk - the vivacious Anjali (Kajol). Like we all know, he marries Anjali against his father's wishes, and gets booted out of the house by Dad who wants to know exactly how this girl would be able to uphold the family's sanskaar, parampara and the rest of the soap tripe. Going by the movie, the only parampara that comes to rather vivid light is this partying business. Hell, anybody could, that. You don't need a master's in international business to know how to wear a ghaghra and prance about. That Big B is a bit too much to take.

Anyway, the family gets torn apart, and li'l brother Hrithik decides that it is up to him to get them all back again. That's the second half, of course. This is also when Kareena, Kajol's sister in the flick, begins to show up on screen with most of her clothes missing.

That's the movie, and the saddest part is that there isn't an iota of originality in the flick. Each bit of screen time seems to have been borrowed from some place else. If it isn't the same dumb huge house from a hajaar other movies, then it's the kids' studies in a 'Gurukul' (Mohabbatein, anyone?), and then that Kuch Kuch Hota Hai music and stuff, that dumb Sardar kid from KKHH, and the list goes on and on.

The film does have some great acting by Shahrukh, and like good wine, he seems to be getting better and much much sexier with age. His onscreen chemistry with Kajol is brilliant, and they sizzle till they can sizzle no more. Jaya Bachchan looks like her eyebrows were just electrocuted - but then she does a great job of the sad Ma and makes liberal use of the film's unending supply of glycerin. Big B as the patriarch of the family is good, but it looks like he shot the movie between his KBC shoots.

Kareena bares and unbares till we can bear no more, as she does an Alicia Silverstone from 'Clueless'. And Hrithik looks absolutely cute, sobbing, sobbing and sobbing some more. Check out his pictures on the film's official website - sobsobsob.com.

The film is huuuuuuge, in an elaborate sort of way. Director Johar seems to have gone to great lengths to ensure that there is ample coverage of the palatial house, the inbuilt helipad, some football fields and the 24x7 operational mandir, apart from the thirty odd people who always seem to be on screen. He also seems to have spent at least some thirty kilograms of Kumkum and Camphor - watch the flick to know what I'm ranting about. For chrissakes, cut us some slack, guys!

In sum, the film demands too much of your time and intelligence, and it should be made into a twenty part miniseries and aired on HBO, just so that we can digest whatever has been thrown our way.
Share. Save. Connect.
Tweet
KABHI KHUSHI KABHI GHAM SNAPSHOT

ADVERTISEMENT
This page was tagged for
kabhi khushi kabhi gham movie software
k3g film review in hindi
Kabhi Khushi Kabhi Gham hindi movie
Kabhi Khushi Kabhi Gham reviews
release date
Follow @fullhyderabad
Follow fullhyd.com on
About Hyderabad
The Hyderabad Community
Improve fullhyd.com
More
Our Other Local Guides
Our other sites
© Copyright 1999-2009 LRR Technologies (Hyderabad), Pvt Ltd. All rights reserved. fullhyd, fullhyderabad, Welcome To The Neighbourhood are trademarks of LRR Technologies (Hyderabad) Pvt Ltd. The textual, graphic, audio and audiovisual material in this site is protected by copyright law. You may not copy, distribute, or use this material except as necessary for your personal, non-commercial use. Any trademarks are the properties of their respective owners. More on Hyderabad, India. Jobs in Hyderabad.