The next movie in the East-meets-West, flied-lice-meets-homie-dawg series is a disappointment fellers. Confucius say "Ingesting piece of chicken, water, spices and vegetable not make Szechwan chicken in stomach". Looks like director maan didn't gain much gyaan from his knowledgeable Eastern action star Jet Li. But then, Mr. Li himself seems a little confused about concepts like gravity.

Tony Fait (DMX) is a jewel thief who pulls off some interesting heists with his loyal team of Daria (the gorgeous Gabrielle Union), Tommy (the funny Anthony Anderson) and Drag-On. He makes off with some 'black diamonds' (ever seen those, dawg?) and lots of huffing and puffing later, realizes he's got more baddies than the Bronx hot on his tail. Mr. Su (Jet Li) decides to drop into the party and kicks some ass just so we know he's there, and it becomes evident he too wants the rocks. 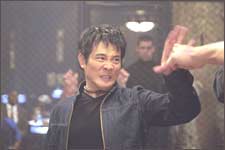 It's a little unclear at this stage who's good, who's bad and who's badder, so we wait with the now familiar 'Wha..??' look on our faces.

Okay, I give up. Here's what we've got. Su's a Taiwanese secret agent who has to retrieve the stones because they aren't what they seem. Tony is still... well... what he was; oh yeah, he's got an 8 year-old daughter. You just know she's gonna be kidnapped, dontcha' bro? Jan Chambers (Chi McBride) is da Big Dawg baddie who operates from jail and who also wants the stones. And yes, there's Su's former partner turned international arms dealer Ling (Mark Dacascos) also in the fray. Ling's gal, played by Kelly Hu, is real sweeeet y'all. Ya know wot I'm sayin'? 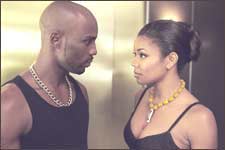 I'm sure the rest of the story's quite clear now. Tony's li'l gal gets kidnapped by Ling and that's the main driving force behind the whole movie! So Mr. Su and Tony tie hankies together, hold hands, go la la la into baddie land to pick some berries and kick some butt - peace and happiness.

The story is about as original as an omlette, the lethargic action would make a snail feel like a Ferrari and the whole thing is just too slow to be an exciting action flick. The story and screenplay by John O'Brien just fall flat. For example: Ling has Tony's daughter to get the stones from him. Ling gets them anyway from the jail Don, so why keep the girl till the very end? If anyone believed Li's anti-gravity antics in Romeo Must Die, they'll believe anything but the bad guy (not even the hero) walking away from a car that's been shot to bits and rolled over by a tank plus escaping unscathed from a copter that explodes in the air?? C'mon dude - even 4-year-olds would see through that!

DMX is as expressive as a doornail; Jet Li's improved his English and his acting and now seems to have a grasp of basic physical laws. For me, the best parts were those of Chambers, played by Chi McBride (also the princi in Boston Public), and Daria (hubba hubba!). Anthony Anderson does his thing.

So da Hong Kong homie did some flyin' around

And da bad-ass brotha kept his feet on da ground

Dey got his daughter and the man his stones

But the whole damn thing insults ya mind

Makes y'all feel like chumps, plays witch u time,

ADVERTISEMENT
This page was tagged for
Cradle 2 The Grave (English) english movie
Cradle 2 The Grave (English) reviews
release date
Jet Li, DMX
theatres list
Follow @fullhyderabad
Follow fullhyd.com on
About Hyderabad
The Hyderabad Community
Improve fullhyd.com
More
Our Other Local Guides
Our other sites
© Copyright 1999-2009 LRR Technologies (Hyderabad), Pvt Ltd. All rights reserved. fullhyd, fullhyderabad, Welcome To The Neighbourhood are trademarks of LRR Technologies (Hyderabad) Pvt Ltd. The textual, graphic, audio and audiovisual material in this site is protected by copyright law. You may not copy, distribute, or use this material except as necessary for your personal, non-commercial use. Any trademarks are the properties of their respective owners. More on Hyderabad, India. Jobs in Hyderabad.