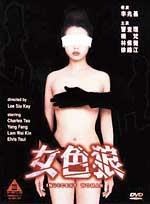 Ajay Bhashyam / fullhyd.com
EDITOR RATING
3.0
Performances
Script
Music/Soundtrack
Visuals
NA
NA
NA
NA
Suggestions
Can watch again
NA
Good for kids
NA
Good for dates
NA
Wait to rent it
NA
Yes! The poster on the walls and the movie screening are the same; the title is relevant to the story; there is a story (thank God!) and you don't come out of the theater feeling like you wasted good money. I think that makes for all that you can ask for from semi-porn flicks in town.

The story is about an Emilia apologizing to her husband Charles for having an affair and explaining to him how she never really wanted to and how it just 'happened'. Sure, we've all heard that before, but this time, somehow, the story seems plausible.

Emilia wants to sell her mother's old house and Leon is a prospective buyer. He's an intriguing chap, and in a way that is very difficult to describe in words, manages to seduce Emilia. According to Leon, they are playing a game where each person tells the other about their thoughts and fantasies and the game can be stopped anytime by just saying 'stop'. Emilia is hesitant and refuses to accept her feelings at first, but eventually gives in and becomes a total nymphomaniac lusting for Leon's body. The process is gradual and pretty interesting to watch.

Soon Charles comes to know, and the marriage is in trouble. Emilia gets progressively more and more desperate till Leon has her totally in his power. Then, he asks her to say that she loves him. The spell is broken because Emilia realizes that she doesn't, and that she truly loves Charles; that Leon was just for physical pleasures. Leon gets obsessive, and in a very short climax, the affair ends.

Emilia is shown to be trying to clear the misunderstandings and convince Charles of her love for him, and thus there is a background narrative in her voice. The film is either dubbed from another language or the English dubbing is really bad The actress playing Emilia is good and so is the guy playing Leon. The direction is excellent, but the sound quality isn't, and that spoils things. The titillation is very classy - not the cheap vulgar sex you usually get to see (or not see, as is usually!). Porn flicks usually get a 1 rating but this goes higher for the concept, direction and story telling.
Share. Save. Connect.
Tweet
INDECENT WOMAN SNAPSHOT

ADVERTISEMENT
This page was tagged for
Full synopsis film The indecent woman
indecent woman 1999
movie the indecent woman
Indecent Woman english movie
Indecent Woman reviews
Follow @fullhyderabad
Follow fullhyd.com on
About Hyderabad
The Hyderabad Community
Improve fullhyd.com
More
Our Other Local Guides
Our other sites
© Copyright 1999-2009 LRR Technologies (Hyderabad), Pvt Ltd. All rights reserved. fullhyd, fullhyderabad, Welcome To The Neighbourhood are trademarks of LRR Technologies (Hyderabad) Pvt Ltd. The textual, graphic, audio and audiovisual material in this site is protected by copyright law. You may not copy, distribute, or use this material except as necessary for your personal, non-commercial use. Any trademarks are the properties of their respective owners. More on Hyderabad, India. Jobs in Hyderabad.