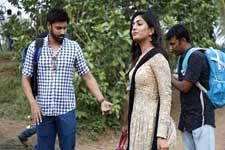 Sonali Dabade / fullhyd.com
EDITOR RATING
5.0
Performances
Script
Music/Soundtrack
Visuals
5.0
5.0
4.0
5.0
Suggestions
Can watch again
No
Good for kids
No
Good for dates
No
Wait to rent it
No
After having a less than stellar reboot to his career in Malli Raava, you would expect Sumanth to choose a well-written story this time around. But unfortunately Subrahmanyapuram looks to be another failed outing for the actor, which is doubly disappointing given that it managed to pique the interest of the movie-goers with its promos.

Centuries ago, an asteroid struck a sleepy little outpost of King Ravi Verma, and when the dust settled, a statue of Lord Subrahmanya Swamy was revealed. Ravi Verma got a temple built for the statue, and around it cropped up a village named after the deity that worshipped Him to no end.

Years later, however, when Narendra Verma (Suresh), a descendant of the ancient king, is presiding over Subrahmanyapuram, a forbidden abhishekam of the deity takes place, resulting in a slew of suicides that force the people to think of leaving the village for other pastures. One thing in common is that every person who committed suicide claims that the deity is calling to him through a letter written in an ancient language. Witnesses also claim that the appearance of a phantom peacock is responsible for a person to lose his mind and kill himself.

Kartik (Sumanth) is an archaeologist who is working on trying to find out more about the presence of God by researching temples across the country. One of these temples is the one in Subrahmanyapuram. After getting acquainted with Priya (Eesha Rebba), the daughter of the village headman, Kartik, along with his best friends, ends up in Subrahmanyapuram to ask for the headman's permission for further research.

Kartik's visit and his consequent investigation results in the opening of a can of nasty worms. With everyone being slowly drawn in to the power that the deity exudes, whether or not they will be able to save themselves forms the rest of the story.

The main problem with the film is that the script is flimsy with no strong reasoning behind many of the events in there. Every once in a while you think that something big is coming your way, but when the answers come, they don't wow you or make you gasp in wonder. It also needs plenty of credulity to believe that the family secret, something that the headman should have known, lies concealed despite everything going on now, because the ancient king made a pact with his minister not to reveal it to anyone. And because of this, the entire movie becomes a house of cards that's on the brink of tumbling down upon itself.

Also, while the issue of the suicides is a sad one, repetitively showing them on screen becomes tedious after a while. Sumanth's portrayal of a man wanting to fight to reveal the truth also meets the same fate, because there's only so many times you can hear "give me time, I'll prove it".

However, despite the premise being rickety and the end inadequate, what's coming is unpredictable, and that's a plus for the movie.

Times have changed since Godavari, and so has Sumanth's choice of films, it seems. He is stoic throughout the movie and doesn't have much to do, and even in the scenes that he does, is barely impressive. Eesha Rebba, post Awe, has leveled down a little, and this is not a patch on that dream character. Kartik's best friend Malli, played by Josh Ravi, is the best performance in the movie, and provides the necessary comedy in a drab fare. There's no one else in the starcast with a role that stands out.

The music and the background score are forgettable. While the cinematography works to a certain level, all this wannabe supernatural thriller gives you in terms of thrills are a few jump scares that even a scaredy cat like me wasn't bothered by. Watch this one only if you've watched everything else in town and on all the apps you have memberships with.
Share. Save. Connect.
Tweet
SUBRAHMANYAPURAM SNAPSHOT 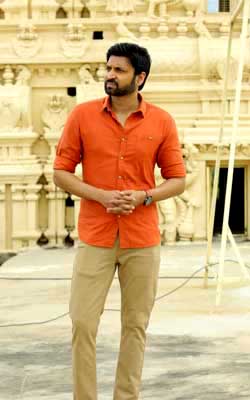 ADVERTISEMENT
This page was tagged for
Subrahmanyapuram telugu movie
Subrahmanyapuram reviews
release date
Sumanth, Eesha Rebba
theatres list
Follow @fullhyderabad
Follow fullhyd.com on
About Hyderabad
The Hyderabad Community
Improve fullhyd.com
More
Our Other Local Guides
Our other sites
© Copyright 1999-2009 LRR Technologies (Hyderabad), Pvt Ltd. All rights reserved. fullhyd, fullhyderabad, Welcome To The Neighbourhood are trademarks of LRR Technologies (Hyderabad) Pvt Ltd. The textual, graphic, audio and audiovisual material in this site is protected by copyright law. You may not copy, distribute, or use this material except as necessary for your personal, non-commercial use. Any trademarks are the properties of their respective owners. More on Hyderabad, India. Jobs in Hyderabad.