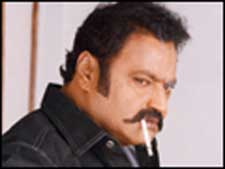 Mithun Verma / fullhyd.com
EDITOR RATING
5.0
Performances
Script
Music/Soundtrack
Visuals
NA
NA
NA
NA
Suggestions
Can watch again
NA
Good for kids
NA
Good for dates
NA
Wait to rent it
NA
He's back! And he's bigger than ever! After his stupendous performance last time, everybody was expecting him get even better this time. Heck, anyone could only get better from there. And here he is - thicker in moustache, stronger in dialogue and deadlier in expression. Ah, Rajeev Kanakala is a natural actor. But this movie is as much about him as about Hari Krishna. Let's get to him first.

Swami (Hari Krishna) is an innocent villager. This we know when he asks the taxi driver innocently whether those tall concrete structures on the road were buildings or not. No, son, they're not buildings. They're very, very tall humans. Their fathers had a thing for chimney ducts, you see. Sheesh, so much innocence can be dangerous in the city, you know.

For once we turn out to be right. Swami and his wife (Meena) do turn out to be dangerous. Suddenly, Swami makes the taxi guy to stop the cab. Then he bludgeons the taxi driver with a crude rock while his wife cheers him on delightedly. And thus Swami arrives! Swami - the man who proves that sticks and stones can break your bones, and stones will especially land you in a terrible make-up job.

Swami now announces that he's going to kill a lawyer, a doctor, a club owner and a politician. Okay, so everybody in the world wants to kill lawyers, doctors and politicians, but a club owner? There has to be something more to this than plain hatred. That's the cue for you, Mr. Flashback. Come and do your thing.

Swami and his wife were innocent villagers. Not much has changed of course, but they were also happy villagers back then. The reason for their happiness - Swami's sisters - Siamese twins, Sita and Gita. They were the two eyes of Swami. He even makes them wear the same clothes and jewellery to this effect. Meena gives up her chances of motherhood for them.

Not her fault. Who would want to have more children when you already have two kids in the house that look run around you, sing songs, giggle and play with stuffed parrots? The real reason, however, is the usual filmi one, if Meena had children, there might be a possibility of her ignoring these two darlings. So, no children. Good for the country, too.

When Sita and Gita go to study in a medical college, they meet Rajeev Kanakala. In a role that might give him more impetus than the one he played in Student No. 1, Rajeev does the typical jerk act. He takes advantage of both the sisters, uses them for his lecherous pleasures and kills them. His dad and the rest of the baddies help him. And the court lets them go Scot free.

So now Swami is wreaking his vengeance. Where the movie lacks in originality, it makes up with some cool action sequences and some impressive con games the hero plays to deceive the court. There's also a message pleading the courts to pass judgements based on the truth rather than on evidence.

This has to be the best performance of Hari Krishna till date, while Meena and Aamani (in an insignificant role as the medical college principal) have seen better days.

ADVERTISEMENT
This page was tagged for
swamy telugu movie story in English
harikrishna swami movie wikipidia
swami 2 movie review
swami movie in telugu
Swami telugu movie 123 Rewus
Follow @fullhyderabad
Follow fullhyd.com on
About Hyderabad
The Hyderabad Community
Improve fullhyd.com
More
Our Other Local Guides
Our other sites
© Copyright 1999-2009 LRR Technologies (Hyderabad), Pvt Ltd. All rights reserved. fullhyd, fullhyderabad, Welcome To The Neighbourhood are trademarks of LRR Technologies (Hyderabad) Pvt Ltd. The textual, graphic, audio and audiovisual material in this site is protected by copyright law. You may not copy, distribute, or use this material except as necessary for your personal, non-commercial use. Any trademarks are the properties of their respective owners. More on Hyderabad, India. Jobs in Hyderabad.