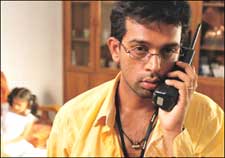 Deepa Menon / fullhyd.com
EDITOR RATING
1.0
Performances
Script
Music/Soundtrack
Visuals
NA
NA
NA
NA
Suggestions
Can watch again
NA
Good for kids
NA
Good for dates
NA
Wait to rent it
NA
If there's one basic rule of story-telling, it is that you must let the tale unfold in your listener's mind. This is especially the case with thrillers. Anybody from the master of suspense to your brother who narrates all ghost stories holding a torch under his face will tell you that the real thrill is in the anticipation. In the time that it takes for a doorknob to turn, for the rusty hinges to creak slowly open, and the shadows on the wall to spring alive, your mind takes a trip of its own. It opens the door a million times in that fraction of a second, and a million times it finds terrors too great for the imagination to name. By the time the much-anticipated Boo! actually happens, you are sweating in your seat, clutching at the armrest, and suddenly discovering that you do know all the words to the Hanuman Chalisa. Now that is the reason we go to the movies.

With Madhyanam Hatya, however, you're better off watching the trailers and letting the suspense happen in the quiet, (relative) sanity of your own head. Because the movie sucks so damn bad, you'll wonder why you still keep buying into that label which says 'A Factory Product'. This one should be returned for a full refund.

Ravi Kumar (Chakri) has the naggingest wife in the world. She doesn't even need a reason to bite his ear off, but when he starts spending more time at office, she assumes he's getting it on with his nubile intern. One day as she's steadily working herself up to another screeching crescendo, hubby dearest beans her on the head with a brass vase. Unable to think of a fittingly acerbic reply, she dies. After he's mopped up the demure puddle of blood, and stuffed her into a Samsung TV carton - subtle brand placement there -, Ravi drops her in a lake outside city limits. Yup, the hoenymoon's definitely over.

The police are onto him quickly enough, and soon they even get on the trail of the nubile intern (which, btw, did good business at Lamba). It is this girl's car that Ravi uses to transport his wife to her final, watery abode. As he and his unsuspecting accomplice in crime, the intern, run away from the law, Ravi shoots a cop, and the girl kills her boyfriend. It's surprisingly simple to kill people in this flick. One good thump on the head with any store-bought curio can do it. The remainder of the film is a thrilling chase sequence that will make you laugh until you stop laughing.

To get the best out of Madhyanam Hatya, take a cue from the characters of the film, and carry a brass vase to the cinema. Go ahead, knock yourself out.

See Madhyanam Hatya full details
MADHYANAM HATYA USER REVIEWS
1 - 3 OF 3 COMMENTS
POSITIVE  |  NEGATIVE |  NEWEST  |  OLDEST  |  MOST HELPFUL  |  LEAST HELPFUL
USER RATING
4.2
16 USERS
Performances
Script
Music/Soundtrack
Visuals
NA
NA
NA
NA
Can watch again - NA
Good for kids - NA
Good for dates - NA
Wait to rent it - NA
anji kumar on 31st Dec 2016, 11:12am | Permalink
pls anybody upload the movie madhyanam hathya. this is really good thriller movie pls anybody upload
Akbar Rahaman on 7th Nov 2012, 12:57am | Permalink
Hello Deepa,
The review posted by you ., looks as dumb as people looking for pleasurable life in Sahara.
The comments you wrote for the film is very amature., It makes me belive that you got no sense on the Art.
Here's what "Madhyanam Hathya" is known for - It's a story of a common man or may be your next door neighboor or (someone close to you) caught in unsually usual circumstances., like accidentally murderring his wife in a Apartment crowded with people and in broad day light. And the movie depicts what the common man will do from escaping the crime he does not intended to commit.
The movie ends by twisting viewers mind and gasping them thinking if the murder he commited was intentional., thats how the Afternoon thriller ends. Well it takes some creative genious to make an Usal story unusally intresting and thats what Ram Gopal Varma did..
I do hope in your next review you do see the art in such stories.

ADVERTISEMENT
This page was tagged for
Madhyanam hathya telugu full movie download
madhyanam hatya telugu full movie watch online free
madhyanam hatya telugu full movie watch online
Madhyanam Hatya telugu movie
Madhyanam Hatya reviews
Follow @fullhyderabad
Follow fullhyd.com on
About Hyderabad
The Hyderabad Community
Improve fullhyd.com
More
Our Other Local Guides
Our other sites
© Copyright 1999-2009 LRR Technologies (Hyderabad), Pvt Ltd. All rights reserved. fullhyd, fullhyderabad, Welcome To The Neighbourhood are trademarks of LRR Technologies (Hyderabad) Pvt Ltd. The textual, graphic, audio and audiovisual material in this site is protected by copyright law. You may not copy, distribute, or use this material except as necessary for your personal, non-commercial use. Any trademarks are the properties of their respective owners. More on Hyderabad, India. Jobs in Hyderabad.