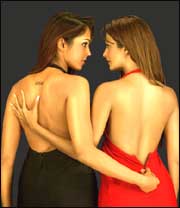 Deepa Menon / fullhyd.com
EDITOR RATING
1.0
Performances
Script
Music/Soundtrack
Visuals
NA
NA
NA
NA
Suggestions
Can watch again
NA
Good for kids
NA
Good for dates
NA
Wait to rent it
NA
Okay, so nobody was expecting the film Girlfriend to be mature. Or thought-provoking. Or even tolerable. All we expected from the movie was smut. And it doesn't even deliver that. History will always remember Razdan (perpetuator of Hawas) for his ability to make the most asexual movies about sex.

Girlfriend may not contain anything X-rated, and its so-called steamy scenes are so funny that you'll choke on your popcorn, at which point you'll notice that even the Heimlich maneuver is sexier than what's happening on screen.

The story falls apart something like this. Tania (Isha Koppikar) is a kick-boxer, motorcyclist and awkward jogger, who hates men and dotes over her only friend in the whole world, Sapna. While Tania is super jock and more in touch with her 'masculine side', Sapna is just plain dumb. We're not kidding, this is the sole focus of her character - unblinking stupidity. A consummate portrayal by Amrita Arora.

The girls live together and are very close. While Sapna (the stupid one) only sees Tania as a dear, good friend who she once slept with in college, Tania has other ideas. Tania realizes that she's in love with her friend, and that she (Tania) is actually a boy (also Tania) trapped in a girl's (i.e. Tania's) body. This, by the way, is the enlightened filmmaker's definition of a lesbian.

Apparently no one is aware of these 'feelings' till Rahul (Ashish Chowdhry) steps into the scene. Rahul falls madly in love with Sapna (still stupid), and the only thing that comes between them is a jealous girlfriend who can kick his ass. And his friend's ass, and the ass of some man in a parking lot.

But tough as she is (and she is tough, you can tell because of the leather gloves), Tania can do nothing to stop Sapna and Rahul from being drawn to each other like a moth to another moth. So she's frustrated (Tania, not Sapna. Sapna is stupid) and tries to win her friend back by eliminating Rahul. This she decides to do by making him believe that the two girls are lovers.

The only way that Sapna (el stupido) can be convinced to get into bed with Tania is by getting her drunk. So they get drunk, gaze at each other with lustful eyes (either that or they're about to sneeze) and proceed to look very turned on for no reason apparent to anybody in the theater.

The trick works and Rahul is almost driven away. But finally Sapna (le stupide) sees that Tania is, apart from being lesbian, also a raving lunatic. She recognizes this instantly when she sees Tania covered in her boyfriend's blood and smiling. Something is not quite right, she thinks (not really). But it's too late.

So does Rahul escape death? Does Tania win her girlfriend's heart? Does Karan Razdan know filmmaking from a hole in the ground? It doesn't really matter, everyone's gone home.
Share. Save. Connect.
Tweet
GIRLFRIEND SNAPSHOT

ADVERTISEMENT
This page was tagged for
Girlfriend hindi movie
Girlfriend reviews
release date
Isha Koppikar, Amrita Arora
theatres list
Follow @fullhyderabad
Follow fullhyd.com on
About Hyderabad
The Hyderabad Community
Improve fullhyd.com
More
Our Other Local Guides
Our other sites
© Copyright 1999-2009 LRR Technologies (Hyderabad), Pvt Ltd. All rights reserved. fullhyd, fullhyderabad, Welcome To The Neighbourhood are trademarks of LRR Technologies (Hyderabad) Pvt Ltd. The textual, graphic, audio and audiovisual material in this site is protected by copyright law. You may not copy, distribute, or use this material except as necessary for your personal, non-commercial use. Any trademarks are the properties of their respective owners. More on Hyderabad, India. Jobs in Hyderabad.