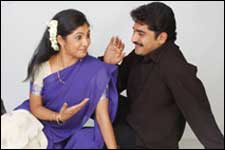 Priyanka Pulla / fullhyd.com
EDITOR RATING
5.0
Performances
Script
Music/Soundtrack
Visuals
NA
NA
NA
NA
Suggestions
Can watch again
NA
Good for kids
NA
Good for dates
NA
Wait for OTT
NA
The story of the strong woman standing up against dowry evils is germane alright, but does it still have the capacity to engross and entertain? Probably so, if someone sticks to it. But Meenakshi isn't about dowry evils entirely, nor is it about romance. It is about one strong, beautiful woman who inspires blind adoration in many men. Meenakshi is an ode to her.

Now if Meenakshi really had to hold fort for the next hundred days in the theater, she would have to be someone else. Not a petite, harmless, honeyed cherub like Kamalini Mukherjee, but someone more towering and grave. If she teeheed a little less and showed more pluck before the moment of reckoning, well, then she would be some she-stuff! And Meenakshi might make another Damini.

But we are just speculating. Who knows what would have made this movie tick? All we know is that it is funny, has a cogent story, and decent acting by the cast, but gestalt, it lacks the punch. And movies are one enterprise where it is the elusive X-factor that counts much much more than any constituting brilliance. So Meenakshi goes home with her satchel at the end of the day, without making any impact at all. She is an ordinary school-girl, and we couldn't care less.

As for the story, Meenakshi is a pretty, homely girl living in a village with her maavaiah, Sitaram (Sivakrishna), when Nandu (Rajiv Kanakala) descends from the city and steals her heart. Their wedding is underway when Nandu's mother and sister bring the monkey wrench in the form of abominable dowry demands. Nandu doesn't know, but by the time he does, he has inadvertantly critically injured Minni's beloved maavaiah, and then of course the fairy-tale wedding is out.

Another mysterious guy moves into her life with the alacrity of a passenger looking for a seat in an RTC bus. He gets busy with wooing Minni, and we go through the whole routine again. Who will get our wench in the end is anybody's guess. The humor is quite satisfying, but overall, the feel of the movie is as wholesome and hale as a "paadi pantalu" program on Telugu Doordarshan. As boring, too, we needn't add. The music by Prabhu fits into the theme very well, although the dance costumes look a tad outdated.

This is hardly the kind of movie you would call entertainment, and we can assure you, you do not belong to the target audience. Kamalini might yet come back with another Anand, but Meenakshi is not going to be in demand for quite a while.
Share. Save. Connect.
Tweet
MEENAKSHI SNAPSHOT

ADVERTISEMENT
This page was tagged for
Meenakshi Telugu movie
Meenakshi telugu movie
Meenakshi reviews
release date
Rajiv Kanakala, Kamalini Mukherjee
Follow @fullhyderabad
Follow fullhyd.com on
About Hyderabad
The Hyderabad Community
Improve fullhyd.com
More
Our Other Local Guides
Our other sites
© Copyright 1999-2009 LRR Technologies (Hyderabad), Pvt Ltd. All rights reserved. fullhyd, fullhyderabad, Welcome To The Neighbourhood are trademarks of LRR Technologies (Hyderabad) Pvt Ltd. The textual, graphic, audio and audiovisual material in this site is protected by copyright law. You may not copy, distribute, or use this material except as necessary for your personal, non-commercial use. Any trademarks are the properties of their respective owners. More on Hyderabad, India. Jobs in Hyderabad.