The Story of Us Review 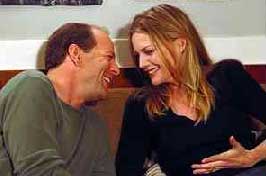 Feroz Hassan / fullhyd.com
EDITOR RATING
6.0
Performances
Script
Music/Soundtrack
Visuals
NA
NA
NA
NA
Suggestions
Can watch again
NA
Good for kids
NA
Good for dates
NA
Wait to rent it
NA
Two big-time actors and one successful director have together chosen to have a good time by playing out one familiar, yet pleasing theme. The result is a zero-stress, few tears film, with a few laughs for an experience - for the audience, that is.

Sticking to the feel-good theme of his last flick - The Tin Cup - Rob Reiner has come up with a movie that says "we are fooling no one, not even ourselves." What does that mean, you ask. It means that no one was really serious about this flick. That is not to say that it doesn't entertain, but it does so without any pretensions. Even if there are any, the actors seemed to be more than aware of it.

Katie and Ben Jordan are the perfect couple, and their two children complete their perfect family. The thing is that it is a little too perfect to begin with, and eventually ceases to be perfect at all. When their two kids leave for their summer camp, Katie and Ben decide to stay apart, and get used to the idea of it. You see, they are a little tired of keeping up the pretence for the kids' sake.

But no sooner do they split, than their longing for each other is rekindled. But their old selves show up only intermittently, and a patch-up seems more difficult than ever, until it actually happens - just in the nick of time, as it always does.

The narration of the plot, alternating between the good, the bad and the ugly times - in other words, the past perfect, the past imperfect and the present continuously imperfect - keeps the smile on your face with some admittedly silly incidents. You have some characters discussing sundry body parts with all seriousness, but in an amazingly unabashed manner. Then there is the couple itself, which is struggling to get a conversation going, and once they get it going, they can't stop shouting at each other.

Bruce Willis and Michelle Pfeiffer appear to be parodying themselves, going by their smirks and the decibel levels of their voices. I am sure that they all knew it, and enjoyed it. For us, it is mildly amusing, and never really irritating. Even if you begin to get annoyed, take a cue from the performers themselves. Don't take it seriously!

As for Rob Reiner, he must have surmised that the audience did not have very many tears left, so he took the tears out of Kramer and Kramer and made this flick. But he better get back to doing things a little differently, before the audiences start to take him less seriously than they should. This time around, he just passes muster.
Share. Save. Connect.
Tweet
THE STORY OF US SNAPSHOT

ADVERTISEMENT
This page was tagged for
us english movie review
The Story of Us english movie
The Story of Us reviews
release date
Bruce Willis, Michelle Pfeiffer
Follow @fullhyderabad
Follow fullhyd.com on
About Hyderabad
The Hyderabad Community
Improve fullhyd.com
More
Our Other Local Guides
Our other sites
© Copyright 1999-2009 LRR Technologies (Hyderabad), Pvt Ltd. All rights reserved. fullhyd, fullhyderabad, Welcome To The Neighbourhood are trademarks of LRR Technologies (Hyderabad) Pvt Ltd. The textual, graphic, audio and audiovisual material in this site is protected by copyright law. You may not copy, distribute, or use this material except as necessary for your personal, non-commercial use. Any trademarks are the properties of their respective owners. More on Hyderabad, India. Jobs in Hyderabad.