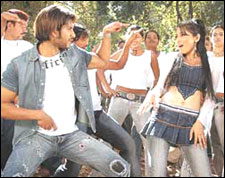 EDITOR RATING
3.0
Performances
Script
Music/Soundtrack
Visuals
NA
NA
NA
NA
Suggestions
Can watch again
NA
Good for kids
NA
Good for dates
NA
Wait to rent it
NA
If you thought Teja’s worst was yet to come, you’re perhaps mature. If you think nothing will ever be Teja’s worst, you’re perhaps enlightened.
With Oka V Chitram, Teja shows again how little he cares for thought and logic in films. In Nuvvu Nenu and Jayam, Teja gambled on the fact that Telugu audiences do not ask questions about how a hero wins, as long as he wins. When in doubt about that, think of that scene in Jayam where the hero lands in a brutally-armed fortress bang at 7 o’ clock, just as promised to his girl and the enemies, and there is simply no explanation for how he pulled it off. But, ah, that would require thought.

With those movies, Teja operated on the periphery of even risk-taking, where there was a 5% chance of success. Music, comedy and (basically) karma delivered on the 5%. Unfortunately, that taught Teja all the wrong lessons. Instead of realizing that he got lucky on the periphery and needed to move towards the center and make more thoughtful and creative films, he thought he’ll experiment with some risk-taking now, stretching his view on the credulousness of his audiences, and his inability to think up credible plots, much further.

Oka V Chitram is easily one of the most ridiculous movies made anywhere. If you think the title is innovative, you are perhaps the target audience. Even that, however, won’t prepare you for the sheer inanity of what you find inside the theater.

Balaram (Pradeep Pinishetty), a big movie buff, is ridiculed by some friends that he doesn’t understand movies, and that he should try making a movie himself before commenting on them. He is quite crestfallen, and vows that he will make a film by next year’s Deepavali and show everyone. He steals his poor mother’s gold and lands in Hyderabad.

He writes a script keeping his favorite actor Santosh Babu in mind, but the latter spurns him abjectly, saying he won’t make films with newcomers. He attempts suicide, but when his mother castigates him for being a coward, he swears he’ll make a movie with Santosh Babu and release it before Diwali, and even tells Santosh Babu the same.

A great interval point for any movie. However, this is a Teja flick. The man who makes his teen heroes beat up 20 goons single-handedly when they get cornered, instead of coming out of the situation smartly. Smartness is to a Teja flick as smartness is to dumbness.

Over the next few weeks, Balaram lines up his friends and a cameraman using hidden cameras to get Santosh Babu into various different situations in his daily routine, and does a collage of those to create a movie – including duets with tons of group dancers and all – and makes that a superhit.

No, really. You can try this with Chiranjeevi next.

The movie is hailed as the best ever of Santosh Babu, and all attempts by the latter to stall its release fail. To see what all can happen in a Teja film, you should hear the judgement given by a court that upholds the release despite Santosh Babu claiming he did not act in the film and that he was filmed without his knowledge.

Oka V Chitram would have perhaps worked if it were made to be a comedy or a spoof – however, Teja’s purpose is to show how a determined young man battles all odds to do what he wants. And this is how he does it.

To talk about how absurd it is is to actually demean ourselves and our readers, and to dignify this film, but still, here goes.

A movie has 2 hours of running time, and some 200 scenes that have the hero in them. Various scenes have various settings, various dialogues and various co-actors. Scenes from one location to another have to blend in terms of co-actors and dialogues. You are trying to achieve all this without the hero even realizing it.

It requires enormous thought to convince your audiences of how this was pulled off. On screen, what you see is the gang filming 4 assorted scenes that have nothing in common, and finally releasing it as a coherent movie that is actually hailed by critics and audiences alike. As is his wont, Teja doesn’t explain anything.

To cut a long story short, this one is the epitome of Teja’s assessment of his audiences.

To also give credit where it’s due, the performances are all quite good, as is always the case with Teja’s films even when those cast are all newcomers (Uday Kiran being the lone exception). The film is active at all times, and there are plenty of innovative comic moments. It’s just for these that the rating has an extra half.
Share. Save. Connect.
Tweet
OKA 'V' CHITRAM SNAPSHOT

has never been a conventional director, all his movies are fresh.

The real piece of wholesome entertainment. Dont miss it folks.

RATING
10
Oka Worst Chitram on 23rd May 2006, 8:51am | Permalink
On sunday i saw a program on ETV in which the hero and another actor of this movie were the chief guests, I was so irritated to see them that they are begging like anything to everybody who are calling to this program to watch this movie. The worst movie, the worst actor, the worst direction.
RATING
4
Reality on 22nd May 2006, 8:46am | Permalink
The story is a copy of Bowfinger, but I can see where the director screwed up,, coz in Bowfinger all that Eddie Murphy's character has to do is get scared and run. and it was pretty well done in Bowfinger. The two stars are for Bowfinger, the original.
RATING
4
Cummon on 21st May 2006, 1:03am | Permalink
its a freemake of bowfinger..but should say that it was done quite innovatively..though would have liked them to acknowledge their debt..atleast say that they got "inspired" by it..and well what is it with fullhyd reviewers? the funny lines are gone..and they seem to try too hard to sound witty..well wit isnt muscles, so u cant beat it into shape! and further what is the prob with teja that they have? i mean does a raghavendra rao movie has sense or for that matter any shahrukh's or the pretentious guys' aamir's or speilberg's for that matter?!! they should realize by now that people dont go to a movie to watch sense...if they want they can always get it on discovery channel! :)
RATING
10
LEAVE A COMMENT
fullhyd.com has 700,000+ monthly visits. Tell Hyderabad what you feel about Oka 'V' Chitram!
MORE MOVIES
Latest Reviews
Madam Chief Minister
Red (Telugu)
Master (Tamil)
Master - 2021
Krack
more
12 O Clock
Solo Brathuke So Better
Bloodshot
Angrezi Medium
Baaghi 3
Palasa 1978
Sonic The Hedgehog
Kanulu Kanulanu Dhochaayante
Thappad
Kannum Kannum Kollaiyadithaa...
Contemporary Reviews
Parasuram
Pedababu
Chatrapati
Spiderman 2 (Hindi)
Starsky And Hutch
more
Dance Like A Man
Veede
Neeku Nenu Naaku Nuvvu
Swami
Pandem
Madhyanam Hatya
Dil Jo Bhi Kahey
Lady Bachelors
King Of Bollywood
Random Reviews
Ankusam
Wrong Number
Nayakudu
Three Kings
Mahanandi
more
Fast & Furious 4
Vedam
Zindagi Na Milegi Dobara
The Amazing Spiderman (3D)
Sahasam
Godzilla (3D)
Lion
Force 2
Dandupalyam 3
Yedu Chepala Kadha
SEARCH MOVIES
Dissatisfied with the results? Report a problem or error, or add a listing.
ADVERTISEMENT
SHOUTBOX!
{{todo.name}}
{{todo.date}}
[
ip{{todo.ip}}
]
{{ todo.summary }}... expand »
{{ todo.text }} « collapse
First  |  Prev  |   1   2  3  {{current_page-1}}  {{current_page}}  {{current_page+1}}  {{last_page-2}}  {{last_page-1}}  {{last_page}}   |  Next  |  Last
{{todos[0].name}}

ADVERTISEMENT
This page was tagged for
Oka 'V' Chitram telugu movie
Oka 'V' Chitram reviews
release date
Pradeep Pinishetty, Vamsi
theatres list
Follow @fullhyderabad
Follow fullhyd.com on
About Hyderabad
The Hyderabad Community
Improve fullhyd.com
More
Our Other Local Guides
Our other sites
© Copyright 1999-2009 LRR Technologies (Hyderabad), Pvt Ltd. All rights reserved. fullhyd, fullhyderabad, Welcome To The Neighbourhood are trademarks of LRR Technologies (Hyderabad) Pvt Ltd. The textual, graphic, audio and audiovisual material in this site is protected by copyright law. You may not copy, distribute, or use this material except as necessary for your personal, non-commercial use. Any trademarks are the properties of their respective owners. More on Hyderabad, India. Jobs in Hyderabad.