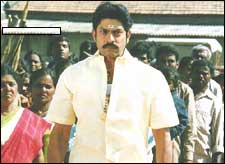 Instead, Pedababu is rather a subdued tale of emotions and sentiments that are part of the family life. Especially if your family seems to have Jagapahi Babu, Suhasini and Sharath Babu in it, and your life seems to have nothing better to do.

Pedababu (a tough looking Jagapathi) is living his life in complete abandonment and solitude. He just has the company of a few million hectares of farming land, a few villages at his disposal, a temple and a dozen mansions. This sorry state of his existence is further blistered with the presence of some jealous relatives.

Top on the list are Pedababu's step brothers. These two people are always complaining that Pedababu gets all the love from their mother when in fact she's not only his mother but also their mother. In reply to their confusing protests, Suhasini (the mother) just stands there and weeps. This reaction is not very surprising to us. Even you'd weep if you were mother to such hopeless actors. Especially when you're not even female.

For some mysterious reason, Pedababu refuses to accept Suhasini as his mother. He always keeps treating her as an untouchable. He refuses to even drink Payasam from her house. No mother can tolerate this kind of behaviour. But Suhasini is not just 'No mother', so she just hams on.

We're shown the reason why after a few decades. Vishwanath is Suhasini's dad and Jagapathi's granddad. When he goes to a fortune-teller, the guy scares him by saying that if Pedababu lives with his parents, they'll die. And then Suhasini and Sharath Babu will then have no role to play in the movie. Already Sharath Babu and Suhasini have no offers at hand, and now this.

So Pedababu decides that he's going to alienate himself from Suhasini, to save her own life. What we do not understand is why he hates her. Maybe because she, being a phenomenal actress, has done a wishy-washy movie.

Meanwhile, the brothers plot a conspiracy to get their sister married to a bad guy when she actually loves another person. Pedababu intervenes as he thinks lovers should belong together. Moreover, any movie with either Pedda or Babu in its title cannot go on without some death-defying action. We almost die at the intellectual levels of the action - death-defying, all right.

In the end, the ironies of all ironies - when Suhasini for some unknown reason falls on the deathbed, she revives only after Pedababu calls her 'amma'. This can be attributed to his prayers of the Lord throughout the movie. And somehow we feel even Suhasini had been praying all this while, because she's called amma only once in the entire movie, still keeping her hopes alive to come back as a heroine.

Anyway, the movie is a clean family sentiment entertainer. Even though the glycerine content is overboard, it has a vague pleasantness about it. Maybe that's because of the good performances by the cast. Sunil and Kalyani provide some comic relief.

In all, Pedababu is a slightly offshoot movie about family sentiments, which is better than most of the love stories around. If sentiment is your thing, this is your bling bling.
Share. Save. Connect.
Tweet
PEDABABU SNAPSHOT

ADVERTISEMENT
This page was tagged for
Peda Babu Telugu
pedababu Telugu
pedababu
Peda Babu
pedababu movie heroine name
Follow @fullhyderabad
Follow fullhyd.com on
About Hyderabad
The Hyderabad Community
Improve fullhyd.com
More
Our Other Local Guides
Our other sites
© Copyright 1999-2009 LRR Technologies (Hyderabad), Pvt Ltd. All rights reserved. fullhyd, fullhyderabad, Welcome To The Neighbourhood are trademarks of LRR Technologies (Hyderabad) Pvt Ltd. The textual, graphic, audio and audiovisual material in this site is protected by copyright law. You may not copy, distribute, or use this material except as necessary for your personal, non-commercial use. Any trademarks are the properties of their respective owners. More on Hyderabad, India. Jobs in Hyderabad.