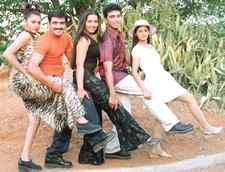 Kiran Nadella / fullhyd.com
EDITOR RATING
1.0
Performances
Script
Music/Soundtrack
Visuals
NA
NA
NA
NA
Suggestions
Can watch again
NA
Good for kids
NA
Good for dates
NA
Wait for OTT
NA
"Love never dies..." the caption for Vendi Mabbulu goes. Only, they forgot to add, "Complete the sentence correctly and save several lives." For, it would've been "Love never dies... but YOU will after watching this movie." That might seem like exaggeration, but believe me, after seeing this film, you'd really want to drive your car into a tree.

The flick jump-starts somewhere in San Francisco, US, with a marriage of one Christopher to one Julia. Guess what? They are the reincarnations of the hero and the heroine, and surprisingly start talking Telugu out of nowhere.

The rest of the movie rewinds to their previous lives. Ravi, the hero, is the managing director of Janaki Ramaiah Publications, and starts to have an affair with a psychotic-killer-cum-writer (Divya), who is a four-time widow (and you know how). He meets Radhika, a nice young girl who loves flowers, falls in love with her and ignores Divya.

Ravi proposes to Radhika one fine day and she accepts readily. Obviously somebody doesn't like this proposal, and Divya kills Radhika in a mysterious incident and portrays it as an accident.

The rest of the movie revolves around finding clues about the murder, which the ghost (yes, you heard it right!) of Radhika keeps littering around Aditi (Ravi's family doctor) and Ravi. Finally Aditi finds out that it is Divya who has killed Radhika. Divya, in the process of eliminating the only evidence (Aditi) for her murder, gets herself killed and Ravi injured. Then Ravi decides to join his sweetheart and kicks the bucket himself. And both he and Radhika reincarnate in the US as Christopher-Julia, and live happily ever after.

In my opinion, the only plausible reason for naming the movie Vendi Mabbulu (silver clouds) was that they appear for a moment in a song. I have the IQ of most Telugu filmmakers to back me up, and I dare you to prove otherwise.

The DIGITAL hype about the movie is all about digital songs. Songs that look like they were made with window paint. I have now learnt that you can make "DIGITAL" movie songs by throwing together special effects. Hey Naren, you do the "flashy things", right? And Narsi, you've got the "green glow and sceneries" under control?

The performances: I dunno why people insist they can be as boring on screen as they are in real life. After this fiasco, the hero and heroine of this one will be lucky if they can manage to get jobs plucking gray strands out of people's hair. The others on screen are equally bad.

The music of this one is such a disaster, it may even resurrect S V Krishna Reddy's career as a music director. And after directing this flick, I think Aditya should be required to sit in on all the screenings of his next movie and take questions afterward such as, "Can I beat the life out of you in the parking lot, or should we get it over with here?"
Share. Save. Connect.
Tweet
VENDI MABBULU SNAPSHOT

ADVERTISEMENT
This page was tagged for
Vendi Mabbulu telugu movie
Vendi Mabbulu reviews
release date
Pulakit, Balayya
theatres list
Follow @fullhyderabad
Follow fullhyd.com on
About Hyderabad
The Hyderabad Community
Improve fullhyd.com
More
Our Other Local Guides
Our other sites
© Copyright 1999-2009 LRR Technologies (Hyderabad), Pvt Ltd. All rights reserved. fullhyd, fullhyderabad, Welcome To The Neighbourhood are trademarks of LRR Technologies (Hyderabad) Pvt Ltd. The textual, graphic, audio and audiovisual material in this site is protected by copyright law. You may not copy, distribute, or use this material except as necessary for your personal, non-commercial use. Any trademarks are the properties of their respective owners. More on Hyderabad, India. Jobs in Hyderabad.