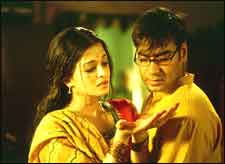 Rohit Murari / fullhyd.com
EDITOR RATING
8.0
Performances
Script
Music/Soundtrack
Visuals
NA
NA
NA
NA
Suggestions
Can watch again
NA
Good for kids
NA
Good for dates
NA
Wait to rent it
NA
Watching Raincoat is like watching a play. A good play, nonetheless. But, in 2D. It is exciting in parts, overwhelming in spurts and aggrandizing in bursts. But that aura of a theatrical performance, that palpation of the senses and that transmogrification of the thought process is amiss. Still, it more than holds its own.

The film is inspired by the works of O Henry. There are three main characters - Manoj (Ajay Devgan), Neeru (Aishwarya Rai) and The Landlord (Annu Kapoor). May be the resemblance is superficial, but it does have some traits of Pinter's 'A Slight Ache', too. Actually, the development of the plot is very similar to it.

There is not much exposition (the sequence of events that tells us about the characters, setting etc.). We get to know of the characters as the story progresses. Most of the play is the conflict - the action that involves the main characters, Neeru and Manoj. The protagonists are estranged lovers, who come together after six years on a rainy afternoon in Kolkata. She is married. He is single and unemployed.

The action slowly builds up as Neeru and Manoj engage in conversation, each weaving a web of deception and deceit to let the other know how perfect his/her life is. There is humor in their tales, but it is dark, very dark. There are elements of satire, cynicism and utter despair.

With the entry of The Landlord, the action reaches its highest point. Manoj learns of Neeru's apathy and the circumstances that have compelled her to live such a life. Mention must be made of Ajay Devgan here. He plays Manoj with such conviction that you almost feel the pain and the suffering he is going through. You empathize with Neeru not because of Aishwarya. You empathize with her because Ajay Devgan socks all her anguish into you.

Post-climax, the action resolves itself. The denouement is gradual, perhaps a little too slow. The plot begins to lose its grip on you a little. But the characters are so static and flat that you almost intuitively think that they would do something anti-climactic. You are awed by they strange relationship they share. They are still very much in love. Unless the plot had said that they were meeting after a hiatus, you would be inclined to think otherwise. There is a sense of familiarity, a sense of belonging to each other. But there is a line, too, that they do not cross. It is so much like the relationship between Jimmy Porter, Allison and Cliff in Osbourne's 'Look Back In Anger'.

As far as the setting goes, the movie adheres to all three unities of Aristotle - unity of place, unity of time and unity of action. The plot is mainly confined to Neeru's drawing room, the action occurs in a timespan of a few hours and all the scenes contribute directly to the plot. Shubha Mudgal's beautiful rendition is in sync with the story, and the director knows what he is doing.

It is the kind of movie that you like to watch every once in a while when you are looking for something beyond the realm of customary filmmaking.
Share. Save. Connect.
Tweet
RAIN COAT SNAPSHOT

The movie is jst too good ..

Iam touched ..one of those flicks which touches ur heart

ADVERTISEMENT
This page was tagged for
rain coat movie
Rain Coat hindi movie
Rain Coat reviews
release date
Ajay Devgan, Aishwarya Rai
Follow @fullhyderabad
Follow fullhyd.com on
About Hyderabad
The Hyderabad Community
Improve fullhyd.com
More
Our Other Local Guides
Our other sites
© Copyright 1999-2009 LRR Technologies (Hyderabad), Pvt Ltd. All rights reserved. fullhyd, fullhyderabad, Welcome To The Neighbourhood are trademarks of LRR Technologies (Hyderabad) Pvt Ltd. The textual, graphic, audio and audiovisual material in this site is protected by copyright law. You may not copy, distribute, or use this material except as necessary for your personal, non-commercial use. Any trademarks are the properties of their respective owners. More on Hyderabad, India. Jobs in Hyderabad.