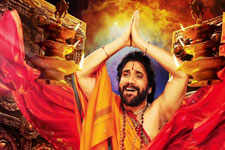 Swaroop Thotada / fullhyd.com
EDITOR RATING
5.5
Performances
Script
Music/Soundtrack
Visuals
8.0
4.0
6.0
7.0
Suggestions
Can watch again
No
Good for kids
Yes
Good for dates
Yes
Wait to rent it
Yes
The Nagarjuna - Raghavendra Rao devotional films have become a genre unto themselves. A slightly revisionist take of devotee dramas that are very conscious and cautious of the commercial appeal and narrative tautness needed, to the extent that they never shied away from comedy tracks, cleavages and the timeless fruits-on-the-navel routine. But be it the evergreen Annamayya or the almost equally good Sri Ramadasu, what outshined all this desperate glamourization and blatant exaggeration is how consistently excellently Nagarjuna fleshed out his performances every time.

Nagarjuna's tearful eyes have their own way of portraying boundless adulation and borderline-destructive obsession towards his beloved God. In all the earlier films (barring Shirdi Sai, in which he plays the saint instead of devotee), his momentary separation from the Almighty and his eventual suffering never simply stood as a show of his prowess but also evoked a deep empathy in the viewers. And Nagarjuna doesn't disappoint this time either.

But there is only so much that a performance can shoulder when the drama is crippled. Hathiram Bhavaji's story, despite being heavily fictionalized, doesn't have much dramatic appeal. When Ramadasu finally dares the Lord singing "evadabba sommani kulukuthu tirigevu ramachandra", you marvel at the enigmatic silence of God that doesn't mind his dying devotee. That's what Om Namo Venkatesaya lacks. There is an enchanting chemistry between God and the devotee, but there is no conflict. God appears too easy, too soon and too frequently. And it robs you of your painful wait for the ultimate redemption.

Rama (Nagarjuna) is hell bent on seeing God, and is advised by his guru (Sai Kumar) to do a tapassu (penance). God appears, but in a child's disguise. Rama doesn't recognize Him and shoos Him away. When it later dawns upon him, he repents, and is now even more desperate to again meet Him. He visits Tirumala, and eventually becomes Hathiram Bhavaji.

As is the norm, there are songs at every turn, but only a few stand out just like in Annamayya or Ramadasu. In the latter films' case, it is perhaps because we already knew Annamacharya keerthanas and Ramadasu songs even before those films came out, and the music had a familiarity to build on, that the popular songs had it easy. Keeravani however compensates for the lack of that advantage here with the background score, that thematically rhymes with Gopal Reddy's grandiose and scenic shots of the Tirumala hillsides.

There is an excellent two-minute montage of Rama being immersed in reading the sthala-puraanam of Tirumala, handed over to him by Krishnamma (Anushka Shetty), and He is all over the lush scenery around the temple, relishing it. This montage, peppered by Keeravani's devotionally charged tunes, is so soothing and powerful that it outshines the preceding and succeeding bland scenes. And that explains to you what didn't work out this time.

The emotions do not click in this overtly fabricated drama that is clever enough to take liberties with the story but not brave enough to venture a little too far in that direction. The film is so content with the glorification of the central character that it overestimates the impact of those scenes that overstay their welcome. Bharavi's dialogues with poetic ambitions get too cheesy too often.

The makers gathered enormous information about Hathiram Bhavaji, but instead of benefitting from that, the film suffers from it. For they have tried to cram every little contribution of Bhavaji into the story, and that makes this feel like a glorified documentary at times. Also, the dull political subplot involving the corrupt Govindarajulu (Rao Ramesh) and Krishnamma's flashback involving a completely unnecessary Jagapathi Babu are neither revelatory of the characters nor enrich the narrative.

Saurabh Jain's tall frame and cheerful demeanour embody the omnipotent yet impish God he is supposed to portray. Pragya Jaiswal's Bhavani looks needlessly caffeinated, but Vimala Raman's Padmavathi is cute. The comedians overdo it as always - only Lord Venkateswara might know why Raghavendra Rao is so insistent on comedy tracks though they have rarely proved to be of any use.

Om Namo Venkatesaya makes for a good watch for the fans of Nagarjuna and the fans of Balaji. The tidbits about the various poojas and practices and how they came into existence in Tirumala might be of interest to some. And if not for anything else, you might want to see it for the fact that this might be the last devotional film from the Nag-KRR combo.
Share. Save. Connect.
Tweet
OM NAMO VENKATESAYA SNAPSHOT 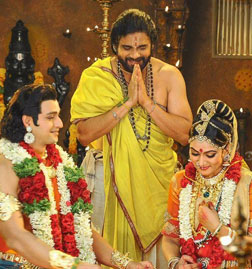 ADVERTISEMENT
This page was tagged for
om namo venkatesaya full movie
Om Namo Venkatesaya telugu movie
Om Namo Venkatesaya reviews
release date
Nagarjuna, Sai Kumar
Follow @fullhyderabad
Follow fullhyd.com on
About Hyderabad
The Hyderabad Community
Improve fullhyd.com
More
Our Other Local Guides
Our other sites
© Copyright 1999-2009 LRR Technologies (Hyderabad), Pvt Ltd. All rights reserved. fullhyd, fullhyderabad, Welcome To The Neighbourhood are trademarks of LRR Technologies (Hyderabad) Pvt Ltd. The textual, graphic, audio and audiovisual material in this site is protected by copyright law. You may not copy, distribute, or use this material except as necessary for your personal, non-commercial use. Any trademarks are the properties of their respective owners. More on Hyderabad, India. Jobs in Hyderabad.